Congratulations to Hoda Afshar who has won the $30,000 William and Winifred Bowness Photography Prize. The Melbourne‐based Iranian‐born artist was selected from a pool of 50 finalists for her black-and-white image, Portrait of Behrouz Boochani, Manus Island, 2018.

Brand said of the winning work, “The judges were very happy to recognise this photograph as a most worthy winner of the prize. It’s a great work of art; a photograph that doesn’t just preserve the dignity of the subject, but shows the viewer what has happened to this person, how this person has gone from being a writer and film maker to becoming a refugee, and what that has done to him as an individual. We think it’s wonderful that this one photograph could show this, and hopefully connect with a very broad audience in Australia.”

In depicting the strength and individuality of a man held in detention, Afshar has made a work with a strong political message, a point she made clear in her remarks after receiving the award.

“Winning the Bowness Photography Prize with this portrait of Behrouz Boochani is not only a glorious moment in my career as an artist, but also a confirmation of the trust that I have always placed in the power of art to change the world through changing the way we see it,” Afshar said.

“The selection of works on display every year shows us what is at stake, and receiving this award is for me a testament to the fact that what is at stake today is our humanity. I hope that winning this prize will contribute, in some way, to redrawing the lines that divide us and those who have been placed outside the safe borders of our human community.”

In her artist’s statement, Afshar recalls Behrouz Boochani’s response to her photograph. “I sent this portrait to Behrouz after I returned from Manus in April 2018, and called him. I said, ‘This is you, Behrouz, with your passion, your fire, and your writer’s hands. It symbolises your resistance.’ He heard this, and paused. ‘You are right,’ he said. ‘But I do not see myself in this picture. I only see a refugee. Someone whose identity has been taken from him. A bare life, standing there beyond the borders of Australia, waiting and staring.’ He fell silent, then said, ‘This image scares me.’”

Shelley Horan, Darren Sylvester and Cyrus Tang all received honourable mentions. Works by all 50 finalists in the William and Winifred Bowness Photography Prize are on show at the Monash Gallery of Art until 18 November. Visitors can vote for the People’s Choice Award. 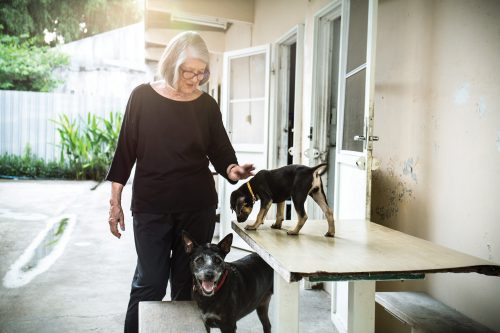