Bringing together artist run initiatives (ARI’s) from Australia and New Zealand, Hobiennale (HB17) aims to celebrate and strengthen their place in the art ecosystem, and add another dimension to Hobart’s art scene.

In HB17, 83 artists will present work in 18 exhibitions across 12 venues in what the organisers call “one big, busy, arty party.”

Held in pre-existing galleries and unusual spaces throughout Hobart, the festival will also consist of musical performances and talks.

“We decided to start Hobiennale after having conversations around what artist run initiatives are and how they function, going to multiple conferences, and feeling the climate nationally,” says Liam James of Constance ARI in Hobart. “We were tired of conversation and wanted to see action instead; to express what we were seeing and support these organisations that we felt are the under spoken for in the visual arts sector.”

“Quite often ARI’s are spoken about as just another stepping stone in an artist’s career”, says Grace Herbert, who is the co-facilitator of HB17 along with James. “But actually I think because ARIs are independent spaces they’re not so beholden to a bunch of agendas, like a lot of institutions and council spaces are, so they have the freedom to be quite critical and political”.

Sebastian Goldspink, co-director of ALASKA Projects in Sydney, mirrors this sentiment noting the need to break the assumption that the ideal artist’s career travels a linear trajectory from art school, ARI, commercial representation, to a survey show in an institution. “The reality is that there’s greater fluidity between these spaces,” he says. “I think about an artist like Mike Parr who has ticked all those boxes but comes back to smaller independent spaces both locally and internationally because they are places for experimentation”.

Hobiennale also aims to reinvigorate ARI’s in Hobart’s art scene, and the festival includes seven local spaces. Madé Spencer-Castle, curator at Bus Projects in Melbourne says, “so much attention is swallowed up by MONA, and I feel like bringing audiences down for a reason that isn’t Dark Mofo or MONA FOMA is really important. It’s about them as an independent scene forging their own path through extending networks out to artist run spaces over Australia and inviting them to participate.”

While ALASKA Projects is 15 years of age, Hobiennale includes new young ARIs such as Play_station from Wellington. They are presenting a solo show by Christopher Ulutupu who uses early 1900s Pacific postcards as a starting point to explore past and present ideas of the romantic picturesque. Bus Projects is presenting a voice work by Makiko Yamamoto which will be held in the Tasmania Museum and Art Gallery’s Bond Store. Moana from Perth is curating a group exhibition titled Light as a Feather… that looks at the continuing cultural influence of the teen witch.

“We’re really interested in the way that magic manifested in the 1990s and in the early 2000s as a reaction to political turmoil, and new European politics in particular,” says Emma Buswell of Moana. “How magic became this tool or device for popular culture to engage with ideas of freedom and bettering one’s life through giving control to greater powers or something that’s outside of your own sphere of reference.”

Hobiennale doesn’t have an overarching theme so each ARI has the opportunity to showcase work that best represents their respective communities. 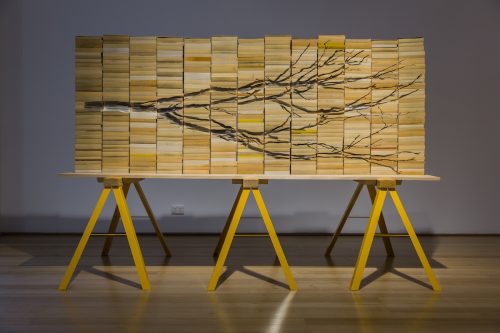 Kylie Stillman: The Opposite of Wild

Kylie Stillman’s work addresses big issues, such as the environment, in an intricate, delicate way. Her work is an invitation to pause, interact and reflect on our relationship with nature. 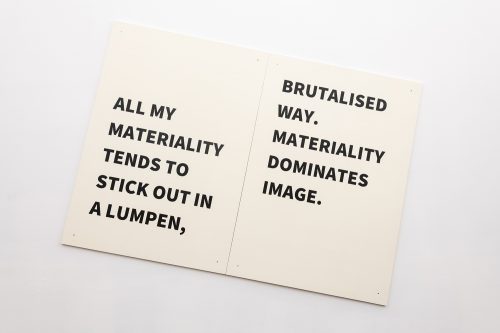 Mike Parr’s The Eternal Opening takes place in a replica of Anna Schwartz’s Melbourne gallery that has been placed inside Carriageworks.