Hito Steyerl: Factory of the Sun

Hito Steyerl: Factory of the Sun

“Our machines are made of pure sunlight,” an ethereal voice-over proclaims. A cloud of CGI particles dances across the screen; swoops, coalesces, becomes a cloud of lightbulbs. A lanky figure in a gold bodysuit appears, dancing in white space.

In Hito Steyerl’s immersive video installation Factory of the Sun, the gallery’s dark walls, floor and ceiling are illuminated by a grid, lines glowing a cold blue. Reclining on deckchairs scattered through the space, we are inside the blank slate for a million possible virtual environments. Our focus is directed to a giant screen, suspended on scaffolding.

Threading through the work are a number of different narratives. First is the titular video game, in which ‘forced labourers’ in a motion-capture studio must use their movements to produce artificial sunlight. Intersecting this is the story of Yulia (Steyerl’s real-life assistant) who describes her family’s flight from the Soviet Union while demonstrating the properties of a Sig Sauer gun.

“The first time I shot anything I was in Japan,” Yulia says, aiming the gun, the camera circling around her.

“I was attending an all-girls’ Catholic high school, and they had a gun club there.” Gold busts of Stalin loom towards her, exploding as she fires.

Yulia’s brother is a YouTube star, clad in a gold bodysuit, beaming out dance videos from his parent’s wood-panelled Alberta basement. He’s a hit in East Asia, where fans have turned his dance moves into anime-style characters. These characters appear within the video game as students killed in near-future protests. “When I respawned,” says one, “I could bend light against itself.”

Against a dreamy, tinkling soundtrack is drone footage of the now-crumbling Teufelsberg Listening Station in West Germany. Built by the US National Security Agency during the Cold War, this tower stands on an artificial hill made from the debris of Hitler’s Germania (including a buried Nazi military-technical college). One regime of surveillance constructed on the bones of another.

Yulia’s grandfather, she says, was stuck outside of the Soviet Union when a border shifted during conflict.

Trying to re-enter Russian borders with his family, he was told “You are the enemy,” and shot on the spot.

In a fictive news clip, a representative from a major bank justifies shooting a protestor with a “corporate drone.” The slang term for office worker seamlessly morphs into a remote killing machine. “A terrorist hid behind him,” he says. “Not really, but a terrorist might hide behind him. I can tell you whatever I want.”

Factory of the Sun operates on the precipice of our current digital landscape and our imagined near future. In this fever-dream of neoliberal late capitalism, our bodies respawn, dance, morph, enact corporate labour. The “artificial sunlight,” of course, is a re-casting of the light from screens. We are obsessed with YouTube videos, we are surveilled, we engage in political uprising, we mimic and multiply. In the cold blue light of the grid our bodies are suspended in a myriad possible realities, irrevocably connected. 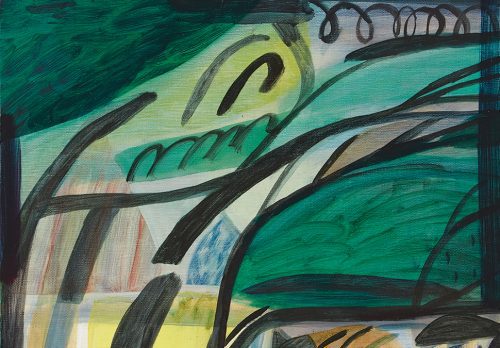 Spanning paintings, drawings on wood and installation, Ferretti’s exhibition continues her characteristic blend between figurative scenes, alongside a tendency towards abstraction. 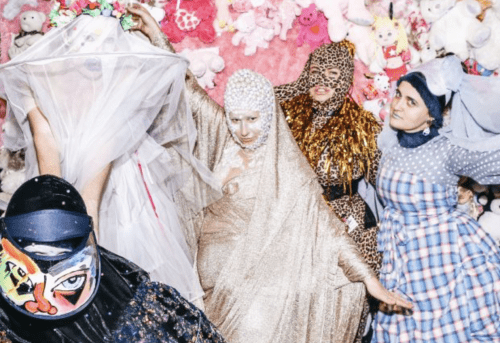 Adorn explores how items we put on our bodies are invested with meaning – not only by their creators, but by the people who wear them. The result is a series of stories as varied as the individuals who wear the objects.