One is the meticulously planned crucible of Australia’s bureaucracy, the other an ocean-licked, sunburnt leisureplex. There might seem little to relate the Gold Coast with Canberra, but if, like curators David Broker and Rebecca Ross, you compare notes, similarities abound.

Both cities materialised abruptly, as modernist projects of the post-war building boom. David Broker explains that each encapsulates a different aspect of the Australian psyche: “The Gold Coast was built around holidays and parties. It’s all about a good time. Canberra was built for politics. It struggles to be a capital city, despite having the national institutions and offering the Australian dream of a property with a garden.”

Both cities are real-estate obsessed, promising a quality of lifestyle determined by proximity to water or green space.

Anna Carey’s small-scale sculptures log the persistence of “sad and empty” tourist motels, venerating their long-faded glamour (in some modernist time warp). Monique Montfroy’s photographic series Not Only Locals documents the excesses of beachside leisure. Everything is overexposed: blinding sun, fluorescent bathers, everything hanging out. “It’s a
really harsh light,” says Broker. “You can see everybody’s wrinkles. It’s funny, but it’s not.”

High Rise Low Rise balances pride and embarrassment, scrutinising the outmoded utopian proposals made by each city. “The cringe factor comes from representing how Australia sees itself: the glitz, the inferiority complex. That brought us together in the end”. 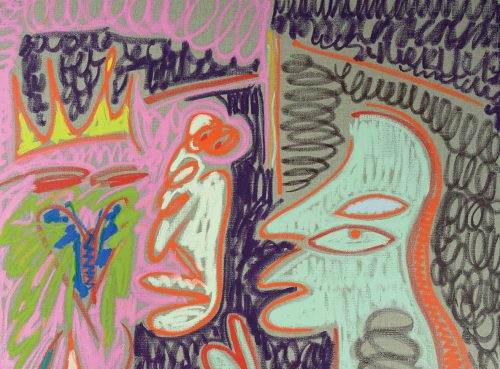