In an online video interview published by Un Magazine Isadora Vaughan speaks with contagious enthusiasm about working with sculpture. “I’m really interested in what ‘the world’ is made of, not just on a geological but on an emotional and social level,” she says. “I find it exciting that sculpture can, directly and indirectly, explore what we are all made of.”

This, to me, is the fundamental appeal of Vaughan’s practice – how she works with materials to heighten their raw, visceral appeal and connects the viewer’s body to the earth and a wider, perhaps cosmic, state. It’s a muddy and alchemic tendency, gritty and rife with soft science-fiction undertones.

In Gaia not the Goddess, an installation of sculptural objects packed tightly into the project space at Heide Museum, Vaughan continues her exploration of materials creating a speculative environment. The materials, when listed, have a rough poetic resonance: bitumen and thermoplastic; hemp and lime; unrefined beeswax and steel; Mt. Gambier limestone; mycelium; ceramic paperclay and vitrified rock. At first glance, these materials appear natural, but most have been altered for industrial purposes – a deviation from their organic origins. Bitumen, a by-product of the fuel industry, thickly lines the gallery’s floor on which the sculptures sit. An elegant lattice fence structure encased with wax from Heide Museum’s bee colonies is placed diagonally off to the centre. Facing this is a pile composed of hemp and lime, recalling the composition of a termite mound. To the edge and propped against the wall stands a pale blue sculpture made of folded thermoplastic that resembles a cocoon.

In places on the bitumen, mycelium (a thread-like part of fungus) sprouts. Parallels between the artificial and natural world can be gleaned from this installation: construction materials for human housing are on the same plane as beehives and ant colonies, suggesting that these habitats are equal.

Vaughan holds contradictions together in her practice, albeit without framing in oppositions such as ‘nature/civilisation’ and ‘human/non-human’. A medley of complex interconnecting theories informs her work – including queer and feminist theory, eco-theory, and New Materialism which opposes binaries, othering and essentialism. The title of the show reflects this, alluding to the Gaia hypothesis that sees the world as a complex ecosystem of the living and non-living matter but rejects the idea of the earth as ‘goddess’ – the divine ‘mother nature’ who is part of the man/woman binary.

The last work I encountered by Vaughan was in the 2018 TarraWarra Biennale: From Will to Form. Titled Canker Sore, 2018, it was constructed from ceramic pieces and composed in a fractured half-moon shape which interacted with the outside green vista below and the viewer before it – radiating a mix of vulnerability and strength. In Gaia not the Goddess the works, in contrast, converse with each other as opposed to the outside world: the materials create their own system, perhaps suggesting how the human, the organic, and the inorganic associate.

Gaia not the Goddess is showing at the Heide Museum of Modern Art, Melbourne until 23 June.

This piece was originally published in the May/June 2019 print edition of Art Guide Australia. 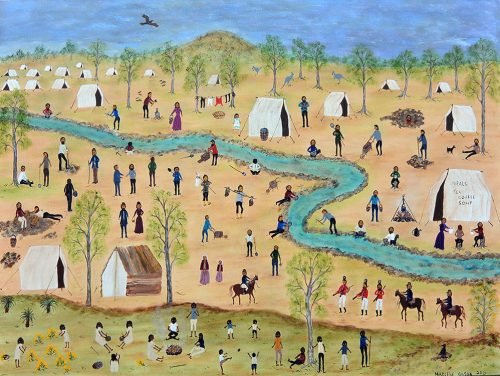 With an eye for capturing the colonial holds of history while communicating her profound spiritual connection to Country, in My Place – Before Marlene Gilson paints the history of her home.