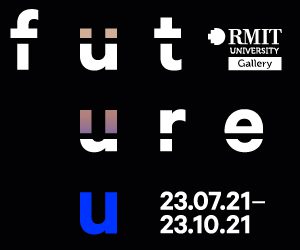 Crafted in neon blue, Canadian Indigenous artist Joi T. Arcand’s latest installation, delivered in Cree syllables, has been built to pulse and glow in a wall cavity at the National Gallery of Victoria’s NGV Triennial.

Her chosen words translate in Roman orthography as pimiciwan pimatisowin, which roughly means flow of water, and in turn flow of life.

But Arcand, 38, who grew up on Muskeg Lake Cree Nation land in Saskatechewan, has often found that withholding translations of her works is an effective strategy: she prefers to get gallery visitors to look up her words and thus learn a little Cree.

“A lot of people want to be hand-held through meaning and understanding,” Arcand explains from her home in Ottawa.

“I want people to spend time with the shapes and the letters. I want them to think why they can’t read it; I want them to question that power imbalance.

“I want them to feel uncomfortable, maybe, at the fact that they are used to being catered to, especially here in Canada—with English and French being the official languages, it’s pretty easy to go about your day without being confronted with any ‘otherness’.”

In Canada, there are more than 70 First Nations languages spoken, and more than 100 dialects. The loss of languages is similar to the experience of Aboriginal and Torres Strait Islander people in Australia: here, about 120 Indigenous languages are still spoken, but this is much less than half the number in use at the time of European colonisation.

Arcand is yet to visit Australia, but nonetheless feels an affinity with the losses of language and culture suffered by First Nations people around the world, including those of Aboriginal Australians.

“There’s always that relationality that you feel with other Indigenous groups, so I’m hoping the work will speak to Indigenous folks from all over the world,” she says.

Following the International Year of Indigenous Languages in 2019, does Arcand sense a turn back to First Nations languages, particularly given their entwinement with land and country as the world deals with the environmental shocks of industrialisation and global warming?

“I think so. The language and the land are interconnected in so many ways that you really have to understand the language to get those really specific teachings about the land. That’s something I’m trying to learn. It’s something that makes the language-keepers, the people that are still fluent, really precious.”

Arcand felt connected to Cree culture and philosophy during her childhood; in recent times, Zoom conferences have supplemented her learning of language and culture from the living room of her Ottawa home.

“It was a special experience growing up on the reserve around my family and my people,” she recalls. “But colonisation still heavily impacted us, which is why I’m not fluent in my language, so I still have to learn as an adult.”

During college, Arcand spent several summers working in the Muskeg Lake Archives, which consisted mostly of photographs from the community. Her job was to scan and input these images into an electronic database to allow people and subjects to be easily searched.

Later she worked in layout and design using Cree and other First Nations languages, at the Saskatchewan Indigenous Cultural Centre. Some of Arcand’s earliest art practice consisted of photography, digital collage and graphic design.

Arcand first turned to neon in 2017 when working on a light installation that would immerse people in the Cree language, “because neon really has its own energy; it also reminds people of a nostalgic feeling”.

The same year, she started the brand Mad Aunty, for which she designs and sells T-shirts and laser-cut and 3D-printed jewellery from cursive and syllabic Cree words.

“It was a way to make my work as accessible to as many people as I can, and to make the work visible in wearable art,” she says. “So a person could buy a pair of earrings instead of a neon sign.”

Arcand is keen on sometimes using the maligned Comic Sans font for this jewellery. “As a graphic designer I’m aware of the flack that often gets put onto that font, however I think it is a really accessible font and that’s why it is so ubiquitous; everybody has it, and it’s also extremely easy to read.”

In naming her brand, the use of aunty “was to honour the role of the aunty, which is very prominent in First Nations cultures; it’s a term and role of respect. I’m an aunty to a lot of people, and the ‘mad’ was just more of an inside joke,” she laughs. 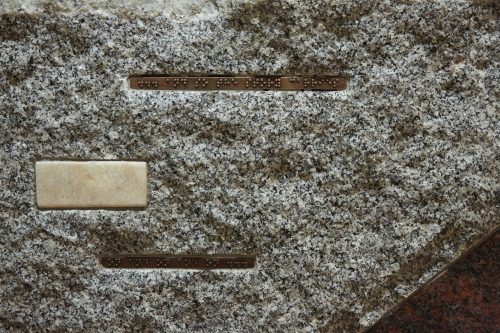 Aiming to “reclaim the agency of blindness,” Fayen d’Evie’s poetic and tactile work at West Space explores how we perceive art, in ways both physical and conceptual. 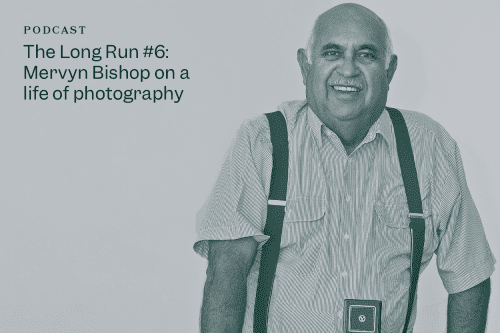 The Long Run #6: Mervyn Bishop on a life of photography

“Black and white photography has always been my…I suppose it’s just kind of my life,” says Mervyn Bishop on his 60-year photography practice.