The new Granville Centre Art Gallery in western Sydney opens this month with a resounding statement of First Nations strength and solidarity. Ngaliya Diyam focuses on the local community and presents First Nations artists from, or living on, Darug country, which stretches from the coastline to the mountains.

The exhibition title is Darug for ‘we are here.’ From the outset, independent curators Rebekah Raymond and Dennis Golding worked with community to develop Ngaliya Diyam. “There’s this generosity with the Darug community to welcome and care for any Aboriginal and Torres Strait Islander person that comes to Darug land,” says Raymond. That flowed naturally into the selection of artists and wanting to show “people from all different language groups, coming together and caring for each other in so many different ways,” she says.

Many of the works in Ngaliya Diyam foreground care and custodianship of culture. A 2002 shellwork sculpture of the Sydney Opera House by Aunty Esme Timbery is shown alongside new work by her daughter, Aunty Marilyn Russell, which was commissioned for the exhibition. “For us, it was important to commission new works, especially in this year when a lot of people have lost income,” Raymond says.

Golding says shellwork has been handed down to Timbery and Russell through many generations, and their works express “that strong history of the La Perouse Aboriginal women of this cultural practice”.

Lucy Simpson’s multimedia installation, Necklace for a Boy, 2016-2020, speaks about sovereignty. The work expands on a project made for the Australian Design Centre in collaboration with community around Walgett in New South Wales. Necklace for a Boy centres on a photograph of a young boy, surrounded by a field of suspended stones. The stones are “vessels for stories of knowledge,” says Golding, but the objects in the installation are casts. Critically, the originals remain in the care of their community.

Kirra Weingarth’s ceramics are pit fired in the earth, a process which sees her works being physically held and shaped by Darug country. Shay Tobin’s paintings also fuse old and new, bringing together a wide set of cultural influences and personal reference points. Nadeena Dixon, known primarily as a master weaver, has completed a major installation called Transcendence, 2020. Another new commission, it brings found objects and projection together, linking them with string to suggest, as Raymond puts it, “time and the ways that we’re all connected.”

Ngaliya Diyam also includes video of dance performances by Jannawi Dance Clan, alongside various objects used in their performances. “We wanted to include dance as a practice because it is so important to culture, to gathering people and transferring knowledge, and Jannawi does this so beautifully,” says Raymond.

Beyond Ngaliya Diyam, Granville Centre Art Gallery curator Talia Smith confirms that the new gallery will continue to focus on the local. But, she says “we also think of community as something much broader than just where we are located.” Future plans include programming for different local audiences and partnering with organisations like Parramatta Artists’ Studios to explore “what community can mean.” 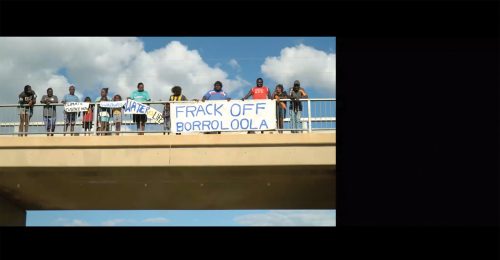