On 27 September 1956, the first bomb was dropped at the atomic test site at Maralinga in South Australia. It was the large-scale painting, Maralinga Before the Atomic Test by Jonathan Kumintjarra Brown, in Burrinja’s collection that piqued the curiosity of JD Mittman, curator and manager of collections at the Dandenong Ranges based cultural centre.

It is not hard to see why it spurred Mittman to base a major travelling exhibition around its subject matter. At over two by two metres, the painting is imposing, rendered in ochres, sand and kapoc. It describes an idyll in the artist’s country, which achingly, he was never able to experience for himself.

“People died as a result of a mysterious black mist that rolled over the country.”

“I read about [atomic testing] in the 1990s in the autobiography by Yami Lester. He talks about his blindness as a result of the atomic explosion at Emu Field in the 1950s and how his family got very sick… people died as a result of a mysterious black mist that rolled over the country.”

It is a story that warrants a wide audience. Black Mist Burnt Country features dozens of works from over 30 indigenous and non-indigenous artists and commemorates 60 years since British atomic testing began in Maralinga. The repercussions of those Cold War days left a fatal stain not only on Maralinga, but the country around Emu Junction and Montebello Islands in South and Western Australia. Places remote, yet not uninhabited.

Mittman is perhaps an unlikely spokesperson for the resulting environmental and human ruin. Having grown up in West Germany in the 1980s, “I did not know much about atomic testing in Australia,” he says. But he found that people who had grown up here also “didn’t seem to remember the tests, know about their ongoing legacies or contemporary nuclear threats” – such as the terribly ineffectual clean up efforts of the contaminated land in the 1990s before it was handed back to the traditional owners.

“The devastation caused to the land, not only by seven nuclear devices which had been exploded there in 1956 and 1957, but by over 500 so called ‘minor’ experiments, some of which had spread highly-toxic and long-lasting plutonium across a vast area of the land.” Activists have called the willful neglect of remote communities ‘radioactive racism’.

Unpacking the intricacy of this dark chapter of Australian history required, a multi-pronged approached. Mittman decided to present “a broad spectrum to give visitors as many access points in this complex story as possible.”

This includes Australian artists who dealt with similar themes, such as Sidney Nolan who “retrospectively added a demonic mushroom [cloud] to a painting of his famous Central Desert series”, Arthur Boyd who took part in anti-atomic marches in Aldermaston (England), and Albert Tucker who completed watercolours of Hiroshima after seeing firsthand in 1947, the havoc wreaked on Japan.

Other works were specially commissioned, such as those by members of the Yalata community, who were among those most affected by the atomic testing at the Woomera Rocket Range. Raw and pictographic, the paintings are charged with the responsibility of imparting the story to the next generation.

A huge canvas painted by a dozen younger women of the community was the result of a collaborative workshop that Mittman initiated. He says that there was in general, strong support to tell the story, though making the at-best four day round trip journey to Maralinga was a significant hindrance to the show’s progress.

Yami Lester, mentioned earlier, appears in photographs by Belinda Mason and Jessie Boylan, an artist who has previously chronicled a Maralinga whistleblower in a show at QUT. The highly regarded photo-media artist, Rosemary Laing, also weighs in with a photograph of a Union Jack at Emu Field.

On the other side of the fence, so to speak, is British Australian artist Kate Downhill’s work, which references Operation Hurricane, the first UK atomic test in 1952. Her connection to the event? Her father was a British scientist who assisted in this test between the Montebello Islands and went on to develop the British H-bomb.

There isn’t a singular narrative here but the work that underpins the exhibition is the work that started it all. Jonathan Kumintjarra Brown is the only “artist who focused directly and repeatedly on the Maralinga story,” says Mittman.

Born in 1960, Kumintjarra Brown was forcibly removed from his family in Ooldea as a child and raised in foster families in Melbourne and Sydney. Having received a solid education, he pursued Aboriginal studies in Adelaide. It was then that he decided to locate his family. This turned out to be a shattering life event.

“He met family members he did not know, did not speak their language (Pitjantjatjara), and he learnt the country had been desecrated and devastated by atomic testing,” explains Mittman. Fabian Peel, a nurse working at the Tullawon Health Clinic in Yalata, guided Kumintjarra Brown around the country. He recalled the agonizing homecoming saying, “Jonathan cried all the way.” 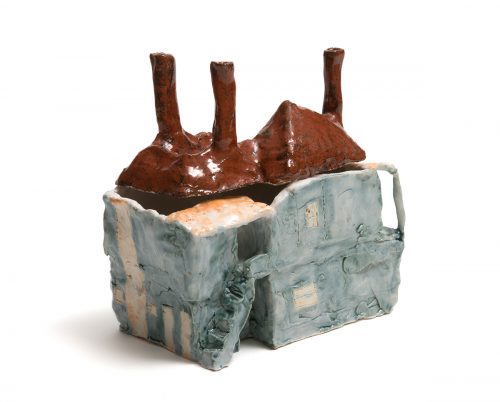 Ceramics shine in All our relations

Handmade ceramics are often described as possessing the marks of their makers. Like an extension of the individual, the clay form is born from within the maker, a direct conduit of imagination and memory. 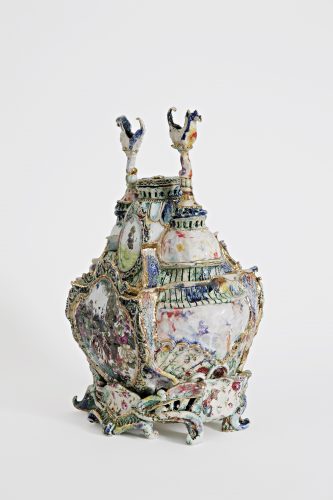