When Angelica Mesiti debuted her acclaimed 2012 video work Citizen Band at the Australian Centre for Contemporary Art, then-director Juliana Engberg told her quietly at the opening, “I’m going to take you to Venice.”

It took a few years, but Engberg was true to her word. Selecting from almost 70 proposals, the Australia Council for the Arts commissioned Mesiti and Engberg as the artist-curator team for the 2019 Venice Biennale.

Exhibiting in the Biennale – La Biennale di Venezia – has long represented a triumphant pinnacle of any artist’s career. Established in 1895, the Biennale of today is focused around two primary locations – the Arsenale, a complex of former shipyards and armouries, and the Giardini, a large public garden featuring the permanent exhibition buildings, or pavilions, of different countries. The recently redeveloped Australian Pavilion is the site of Mesiti’s major new work, ASSEMBLY.

Working primarily in film, Mesiti had an early background in dance prior to training as an artist. She is drawn to non-verbal forms of communication – what she describes as “the creative acts of transformation that allow groups, and individuals, to overcome constraints.”

The Calling, 2014, explores complex whistling languages that developed in Turkey, Greece and the Canary Islands, allowing people to communicate across remote mountainous regions. The Colour of Saying, 2015, sees sign language transformed into choreography. In Citizens Band, 2012, Mesiti creates portraits of four performers with highly skilled musical practices tied to their places of birth: an Algerian man croons with his Casio keyboard on the Paris metro; a renowned world musician whistles a Sudanese melody in the driver’s seat of his Brisbane cab; a Mongolian throat singer busks in Sydney; a water drummer from Cameroon practices on the surface of a Paris swimming pool. Many of Mesiti’s works engage with globalisation and migration, always with beautiful cinematography and a deeply empathetic lens.

“She has just a tremendous sense of humanity in her practice,” Engberg says of Mesiti.

“Even though she’s dealing with some quite complex issues – and certainly the work delves into those areas of complexity around migration and ‘the other’ – there’s always the sense of positive forward movement.”

Engberg describes the production of ASSEMBLY as “pretty monumental.” Involving more than 40 musicians and performers, the kernel of the video work is a poem turned into a musical score. This transmutation was made via an obscure 19th-century invention called the Michela Shorthand Machine. Invented in 1863, the Michela is a stenographic device, using piano-like keys pressed in different combinations to type out shorthand symbols. It has been employed in Italian parliament to record proceedings since 1881; a computerised version is in use there to this day. Given its parliamentary history, Mesiti initially searched for a piece of legislation as the material to be translated by the Michela machine. However, this soon turned out to be a dead end.

“I found that it was very difficult to find anything that didn’t exclude groups or was too specific,” Mesiti says. “That direction was too dogmatic and prescriptive, so I started looking in the direction of poetry.” She ultimately settled on Poem To Be Written In Another Tongue by Australian writer David Malouf, published in 1975.

A richly woven net of images about the impossibilities of translation and disconnection with an ancestral language, Mesiti describes Malouf’s poem as “beautifully written and really expansive.”

“Poetry allows us to make our own personal responses and interpretations of the material,” she says. “It’s generous in that way. It just felt like it was the right fit for this project.” Using the Michela machine, Mesiti transformed the poem into a musical score.

“As the stenographer typed out the Malouf poem, every key that’s been pressed has been recorded as the musical note that is attributed to it on a regular piano keyboard,” Mesiti explains. “What we inherited from the Michela was noise, basically – up to 10 notes being pressed at once.” In the hands of Mesiti’s collaborator, composer Max Lyandvert, these notes were refined and arranged. “We don’t change their sequence at all; we have adapted the space between them and the tempo of the playing of them, and then we arrange them across a number of instruments.”

The completed work itself is “an interpretation of that score through a group of very diverse musicians.” Mesiti worked with 40 Australian performers: classical musicians, vocalists and skilled players of traditional instruments, spanning a range of ages and cultural backgrounds. With a choreography consisting of the assembling and dispersal of bodies, the work is a clarion call for renewed human collaboration in a time of disunity and militantly reinforced boundaries between nations and identities.

“We have gathered and assembled in formal and informal ways since the beginning of time,” says Mesiti, “whether it’s through the sacred or the profane: at a rock concert or a religious setting, or gathering around campfires for storytelling, or for music and song, or for ritual. It’s a human necessity.” 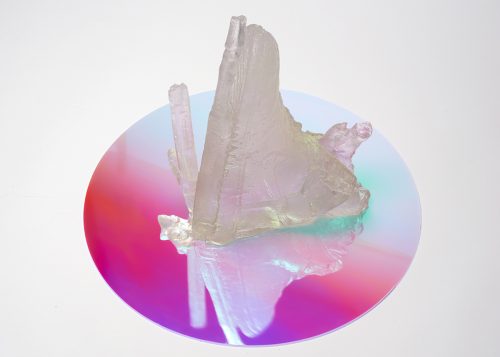 Throughout her career Jasmine Targett has worked with esteemed researchers and organisations, including NASA, and used their research and technology in her work.

Memento, comprising more than a dozen oil paintings, has an elegiac quality. Gannon says the works were mainly created from memory rather than setting up on site for an exercise in “look and put”.