“No painting can exist without the tension of what it figures and what it concretely consists of,” says South African artist Marlene Dumas. Alongside this tension between form and content, it’s also Dumas’s idea that painting does not suspend time but rather “circulates and recycles time like a wheel that turns”. And it’s this understanding of painting that gives the title and theme to Like a Wheel That Turns at the Australian Centre for Contemporary Art (ACCA).

With works by Australian artists Nadia Hernández, Lucina Lane, Gian Manik, Betty Muffler, Jahnne Pasco-White, Jason Phu, JD Reforma and Esther Stewart, each embraces the multidimensional aspects of how painting both responds to and generates understandings of culture, history and technology—all amid the deeply intimate, yet often monotonous experiences of daily life.

This is the third iteration of the Macfarlane Commissions, co-curated by Max Delany and Annika Kristensen. Unlike the previous two series—The Theatre is Lying in 2018 and Overlapping Magisteria in 2020, this iteration includes eight artists rather than five. “We invited eight artists because we were interested in encouraging a greater sense of dialogue between each artist’s work and the greater complexity of intersections between them,” says Delany.

As Delany explains, each artist engages with “contemporary modes of painting, but in expanded ways extending beyond the frame or beyond the realm of the studio”. Delany continues, “The exhibition also relates to more recent considerations of painting in the way painting is informed by new cycles of distribution, circulation and networks.”

Sydney-based artist JD Reforma emphasises his relationship to the interplay between visual and textual expression. “Language has always been foundational to my practice, whether this be language in my actual work or if it’s a part of the process of thinking through ideas,” he says. When discussing the connection between painting and text, Reforma outlines how his employment undoubtedly influences his art. “Language is so important to my practice, but language is also something that I deal with in my day-to-day job in marketing and communications . . . I guess my practice is at the intersection of many different forms of visual and textual communication.”

Reforma’s work, Fibre optics; an intranet of virtue, is vast in scale with 85 paintings integrating layers of paint, coconut husk, found aphorisms and puns. For this work Reforma kept extensive lists of text and expressions recorded from conversations, popular culture and social media. The texts in Reforma’s work read as playfully satirical, but they also expose euphemistic language and social injustices. As Reforma explains, “I explore a lot of different text in this work—some of them push expressions, phrases, terminologies, or jargon to a point of absurdity and others are repetitions of phrases or ideas that have become very quotidian, but in their repetition, other meaning and ideas are revealed . . . puns are a really important way to build different frameworks of understanding.”

The title of Reforma’s work also ingeniously references how it will be displayed. The work will “be installed almost like a kind of roving horizon line . . . with some of the works extending into sentences and others spelling out single words,” he says. “You could think of each painting in a sense as a pixel forming the overall whole of the installation with each independent pixel containing its own symbology of language.”

This exhibition is not a revival of painting in response to the stubborn arguments about painting being dead—what must be departed from are these limiting debates themselves. “We were interested in thinking about painting—but it’s not a survey of painting. It’s not the last word in painting at all,” explains Delany.

The Venezuelan-Australian artist Nadia Hernández will display works engaging with painting as a visual way to acknowledge Latinx diaspora. However, Hernández’s paintings also necessarily celebrate Latin American art, poetry, design and decoration while merging influences of cultural identity and politics. Meanwhile Melbourne-based artist Lucina Lane will present Untitled (An oddly sophisticated self-organised world), a mural-scaled work that is largely comprised of paint found in ACCA’s storeroom. Lane’s approach of painting with discarded materials both acknowledges and challenges what it means to salvage and repurpose not just for the sake of novelty.

Betty Muffler, the renowned Aboriginal artist and ngangkari (traditional healer), is exhibiting an epic painting titled Ngangkari Ngura (Healing Country). Muffler approaches painting through her understanding of Country inherited from her father’s walawuru (eagle) Tjukurpa or creation story. As Muffler says, “My work as a ngangkari runs both through my work as a painter, and also through healing work with the body.” Muffler’s composition of Ngangkari Ngura (Healing Country) reflects the walawuru’s (eagle’s) perspective of being above, as the canvas was positioned on the ground when painted. As Delany expands, Muffler’s art offers haptic sensations as well as the optical. “Muffler’s paintings are expansive in their perspective and insight. They are also informed by her role as a healer. Muffler speaks about the healing of people, but also the healing of Country . . . her ‘open hands’ speak to ideas of touch and the healing power of body and spirit.”

While painting is continually evolving with innovative understandings of the medium, each artist shows their distinctive approach to painting alongside interpretations of architecture, literature, performance, ecology, music and healing. “All of the artist’s demonstrate a dedication to painting,” says Delany, “but with a commitment to other forms and cultural contexts—and when exhibited together they inform each other in reciprocal ways. The exhibition is lively as it engages with painting in a way that intersects with everyday life, and this brings the energy of everyday life into the gallery.”

Like a Wheel that Turns: The 2022 Macfarlane Commissions
Australian Centre for Contemporary Art (ACCA)
2 July—4 September 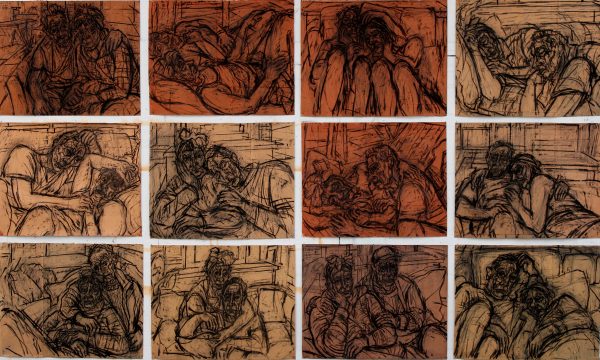 David Fairbairn’s deeply felt, emotive portraits are a soulful meditation on ageing and companionship. For Drawn Together at the Hawkesbury Regional Gallery, Fairbairn has brought new dimensions to his ongoing study of intimacy.