We are living in urgent times courtesy of the climate crisis, with people from Pacific islands suffering more acutely than most. While the exhibition Drowning Not Waving wasn’t planned to coincide with the Pacific Islands Forum, it’s timely that the show opens shortly after that meeting ended with unresolved political tension around Australia’s coal commitments. Drowning Not Waving gives voice to artists who are deeply engaged with the global warming predicament. Their work speaks to both rising seas and the preservation of culture in the face of crisis.

According to co-curator Megan Evans, “Young Pasifika artists are directly aware of, connected to, and affected by the concerns about climate change, so we wanted to make sure they were involved in the show. A number of them are not experienced exhibitors but we wanted to give them a voice, so having them in the show was really important. The more established artists like Jill Orr, Penelope Davis, Emma Davies, Clinton Naina [formerly Nain], and Paul Handley were already doing work in that area.”

Material inventiveness and repurposing of existing items are approaches shared by several artists in the show, often on a considerable scale. “Lantern, 2018, by Paul Handley is a large circular structure made from a lot of children’s life vests,” says Evans. “And Florence Folole Tupuola’s large weaving piece is made from all of her grandmother’s dresses. It’s about the preciousness of her grandmother’s stories. These pieces really resonate powerfully together.”

Other artists in the show similarly transform materials. In Penelope Davis’s Sea-Change, 2017, the artist has cast everyday consumer objects in silicone and assembled them into giant floating jellyfish – the ‘canaries’ of the seas – whose increased numbers are a warning of oceanic degradation. Works by Emma Davies are made of painted recycled plastic. “They look like dead animals hanging from the wall,” says Evans.

Renowned performance artist Jill Orr is represented by large scale photographs from her series Detritus Springs, 2018, and there are also photographs and a video from Ella Benore Rowe. “Her work is about the preservation of culture, about survival and resistance,” says Evans.

White King bleach recurs in Clinton Naina’s work. In I am the Reef, 2019, one of several works from Naina in the show, he has used it to address the bleaching of the Great Barrier Reef. Yasbelle Kerkow’s Cyclone Food, 2018, utilises small corned beef tins. “She says it’s the only thing that survives a cyclone in Fiji, where she’s from,” explains Evans.

“Art gets underneath people’s rational understanding of things and affects people in a more emotional and subjective way,” Evans suggests. “You can tell people about all these issues, but until they feel it in their bones and understand it at an emotional level, I don’t think things change much. That’s the beauty of art in addressing social and political issues.” 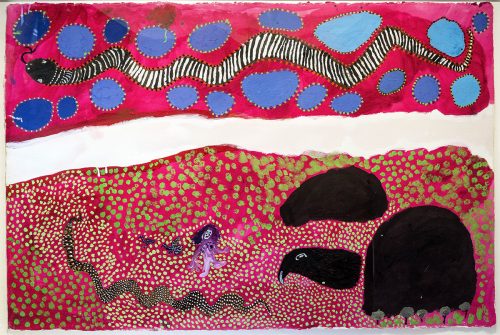 Indigenous artist Yunkurra Billy Atkins has been awarded $30,000 for the Most Outstanding Work in the 2017 Hedland Art Awards for his large scale-work on paper work, Kumpupirntily, which combines political commentary with the Australian landscape. 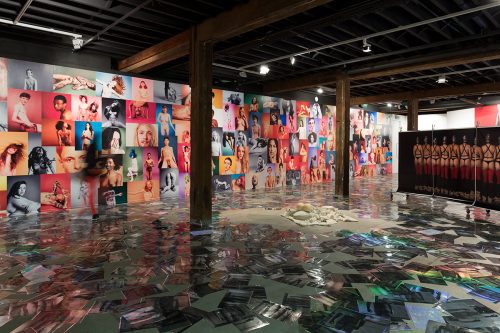 It’s an art historical convention that there is a difference between nudes and naked bodies. Nudes (both male and female) are meant to be pure idealised form, devoid of salacious overtones.