For example, in this exhibition we were asked to consider a video of Brooke Leigh grinding a piece of sandstone to dust along a concrete floor; a spray painted and stencilled portrait by George Gittoes; a series of delightfully sinister sculptures by Suzanne Archer; and the winning work, a photogram by Justine Varga titled Photogenic Drawing, 2018, as drawings. In Dobell Drawing Prize #21 a drawing could be just about anything.

And why not? Aren’t some rules meant to be broken? After all, innovation happens when boundaries are blurred, tested and eventually breached.

And who wants to be the gatekeeper of a strict definition? It’s a thankless task, decidedly lacking in glamour, best suited to the curmudgeonly and pedantic.

Nevertheless, I found myself dissatisfied with this ‘anything goes’ definition of drawing. As a writer, I understand the importance of assigning precise meaning to words: this is how we communicate. And precision, somewhat ironically, allows for subtlety and nuance. If drawing really is anything then the word becomes vague at best, utterly redundant at worst.

Yet finding a reliable definition for drawing proved difficult. A definition based on traditional media (pencil, crayon, charcoal, chalk or ink on paper) is both boring and too restrictive. So too is Paul Klee’s romantic and oft-quoted notion that “drawing is simply a line going for a walk” as it excludes drawings that are all about light and shade, form and mass.

Despite the fact that he did choose to focus purely on line drawings, artist Michael Craig-Martin offered one of the more flexible and inclusive definitions in the 1995 essay he wrote to accompany a broad survey exhibition he curated, titled Drawing the Line. “[S]pontaneity, creative speculation, experimentation, directness, simplicity, abbreviation, expressiveness, immediacy, personal vision, technical diversity, modestly of means, rawness, fragmentation, discontinuity, unfinishedness, and open-endedness. These have always been the characteristics of drawing,” he said.

By this definition (such as it is) most of the 59 works in Dobell Drawing Prize #21 did qualify as drawings, to a greater or lesser degree. A few were too polished, or a bit too contrived, to suit Craig-Martin’s emphasis on modest vigorous provisionality.

But in the end, I was forced to acknowledge that finding a definition of drawing that will work everywhere, all the time, is not only thankless, it is futile.

And anyway, the Dobell Prize for Drawing (like all art prizes), is less about asking or answering a specific question – such as ‘what is drawing?’ – and more about presenting an idiosyncratic slice of current practice: a diverse range of artworks filtered through the parameters of the conditions of entry (as interpreted by each individual artist) and the aesthetic choices of the selection committee.

So it perhaps comes as no surprise to find that even though I’d failed to find a viable answer to the vexed ‘what is drawing?’ question, most of the works that seemed strongest were the non-slashie works. In other words, not the painting/drawings, video/drawings or sculpture/drawings, but the artworks that couldn’t easily be categorised as anything but drawing.

Tanya Chaitow continued the ancient tradition of drawing what isn’t there: rendering the invisible visible and charting the inner landscape. In Frame of Mind, 2018, her figures are chimeras: not animal, vegetable or mineral, but all of the above.

For October 2018, Locust Jones scrawled his own responses to international current affairs on translucent sheets. He then collated these ink drawings in multiple, overlapping layers and presented them on light boxes; a nod to our fixation with screens and the information overload of access to news, 24/7.

The perforated and ink saturated paper of Celestial Cartography No. 12, 2018, by Damian Moss, resembled a complex musical score: a symphony of data, an ode to the beauty of precision and the necessity of chaos.

But for me, the highlight of Dobell Drawing Prize #21 was 365 Days, 2017, a sketchy embroidery by Leonie Andrews. Both tactile and colourful, this piece looked like it was dashed off in an instant –it had the raw energy Craig-Martin admired – yet the artist worked on it for a year. Sewing while blindfolded, Andrews literally drew the line between control and chance; a fertile border zone. Yes it’s a slashie work; boundary-blurring. But as the Dobell Drawing Prize continues to demonstrate, some rules – even (perhaps, especially) our own – are meant to be broken.

Dobell Drawing Prize #21, is showing at the National Art School Darlinghurst, Sydney until 25 May. 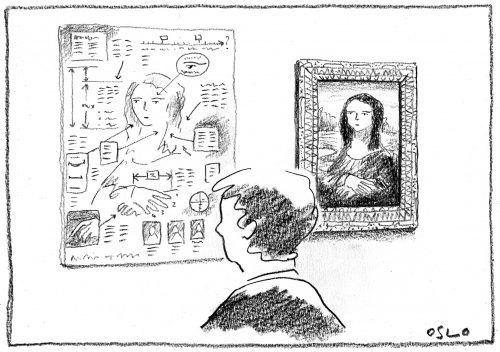 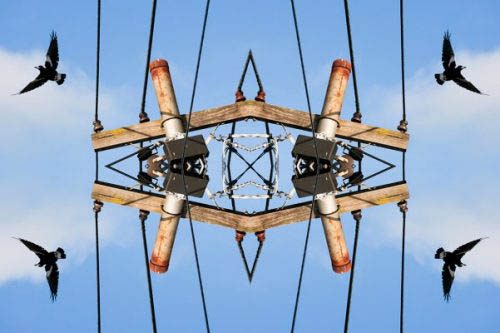 Photography is an important medium for Aboriginal people.