Some may think that art and politics don’t mix, but Deborah Kelly’s survey show Deborah Kelly: Bodies of Work demonstrated unequivocally that the Sydney-based artist is not afraid to stir things up. Armed with a creative arsenal that uses both digital and old school glue-and-scissors collage to pack a visual punch, Kelly weighed in on a wide range of political topics, from class war to the Cold War.

Aided and abetted by an ever-shifting team of willing collaborators, Kelly was not afraid to make some noise about the issues that matter to her, including a whole host of ‘isms’; sexism, racism, classism, ageism and hetero-sexism all come under fire. Nevertheless, this exhibition wasn’t characterised by strident shouting and didacticism.

At the heart of Kelly’s work was an exuberant celebration of diversity, in all its myriad human manifestations. This could be seen most strikingly in her 2014 body of photo collages No Human Being is Illegal (In All Our Glory), which featured in the 19th Biennale of Sydney. Twenty individuals representing a wide range of shapes, sizes, ages, colours and genders were photographed nude and presented life-sized. Two wore nothing but their birthday suits, one was completely obliterated by collaged imagery of natural wonders, but most were adorned by a scattering of pictures snipped from magazines and books.

These colourful additions read like particularly realistic tattoos that have somehow become animated and refuse to be confined by the borders of the body.

Kelly both recorded and relished the weird and wonderful diversity of our particular species, as she says, in all our glory.

In her video Tank Man Tango, 2009, Kelly paid tribute to the lone figure, armed with nothing but two shopping bags, who stood up to the might of the military when tanks rolled into Tiananmen Square in 1989. Conceived to mark the 20th anniversary of the massacre, Kelly recorded people around the world performing a choreographed dance inspired by his heroism.

Elsewhere she took a long hard look at our flaws. In Empress, 2005–2007, a scantily dressed blonde woman, modelled on Marilyn Monroe at her most bombshell-esque, was surrounded by more overtly phallic skyscrapers than you can poke a stick at. Made anonymous by the black rectangle of censorship across her eyes, she prepares to wreak havoc on chauvinistic culture as she bites off the head of King Kong.

In her Hey Hetero! posters, made in 2001 in collaboration with Tina Fiveash, Kelly used a colour-saturated aesthetic lifted from 1950s advertising to highlight some of the basic rights denied to homosexual couples: things heterosexuals take for granted like having a baby, getting married and kissing in public without getting vilified or beaten up. In one image, a gingham-clad, clichéd nuclear family of man, woman and child illustrate the conservative truth:”‘Hey, Hetero! When they say family they mean you!”

In Bodies of Work, Deborah Kelly served up a creative cocktail for those who like their art and politics both shaken and stirred. 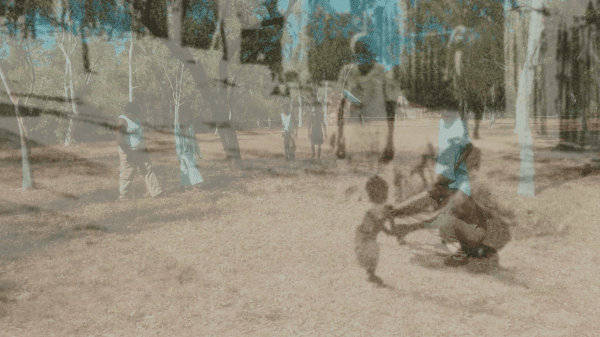 Based in the Northern Territory but internationally renowned, the Karrabing Film Collective look at equality issues such as poverty, incarceration and mining on Country, while also weaving traditional stories connected with Country. Now, Karrabing’s films are showing at Samstag Museum of Art. 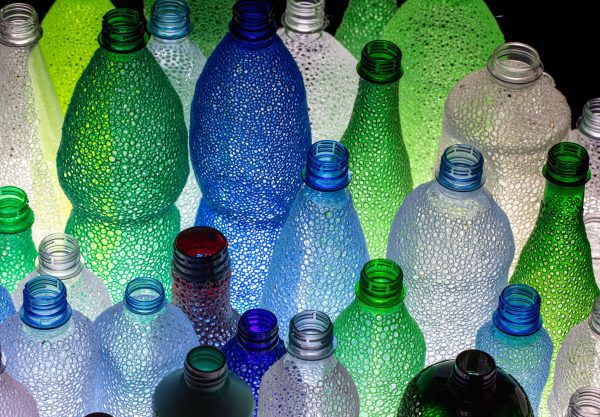 Sarah Goffman and the Applied Arts

In keeping with Sarah Goffman’s long-time practice, Applied Arts is a contemplation of civilisation’s relentless production of waste.