Congratulations to Daniel von Sturmer who was awarded $60,000 for the Urban Sculpture Prize for his light-based installation Electric Light (facts/figures/Federation Square).

The prize highlights the importance of sculpture in the urban public space and its role in enriching public life.

Von Sturmer, who represented Australia in the 2007 Venice Biennale, creates object-based works using a variety of mediums to explore perceptions of space and time.

Electric Light (facts/figures/federation square) features a robotic light that projects ‘figures’ around a section of Federation Square illuminating elements that are often overlooked such as garden beds, the Aboriginal and Torres Straight Islander flags, bollards and bins. These ‘figures’ are drawings in light, composed of lines, squares, rings and grids that are projected onto the space.

“We are dealing with the general public, so people who are not really necessarily there to experience art,” says von Sturmer. “To insert something into their experience can be quite a difficult thing. It has been gratifying for me seeing passers-by become an audience inadvertently, start to interact with the light, and look at some of these features that are highlighted or played with in a new way.”

Emma Anna was awarded the new $10,000 Public Artwork design concept award, Crafting a City of Literature, for her design concept The Elocwean Rainbow, 2017. Bridie Lunney was awarded the Professional Development Award 2017 for her work Fold, 2017. Muckleford-based sculptor Fayen d’ Evie was the recipient of the $40,000 Rural & Regional Development Award 2017. 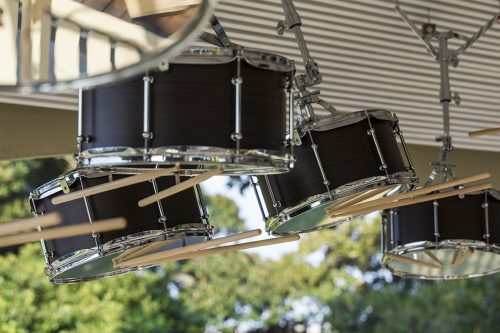 Imagine an open-aired band rotunda filled with 38 upside-down snare drums, all hanging from the ceiling. With drumsticks hovering over the mirrored drum skins, the scene is a literal suspension of disbelief. 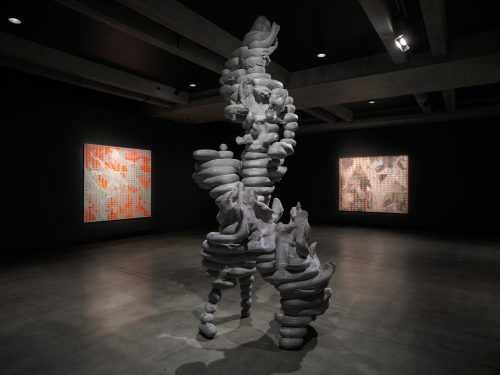 To enter Toby Ziegler’s solo exhibition at Mona, Your Shadow Rising, visitors must draw back a curtain and step into the gallery space.