Please note: due to the current Victorian lockdown, RISING Festival is not able to go ahead. Rescheduled dates will be updated here once available. In the meantime, you can find online content here, including podcasts and playlists, as well as information about public artworks that can still be experienced by those within a 10km radius.

RISING is a resplendent and phoenix-like reincarnation of two former festivals – Melbourne Arts Festival and White Night – and it launches just as Melbourne’s winter chill is setting in.

With programs sprawling across the CBD, the festival has hubs in Chinatown, Midtown and the Arts Precinct, and satellite venues around North Melbourne and Fitzroy. The river – Birrarung, also known as the Yarra – is a key thread linking programs. While many events are ticketed, including two major attractions – an installation by Patricia Piccinini in a disused ballroom above Flinders Street Station, and an intriguing program taking over the Golden Square Carpark in Chinatown – there are a number of free projects in public spaces.

As a whole, RISING’s program is both refreshingly diverse and overwhelmingly local: even those few big names brought in from overseas maintain a strong connection to Australian artists. Jenny Holzer’s I CONJURE, for example, is a massive projection on the façade of the Queen Victoria Women’s Building. It alternates nightly between screening Holzer’s seminal Truisms (a series of 300 statements playing on truth and cliché, such as the famous “Abuse of power comes as no surprise”) and texts selected by Holzer from other notable artists and activists, including Tracey Moffatt and Holzer’s local collaborator Nikki Lam.

Lam’s artwork is also seen in another ambitious projection project, the hearts of the people are measured by the size of the land. Curated by Olivia Koh, this exhibition brings together seven artists from Asia and the Asian diaspora. It splashes moving image works across the Chinatown district: projected onto the roofs and walls of buildings; installed inside the Golden Square carpark; and, in the case of Caroline Garcia’s Imperial Reminiscence, screened inside a cinema.

Koh explains that she has always been particularly interested in Chinatown as an exhibition space. “I read this great quote recently that Chinatown is an ‘ambiguous Asian anywhere’,” she laughs. “It’s always a re-creation of an idea of different cultures, related to Asia – but it’s usually on another colonial settlement, within a broader colonial framework.” The selected works use the visual movement of bodies to explore the movement and transformation of cultures, from Patty Chang’s ritualised washing of a dead whale, to Siying Zhou’s video of her father performing Tai Chi, his machete clad in stubby-holders.

The transformation of culture is a theme that also occupies MOVING OBJECTS, a diverse series of works by First Nations artists responding to items in the Melbourne Museum collection. As curator Kimberley Moulton, a Yorta Yorta woman, points out, these objects – often displayed as static artefacts under glass, or stored in archives – are First People’s ancestral belongings, living connections to Country, family and stories. “Ultimately,” she says, the project seeks out “a sustained way of First Peoples having access to collections, and being supported to create new work in response to this experience.”

MOVING OBJECTS has, Moulton explains, three pillars: regenerate, disrupt, renew. “Often what’s absent in museums is community, and ongoing connection to these objects,” Moulton says. With eight different artists and collectives, including Kaiela Arts Centre in Shepparton, the project takes a multifaceted approach to addressing this lack. The artists of Kaiela Arts Centre have used the display spaces in the Campbell Arcade underground commuter thoroughfare. Titled River Country, this body of work reflects the Murray River of Yorta Yorta Country, and responds to specific collection objects, as well as being conceptually linked to the Birrarung river that pulses just a few metres from the arcade.

Other artists in MOVING OBJECTS have produced poster works that are pasted up across the city; and a performance of songs in language, by Yorta Yorta / Dja Dja Wurrung composer Dr Lou Bennett is a one-night-only event at the Melbourne Museum that invokes the ancestral spirit of collection objects, and calls for their return.

Across the city, polyphonic voices are rising. 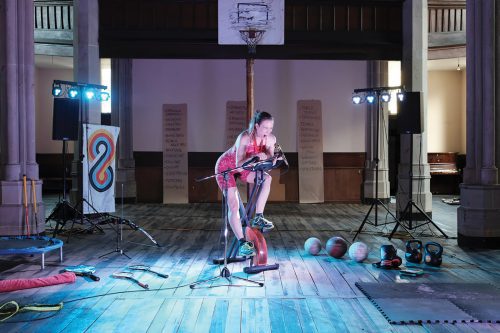 Should we abolish the Olympics?

In a ritualised performance of Olympic events, Pony Express takes a deep dive into what lies behind the gold, silver and bronze.