The Australian Collection at the Queensland Art Gallery used to be neatly bracketed: early colonial art at one end and the 1980s at the other. It was tidy, yes, but only told part of this country’s long story. Now, Australian art curator Kyla McFarlane and QAG director Chris Saines have boldly reconfigured the collection, with the key strategy of integrating the museum’s rich array of Indigenous art.

The ambitious re-hang of the Australian Collection now extends, historically speaking, way back into the ancient past.

It also strides purposefully beyond the 1980s, weaving in contemporary art right up to the present, leading the way with five new commissions – four of them from Indigenous artists. Among these is an enormous wall drawing by Dale Harding, as well as works by Alick Tipoti, Daniel Boyd, Sonja Carmichael and Helen Johnson.

The re-imagining of the collection was embarked upon 18 months ago when the gallery had the opportunity to modify and extend its storage zones, which led to opening up a mezzanine area. About 240 works, taking in the Indigenous collection, will now be on display, with a long “landscape wall” and interesting, porous sightlines that connect the Australian Collection with the international art galleries within the museum. It will cover everything from first contact and colonisation to immigration and the Queensland experience.

“When the galleries reopen [in late September] they will be in spaces that reinstate [architect] Robin Gibson’s original vision for the spaces,” McFarlane says. “One of Chris Saines’s goals for this was to bring back the key sightlines and allow the openness of the building, so the collection can breathe across the space as a whole.”

McFarlane says bringing the traditional Australian art collection into conversation with myriad Indigenous works means that the story the gallery is telling through its art is one that understands “there was art in this country for thousands of years before colonial engagement”.

If, for example, a visitor is focussed on landscape, the narrative now extends across many expressions of Country. Harding’s wall drawing in particular, she says, points toward “this deep, long existing history” because it deals with the incredible galleries of rock art around his home country near Carnarvon Gorge in central Queensland.

“He is looking at those artworks which have been in existence for many thousands of years – and if you are thinking about a timeline of Australian painting, 99 per cent of that is prior to colonial engagement,” she says. Harding’s work also espouses the regional focus that the QAG reconfiguration considers, but it has been cleverly placed so it will be encountered first – well ahead of work dealing with the first European contacts – when visitors enter the large space containing the long wall focussed on landscape.

“Right from the get-go you have this statement that infuses meaning into works you might already be familiar with in the historical collection,” McFarlane says. “There are reminders that this nation is built on fragile ground, if you like, and that there are many histories to be told.” The display, running through works by a diverse range of artists from Conrad Martens and Judy Watson to Gordon Bennett, ends with works from the Western Desert, including Emily Kame Kngwarreye’s Utopia panels, which were commissioned for her survey exhibition at QAG in 1998.

“It is kind of a bookending of really important Indigenous works and histories,” McFarlane says.

“It is also part of a conversation between European Australian art history and an Indigenous history, so hopefully we are complicating histories as well as bringing them to the fore.”

McFarlane says the inclusion of non-Indigenous artist Helen Johnson is important as her work folds into the histories being explored: her double-sided painting commissions come out of QAG’s invitation for her to respond to works from the collection that will be in the display. An artist whose layered work revolves around Australian and colonial histories, she chose two works that are interiors focussing on women: Vida Lahey’s Monday Morning (1912) and A. M. E. Bale’s Leisure Moments (1902). Thomson’s paintings, called Womens’ Work (1902) and Womens’ Work (1912), examine the idea of domestic work, layering through the paintings references to workers’ rights and unions.

Likewise Daniel Boyd examines labour through the lens of his Indigenous-South Sea Island heritage: in the nation’s early colonial days, thousands of islanders were brought to Queensland as slaves (the 1860s) and later as poorly paid contract workers. “These contemporary commissions serve many different purposes and bring contemporary voices into the space but they also reflect back on the collection as a whole,” McFarlane says.

Artists draw on the mist-veiled past to map the shifting, shrinking landscape of China. 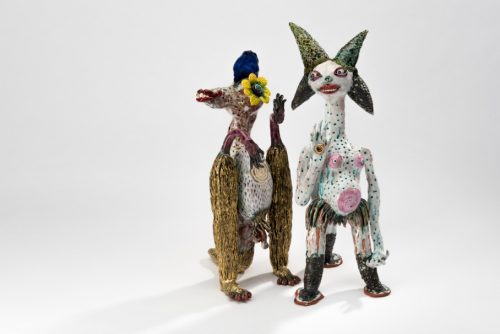 The Uncanny Valley is an alchemical and vibrant exhibition pondering the complexities of existence.