Blood on Silk turns the spotlight on dying

Blood on Silk turns the spotlight on dying

It didn’t end well. This is perhaps a given whenever a dying loved-one enters an intensive care unit. Western Sydney artist Fiona Davies found, some years ago, that when her father’s condition became a heavily medicalised case the hospital placed little emphasis on dying in the palliative sense. All effort was made to prolong life.

“It lasted several months,” says Davies, who has been making art inspired by her experience with her father since the mid-2000s. “Dad was considered at the tipping point, between life and death. That’s the only reason you stay in intensive care.” As a family member of the patient “that’s a long time to be on that level of adrenaline,” she laughs, ruefully.

For her solo show Blood on Silk: Last Seen Davies has used 800 square metres of handmade silk paper to kit-out the Casula Powerhouse Arts Centre turbine hall, transforming the space into five makeshift hospital rooms. Images are projected onto the paper to recreate the bustle of a hospital, although the work is abstract enough to invite multiple interpretations.

Blood on Silk: Last Seen is the inaugural commission for the giant turbine hall. And considering that Western culture tends to shroud death with embalming cosmetics and keep it behind closed doors, Davies hopes her work will spark conversations about end-of-life decisions and dying.

“The surreal nature of that experience reinforces on one level the great intention of hospitals: to make people better. And overlaid with that is the workplace of the hospital and the desolation of the non-spaces of the hospital,” says Davies.

“When you are with someone in intensive care, you quite often spend a lot of time being asked to step outside while the nurses or doctors do something. Sometimes that is in the middle of the night. The corridors are shadowy and there are just the vending machines; nobody else is there. I became very interested in that liminal space,” she explains.

Given that people are often repelled by death and indeed hospitals, it might seem like a difficult subject to tackle. But Davies says, “It’s an easy sell, in lots of ways. While people may have an aversion to talking about death in large groups, on a small group or an individual basis people are very keen to share their experiences. Particularly after I’ve talked about my experiences in the hospital.”

Emotionally, the subject matter is interesting for an artist, says Davies, given that it is not commonly discussed. “If you start to look at the definitions of death, it is really interesting to try and pull that apart,” she explains. “As an artist, I can make works that address contemporary medical practices, and the emotional landscape of those workplaces. I find that particularly rewarding.”

Death is a big topic and Blood on Silk: Last Seen is massive: 13.8 metres high, 13 metres wide and 30 metres deep. For Davies, making the work has been a cathartic experience. And she adds, “To make it that big, I think, has increased the emotional impact.” 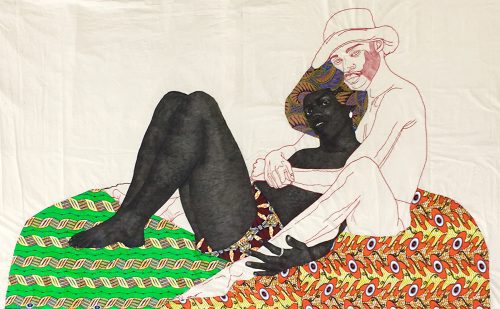