In an 1833 pamphlet English economist William Forster Lloyd posed a quandary: a plot of grazing pasture is held in common by a group of cattle farmers who have free unregulated access. Each grazes as much cattle as they please, and the common is soon spent. Lloyd’s pastoral fable, ‘The Tragedy of the Commons,’ describes how individuals take more than equal share whenever a resource is ungoverned, eschewing responsibility for its preservation. Abuse of the common appears in human consumption, no matter what the scale: the malodorous office kitchen which staff never tidy, overfishing, spurious welfare claims, global consumption of oil and coal. It seems that humanity’s default setting is to take our fill and exhaust the common.

From his Sydney studio, ahead of his first major touring retrospective, artist and forthright social commentator Ben Quilty ponders self-interest.

We must arm ourselves, our children and communities against it, he says, with compassion. “There’s a resurgence of narcissism in Australia. If we legislate based on self-interest, we will always make the wrong decisions for the longevity of humanity, our identity and the planet,” says the artist. “Compassion is fundamental to a healthy democracy.”

Quilty’s practice of compassion underpinned his high-profile support for Bali prisoners Myuran Sukumaran and Andrew Chan, and his humanising portraits of Australian Defence Force personnel made while he was an official war artist. “Ben enables us to reflect critically on citizenship, on our responsibilities to each other,” explains the curator of Quilty’s retrospective, assistant director, artistic programs at the Art Gallery of South Australia, Lisa Slade.

In his painting Flowers for Heba, 2016, a vase of blossoms outshines the grey heating furnace supplied to refugee camps. Heba is a young refugee Quilty met at a Syrian transport point. “Her family lived in a tent in minus 20 degrees,” says Slade. “These vivid blooms painted for Heba are a gesture of hope and empathy.”

Quilty was eight when he first encountered unjustness. A schoolmate was taunted and spat on for being Italian. “I remember the unbelievable sense of injustice,” he recalls. “That feeling never went away.” At 19, Quilty studied Aboriginal history, learning to recognise the apparatus of injustice, the subtle ways that prejudice can mark its wielders and subjects, for years or even generations.

For a recent series, big, unyielding men – stalwarts of the politics antithetical to Quilty’s own – were invited from the local pub into the studio for what was as much an exercise in anti-polarisation as portraiture. “Some could be labelled bigots,” says the artist, “but when you go deeper, you begin to understand the lack of education that leads to disrespect for women, homophobia or racism. I’m intrigued by trying to understand how people get to where they are.” As the buttery layers of oil hit the canvas, the gulf between artist and sitter shrinks.

Humanness, fragile and capricious, is expressed viscerally in Quilty’s portraits. His brushstrokes jostle and smother one another, seeming to suggest a brief and furiously physical painting process, yet also an unhurried communion with the person depicted.

Each smear of oil is biographical, a story or scar. “As a young man I painted skulls,” Quilty remembers, “this fundamental mortal image we confront, or are terrified of confronting. But to put skin on; to put a heart and soul in, then you’re trying to answer the question of mortality, not just pose the question.”

The retrospective exhibition Quilty is a “bruised lilac” space, in which, says Slade, “a syncopated journey through Quilty’s preoccupations unfolds, metred out by his massive, lurid, sculptural Rorschach paintings.” The exhibition resembles memoir, charting the artist’s evolution from a fired-up emerging artist painting his Torana and taking aim at local jingoism, to a public figure commenting on national policy and ethical living.

“He has an enormous capacity to take on dialogue with the world, to have these great, empathetic conversations,” Slade says. “He wants to cut through the elite art world and communicate with a broad public.” A cluster of self-portraits in the exhibition entrance help visitors apprehend a face and voice better known than perhaps any other living Australian artist. “Becoming a more public person was complex,” Quilty explains. “People ask me why I get involved. It’s a privilege to have a voice about things that reach beyond the studio. I take it very seriously.”

While Quilty developed his barefaced approach through the early 2000s, Sydney hip-hop band The Herd were responding to the xenophobic alarmism that would boil over into the Cronulla riots. Quilty was listening.

“Lisa asked me what song sums up my work. I straight away said 77% by the Herd. It was political, striking against Howard’s use of the Tampa incident to win an election. As a visual artist, you often feel isolated. That song made me feel part of a movement pushing back.” To mark opening night at the Art Gallery of South Australia in March 2019, The Herd played, much as Quilty has painted, wielding creativity against prejudice.

Quilty aligns with a reflective period for the artist, as he considers how to pass on what he has learned to his children. “Our world can feel pretty catastrophic. What do I give them to deal with that complex future? They need to learn compassion and optimism, to know that humans can build healthy communities and environments: that we can make happiness.” 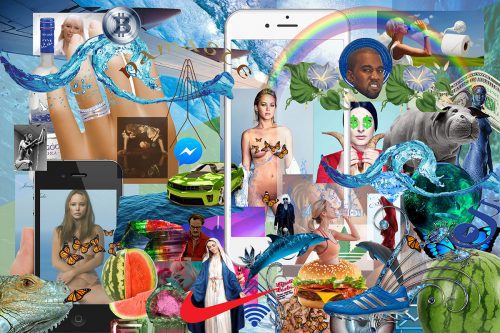 Conflict in My Outlook: When the medium is the message

Our online lives are on steroids at present. Conflict in My Outlook_We Met Online is prescient in this regard. Planned as a physical exhibition, it segued onto the internet with the pandemic and social-distancing.