What a year. Here in Australia we quickly moved from catastrophic bushfires to pandemic fever. While not exactly unprecedented, 2020 has been frightening, intense, deadly, and relentless. Adding to the stress of obsessively watching the Covid-19 infections data rise and fall, my ‘Fires Near Me’ app has recently started bleeping at least once a day. It’s barely spring and the incendiary threat of summer is already looming: 2020 really is the gift that just keeps on giving, and not in a good way.

So it makes sense that in Ben Quilty’s massive painting titled 2020, there is an awful lot going on. Maybe too much. This epic composition, which stretches nearly nine meters across four huge canvases, seems infected with an aggressive, visceral, insidious anxiety. A cadaverously pale figure lies nude on a long white table. It’s not clear if he is actually dead, but his vulnerable figure is exposed in a pose reminiscent of Rembrandt’s 1632 painting, The Anatomy Lesson of Dr Nicolaes Tulp. But instead of physicians with prying eyes and piercing scalpels, the body is surrounded by monstrous forms. Some bring to mind the perpetually screaming teratomas of Francis Bacon, others would be at home in a vision of hell painted by Hieronymus Bosch or in Philip Guston’s cars full of Klansmen; more prosaic scenes of evil. Together they compete for space in a tumultuous writhing mass: there are too many tangling limbs, too many gaping maws full of too many teeth.

This painting seeps an anxiety which is contagious, and looking at it I feel a creeping sense of existential dread. Quilty’s 2020, like the year itself, is overwhelming. It reeks of the acrid tang of fear and the fetid stench of excess.

And this, Quilty says, is precisely the point. “We’re living in a society, community, system that is based on eternal growth; existential crisis is reasonable, it should be normal,” Quilty exclaims. “We’re part of the system that is bringing about the end of the entire civilization that we live in.” If the artist sounds angry, that’s because he is. Quilty is frustrated with our collective reluctance to give up on the myth of perpetual growth, to kick the habit of excess, and acknowledge, as he puts it, that “we live on a ball floating through space” where resources are desperately finite.

In Quilty’s 2020 painting, our addiction to excess is in part represented by the image of a bleary, hung-over looking Santa Claus; patron saint of the capitalist frenzy that is modern-day Christmas, a mass orgy of over consumption of consumer goods, high calorie foods and intoxicating beverages. Quilty has used Mr Claus before as a symbol of white men behaving badly. But in 2020, Santa also seems to stand in for an epidemiological patient zero spreading our current pandemic globally at frightening speed through the everyday magic of jet planes; he is hunkered down in his sleigh next to what looks suspiciously like a giant coronavirus.

But Quilty points out that he began his 2020 painting as a response to the bushfires, before the onset of Covid-19. The fires got terrifyingly close to Quilty’s home and studio in the Southern Highlands of NSW. At one point, burning leaves were falling from the sky and Quilty was on his studio roof putting out spot fires. “It felt like the world was ending,” he says. He describes starting to move his work outside before thinking, “’Where are you going to hide your paintings, as the world falls apart?’ And I just brought them all back in. I thought, ‘What am I worried about? I’m actually the only one, if I survive this catastrophic fire, I’m the only one that can replace them. Let them burn.’”

Quilty was one of the lucky ones, and the fires swept past leaving his home and studio intact. Then, like everyone else, his attention quickly moved from one disaster to the next. Santa’s pom-pom morphed into a coronavirus and the focus of his huge painting expanded to also include pandemic induced anxiety.

In fact anxiety, both focused and inchoate, animates Quilty’s 2020. The entire painting is a vortex of stress swirling around a strangely compelling single beer bottle, to the right of centre. This empty green vessel seems illuminated from within, it draws the eye like a magnetic pole. I tell Quilty I’ve become fixated on this bottle. It feels like the key to the whole painting; the calm centre. And Quilty admits that it’s just that. “When I set out at the beginning of Covid, I thought I need to really calm down,” he says. Overcome with anxiety, he turned to painting still-lifes to still his troubled mind, and this beer bottle was the first.

Quilty did calm down, but his anxiety driven creativity didn’t dissipate. “Over the last few years I started to realise that my work is about my own anxiety. It’s about me feeling really worried about the planet and my grandchildren,” the artist explains. But, he adds, “I felt like I had to step past that.”

And I think he has. Quilty’s 2020 painting is capacious enough to include not only his own anxiety, but our collective fears. And his work is multivalent enough to speak to multiple crises. Which is just as well since both the climate crisis (of which the horrific bushfire season of 2019-2020 was a deadly physical manifestation) and the global pandemic are ongoing, with no end in sight.

Both disasters are massive, and fed, as Quilty points out, by the equally overwhelming machinery of neoliberal capitalism. It’s difficult not to feel impotent in the face of such seemingly unstoppable forces. “It is hard not to be bleak,” Quilty admits. “But as an artist, bleak is a perfectly reasonable response.”

As a national community, we barely had time to begin to process the trauma of the bushfires before the pandemic hit. A collective existential crisis seems not only reasonable, but almost inevitable. Yet in the midst of it all Ben Quilty went ahead and completed the largest painting of his career. “We are at such a tipping point,” the artist explains. “And at the top of the tipping point, I don’t want to be walking away from the creative process. I want to be stepping right into it, into the breach, using the visual language that I have – because that’s all I’ve got – to say how I feel about the world.”

Ben Quilty’s 2020 vision may not be pretty, but it is clear-sighted, relevant and urgent.

This article was first published in September 2020.

Artist and ‘feral trader’ Kate Rich asks: how can artists shake up business as usual? 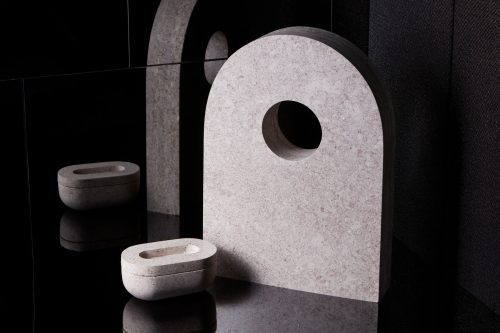 In a time of isolation, designers collaborate on objects for a better collective future.