As Long as the Night is Dark is a fantasy project for curator Simon Pericich. Gathering together artists who ignite his winking macabre side, some friends and some long-time heroes, this exhibition is his ‘Rage guest edit’ of an artistic community fascinated with entropy. It celebrates the dark, tempestuous underbelly of human psychology: “Each artist is investigating the human spirit,” Pericich explains. “We’re doing our dirty laundry together.”

The exhibition includes work by Christian Bishop, Janenne Eaton, Talitha Kennedy, Bernhard Sachs, Adam Boyd, Linsey Gosper, Tony Garifalakis, Dan Price, Jordan Wood and Pericich, too. These artists cover a broad territory, which Pericich demarcates in pathological terms, like melancholy and anxiety. What connects them is not some figurative theme, but a shared introspection. Their works are the result of lifting the veil to confront the true inner self, whether it’s profoundly beautiful or gives you a nosebleed. A sense of doom also pervades: “The world is always ending,” says Pericich. “So we might as well let our hair down and have a bit of fun. It’s that grunge or punk spirit of rebellion.”

On a monumental, 26-metre length of paper constructed from diary entries he made as a young man, Sachs has created a vast charcoal drawing of Dali on his deathbed. Effacing his own youthful writing with historical iconography, Sachs meditates on how identity dissolves with passing time.

Linsey Gosper also considers time’s destructive powers. Depicting crumbling ruins and masonry, her black-and-white photographs hark back to an earlier time of visual trickery, monochrome and alchemy. “She’s a developer in a darkroom, which is like time travel; it’s incredibly romantic.” To produce her large-scale sculptures, Talitha Kennedy spends lonely hours binding leather until it reaches such proportions that it appears animated, twisting and grasping into the gallery.

Sculptor Jordan Wood cuts a witchier figure. The warped ceramic faces she mounts atop pikes are the result of an intuitive, experimental methodology, which she cannot fully control. “She’s often surprised about the outcomes,” says Pericich. “It’s an exorcism in some sense. Something is being drawn out.” The curator often describes artworks as characters, externalisations of the artist’s mind. “There’s a lot of weird energy put into the works. They resonate more like familiars than as things in frames.”

Music is the invisible undercurrent of As Long as the Night Is Dark. While it doesn’t appear explicitly, its transgressiveness and tight-knittedness are of the same stuff. “It’ll be a show of black-wearing people left over from the punk movement, or from the back end of the Melbourne art world,” says Pericich. “Christian Bishop had this wayward youth, playing noise music, getting clubs shut down. Linsey Gosper’s a rocker from way back. Talitha and I are just miserable and listen to witch house.” So often, music subcultures burn brightly and briefly, coalescing around grubby venues, narrow genres and black outfits, before collapsing (remembered longingly for decades). Having experienced firsthand that nothing good lasts long, it’s easy to see how artists who are the remnants of short-lived scenes might form the perspective that everything’s plummeting downhill, disappearing. Even Pericich’s beloved witch house has already carked it.

A 200-page book of photocopies will contextualise the artworks among pictures of “newsy catastrophes and terrifying pop culture” trawled from the online depths by Melbourne performer Travis John. More than a catalogue, the book is a punk zine annex to the exhibition and will have a temperamental notepad bind, designed (born) to disintegrate (die).

Though nursing a compulsion for gloom, Pericich laces this very sobering work with softness. He knows that despite a general taboo on broaching despair or death, it is important for us all to feel darkness, and this can be a force for togetherness. It’s not just catharsis – this exhibition enables an extended encounter. It’s a hand to hold as you descend, or someone to ride with on the ghost train.

Perhaps it’s only in the face of dread and destruction (personal or apocalyptic) that our most human selves are expressed. Approaching an incinerator, with no saviour, Toy Story 3 heroes Woody, Buzz and others simply held hands and felt the same things at the same time. “Something funny happens when you get a bunch of miserable people in the same room. It’s heartfelt, comforting. You wallow around in it. You realise at three o’clock in the morning, I’m not the only person on the planet.” True to form, Pericich sent me a desolate post-rock track to listen to while I wrote this article, knowing it might help me look upon the “black disco ball of sadness” a little longer. 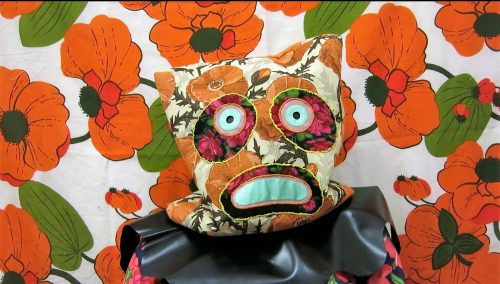 Curiouser and Curiouser takes that classic of absurdity and perceptual play, Alice’s Adventures in Wonderland, as its starting point. 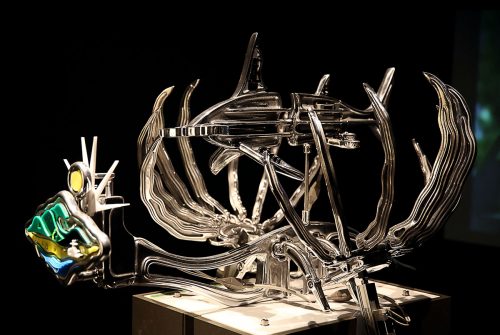