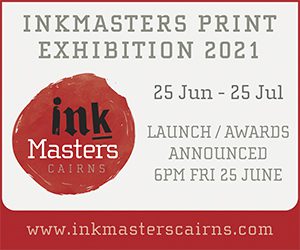 Artistic responses to bushfire carry a certain burden of responsibility. Bushfires represent, after all, some of the most traumatic events in recent Australian history – the ‘Black Summer’ of 2019-2020, from which many communities and landscapes are still recovering, remains particularly raw in the nation’s psyche. To depict or interpret bushfires in profound and affecting ways, art should, surely, engage with cultural and environmental contexts as well as demonstrate aesthetic sensitivity.

Two exhibitions taking place on Yuin Country in Nowra, an area catastrophically affected by the 2019-2020 fires, certainly do this. These shows are deep and nuanced meditations on bushfire and destructive weather, expressing shock and grief as well as fascination and awe at the frightening power and sublimity of fires. Both exhibitions also offer a passionate emphasis on Indigenous knowledge and practice.

Truth in Fire, presented by the Australian Centre for Photography (ACP) in partnership with Shoalhaven Regional Gallery at a pop-up venue in Nowra, is a joint exhibition from filmmaker and photographer Tim Georgeson and the Guringai multimedia artist Amanda Jane Reynolds.

Georgeson has contributed large-format photographs and film installations that feature burnt expanses of land, original sound compositions and interviews with Yuin Elders. Reynolds has provided a possum skin cloak as an installation, Possum Cloak for Currowan, 2020. Reynolds lost her Conjola Park home and studio in the Black Summer fires. Georgeson was overseas at the time, returning to Australia in January to engage with the Yuin Nation’s recovery.

“My first impression, when standing on top of the Nerriga plateau overlooking the South Coast, was of the overwhelming silence of death, vaporised of all life,” says Georgeson. “Growing up in Australia and being in the bush a lot with all the sounds of the flora and fauna, the sudden absence of sounds and life was numbing and frightening.”

This sensitivity to his auditory experience has informed Georgeson’s films, which, he says, “feature the sounds of 100-foot trees snapping like twigs and crashing to the forest floor, wind and animal sounds from the few untouched patches of forest that survived.”

Truth in Fire responds specifically to Black Summer. Another exhibition, WONDER + DREAD: Art in the Land of Weather Extremes, at Shoalhaven Regional Gallery itself, is different. For this group show, curator Danielle Robson has co-ordinated a wide-ranging survey of artistic responses to extreme weather events (not just bushfires, but also drought, floods, cyclones and dust storms) that spans 200 years.

Robson has procured works by artists as familiar as Sidney Nolan, Arthur Boyd, Albert Tucker, Lloyd Rees, Max Dupain and Rosemary Laing, among others. There are also two new commissions: a collaborative installation from Yuin artist Aunty Deidre Martin and Yamatji Wajarri artist Nicole Monks; and the painting We Are Here, 2020, by Manyana-based artist Lara Merrett, which offers an innovative participatory component for visitors.

“It’s important to note that we began planning this exhibition in April 2019, six months before Black Summer,” says Robson. “It is a terrible coincidence that not only did we see the worst bushfires in Australia’s recorded history, but that the Shoalhaven would be the worst-hit region in the country, with more than three-quarters of its terrain destroyed. This had a fundamental impact on the exhibition, and is what led us to commission the new work from Lara Merrett that directly responded to Black Summer. Audiences are invited to cut and remove portions of the painting and take them home. The work speaks to resilience, recovery and healing.”

Resilience, recovery and healing are concepts that also have a strong presence in Truth in Fire. What’s more, both exhibitions balance their focus on destruction, disaster and death by considering the philosophy, symbolism and, particularly in the case of Reynolds, the spirituality of bushfires.

“When lightning strikes, for a brief moment we see that which has been veiled in darkness,” says Reynolds. “[This is] how I hope the Black Summer fires have awakened the consciousness of modern Australia, illuminated the problems and gifted resilience – and that we see real change. Country teaches us if we listen deeply – we as a modern society can listen or not.”

Georgeson’s short films Requiem for a Forest, Pyrogenesis and Anthropomorphis, all 2020, while movingly elegiac, also consider the ‘lessons’ of the fires. As well as the landscapes, sound collages and interviews, the films show ritual and ceremony, including traditional Gulaga dancing and Reynolds performing with the possum skin cloak. “We move from death to the renaissance of new life and rebirth that the life cycle always brings,” says Georgeson. “Inside these apocalyptic landscapes and transformational ceremonies, we engage with the First Nations connection to Country.”

Indeed if both of these exhibitions could be distilled down to one message, it is probably that the best framework for understanding, responding to and preventing the devastation of bushfires comes from Indigenous wisdom. Although WONDER + DREAD features a stunning array of art in a Western tradition that seeks to capture and make sense of the spectacular brutality of the Australian climate, Robson is keen to emphasise that the spirit of ancient knowledge hovers decisively over her show too, and that certain things may be revelatory for visitors.

“A key theme that emerged [in WONDER + DREAD] is the tension between the colonial perspective of the Australian landscape as harsh, inhospitable and uninhabitable, and the approach to landscape of First Nations people, who practised traditional land management and thrived for tens of thousands of years,” says Robson.

“I’m not sure how many non-Indigenous people are aware that our First Nations people had incredibly sophisticated seasonal calendars that were unique to different regions. Some regions have six annual seasons, others three. When you stop and really think about it, the ill-fitting four European seasons that were indiscriminately transplanted here at the time of colonisation are ripe for review.”