Debra Porch’s posthumous exhibition, Art should make life more interesting than art, reminded me of a piece of graffiti I saw on the back of a toilet stall door a few years ago. It’s an oldie but a goodie; if by goodie you mean startling, chilling and horribly accurate. It goes like this: “Men are afraid women will laugh at them. Women are afraid men will kill them.”

Looking around, it did seem like Porch (1954–2017) had used laughter in her takedown of masculine pride and posturing. The gallery was fairly bristling with phalluses. Abstract male members, both large and small, nestled in nooks in the stairwell, hung from walls in clusters, stood in loose regimental ranks in vitrines: and every single one of them was fluffy, flaccid and faintly ridiculous.

In Untitled from Peek, 2002, an oversized knitted phallus with an enormous knob poked out from a nest of pale lemon-tinted fake hair, roughly the size and shape of a Pomeranian. In My Eiffel’s, 2004–2008, multiple souvenir statuettes of the Eiffel Tower, that quintessential symbol of man’s upward thrusting ambitions, were all rendered cosy and floppy with little knitted hats. And in Snuggle/Tickle, 2007, more than a dozen woolly phallic forms protruded from the gallery wall, but not one of them managed to stand to attention.

Using nothing but knitting – itself a kind of magic, as string is converted into three-dimensional objects using just two pointed sticks – Porch deftly rendered a whole bevy of phalluses impotent, and at the same time pointed to the generative power of traditional women’s skills. In this fashion, Porch’s work conjured up the shadowy spells of fairy tales.

In the world of fairy tales, straw can be spun into gold and the prick of a spindle can send you to sleep for a hundred years.

Porch’s Archive of Ordinary Space, 2017, particularly resembled a fairy tale tableau. In this wall-mounted installation, a stuffed parakeet watched over a line of needles so long and so sharp they could have been reclassified as weapons. In Porch’s twoand three-dimensional stories, women don’t wait around to either become victims or be rescued; they possess a fierce power, barely contained.

With an assured sleight of hand, Porch subverted stereotypical gender roles: the masculine is soft and the feminine is sharp – sharp as in clever and witty, to be sure, but also lethal. In her work, women may indeed laugh at the foibles of men, but they refuse to be afraid. 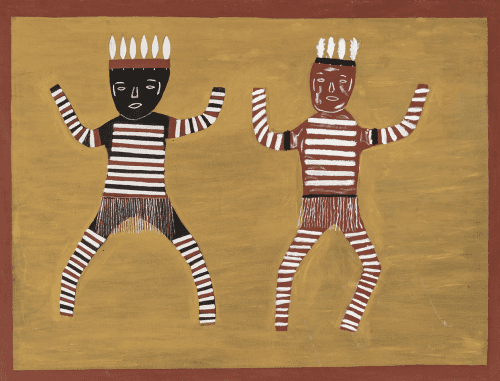