Butcher Joe Nangan was a Nyikina and Walmajarri man, born circa 1900 in Yawuru Country, near Broome in Western Australia. A prolific and eclectic artist, he was awarded an OAM for services to the arts in 1987, two years before he died. In From the Bukarikara: The Lore of the Southwest Kimberly Through the Art of Butcher Joe Nangan, Kim Akerman records the stories behind the works, as told to him by Nangan himself. In the extract below the author outlines the artist’s inspirations.

Nangan spent his life acquiring the ritual knowledge not only of the country of his own Nyikina and Walmajarri forebears but also of the lands of his neighbours. He lived and worked with Karajarri, Yawuru, Jukun, Nyul Nyul, Bardi and other peoples of the Dampierland peninsula and the hinterland of the 80-Mile Beach to the south of Broome, all the time absorbing the lores of their respective cosmologies. It was in the cultural milieu of these groups that Nangan found his creative inspiration.

Inspirational themes came from a number of sources. Primarily, Nangan illustrated the legends of the Bukarikara, that formative period when beings with the ability to transform from human to animal or other forms walked the earth. These beings not only sculpted the landscape but also, through interaction with each other, brought forth the codes of conduct by which humans were to live. Guidelines for interpersonal relations were laid down, as were laws relating to ceremonial behaviour. At this time customs relating to material culture and hunting and gathering cycles, as well as to the treatment of foods, were also instituted.

The Bukarikara of Nangan’s country and ken, is, for the knowledgeable person, embedded in the natural features of the interior: the rocks, hills, plants, birds and animals and, most importantly, waters – the whirlpools and tides and reefs of the coast and the rivers, soaks and permanent springs. These features and the occupants of the country are vivid testimonials to the power and endurance of the Bukarikara. The legends are not children’s stories or idle tales; they constitute a trove of parables and rationales for life and a charter for human interactions that have come down over millennia.

It is of interest to note that Ada Peggs, who resided in Broome between 1898 and 1901, made the earliest records of legends from the southwest Kimberley, in 1901, including four in her paper ‘Notes on the Aborigines of Roebuck Bay, Western Australia’ (Peggs 1903). She had been told the legends by a small boy, Willie Jones, while travelling between Broome and Singapore. Jones had lived at Derby from the age of four. His only companions had been Aboriginal children, and according to Peggs he could speak the local language well. Nangan illustrated versions of all four of Jones’s stories at different stages in his career.

Another well of inspiration from which Nangan drank was a range of historical events believed to have involved elements of magic or the supernatural and the spirit worlds in the lives of known mortals. These stories, often set in the early half of the twentieth century and relating to people living at pastoral stations, missions and town camps, provide insights into the way in which Nangan and his people viewed their world. Rarely was anything casual or unstructured. The rustle of the wind through the grasses, the call of a bird or the sighting of a shy bush animal, the movement of stars and planets: all these esoteric signs had meaning to those who had been taught to read them. Nangan, like many other jalnganguru, was acutely aware of such phenomena, and, as Petri noted, he did indeed seem to live in the Bukarikara.

Rai were also a favourite topic. Nangan was believed by the Aboriginal community to interact with these somewhat mischievous yet helpful little beings regularly throughout his life. Rai were perceived by many of his peers to be the source of his vast store of spiritual knowledge and power.

From his childhood experiences in the bush camps, Nangan drew images of everyday activities practised before the coming of the Europeans (kartiya). Conflict, economic exchanges and domestic relationships were subjects for his pencil. The creatures of the bush, particularly smaller reptiles, birds and mammals, as well as insects, were also important subjects. Many of these apparently insignificant creatures were, in fact, manifestations of the all-powerful Rainbow Serpent, or were spirit familiars of other mythic beings. Images of flowers, grasses and foliage reflected also their importance in the Bukarikara. Often, a picture consists purely of small sketches of plants, birds, mice, lizards, caterpillars, millipedes and the bristle worms common in the tide pools of the northwest coast. Such images reflect natural markings seen on rocks, which are perceived to be traces of Bukarikara animals that left their mystical designs forever fixed in stone. Today, men still carve such designs on wooden and pearl shell artefacts of both sacred and secular import.

From the Bukarikara: The Lore of the Southwest Kimberly Through the Art of Butcher Joe Nangan by Kim Akerman is published by UWA Publishing. 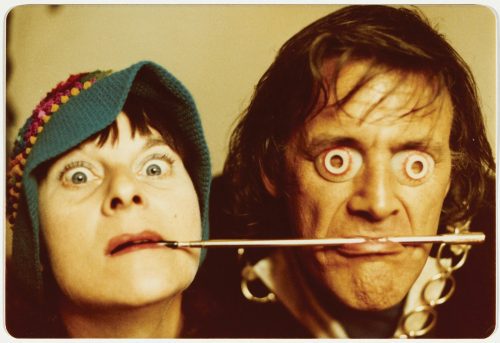 Overlooked during her time, the late Pat Larter was a master of wit, theatrics and provocation. 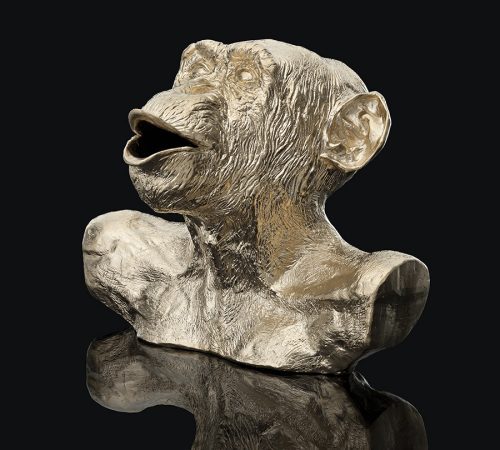 For the artist Lisa Roet, looking at apes is like looking in the mirror. For her the reflection we see when we gaze at our simian cousins is both murky and revealing; it tells us something about our inner selves and our broader culture.