Veiled Paradise, an exhibition at QUT Art Museum which surveys three decades in the extraordinary career of Fiona Foley, closes 26 September. If you can’t get to Brisbane to see the show—or if you’ve been but still want to know more— the biography Fiona Foley Provocateur: An Art Life offers an in-depth look at what drives the Badtjala artist. Written by Louise Martin-Chew, this biography is also record of a friendship between artist and author. Filled with intimate details and told in a conversational tone, Fiona Foley Provocateur catalogues not only the trajectory of Foley’s life and art practice, but also the historical disenfranchisement and ongoing survival of Aboriginal culture. In the extract below, Foley discusses her educational experiences, from always being an outsider and the “new kid” as a child, to attending art school in Sydney.

Across the sea from K’gari [Fraser Island], Fiona spent her earliest years in Hervey Bay. As a five-year-old she remembers “sitting on the beach at Urangan looking across to K’gari and asking my grandmother why there weren’t any giviids [Aboriginal people] living there. She didn’t have a satisfactory answer and got a little bit gruff with me.”

At home Fiona says they spoke “Badtjala in the family home with my extended family”, (1) learning the traditional boundaries and geographical landmarks of Badtjala country—K’gari, Double Island Point, Tin Can Bay, Bauple Mountain and north to a point at the mouth of Burrum Heads. She pored over The Legends of Moonie Jarl, its stories handed to her great-uncle Wilf Reeves and great-aunt Olga Miller by their father Fred Wondunna, who imparted his knowledge and “correct  behaviour”. (2) Reeves tells us in the introductory pages that, “These are the stories that belong to all Australian children, for their own birds and animals are the subjects of legends which have been handed down since the First Time”. His words explore the origins and importance of all living things, and the meaning attached to the natural rhythms of Badtjala places. They describe spirits good and bad, a Jun Jaree for everyone, to keep them from harm. The Jun Jaree is like “the fairies and pixies … a good spirit which can belong to you alone”. (3)

The book also shares behaviour protocols and knowledge of Badtjala places. “I knew it was rare—most Aboriginal people did not have stories published. I felt lucky, culturally enriched really, to have that object in our home and our stories of K’gari recorded.” (4) Shirley Foley’s 1996 dictionary of the Badtjala language was also an important precedent, that “allowed us to conceive of writing our own history”. (5) In 1984, when Fiona was at art school, she found an answer of sorts to her five-year-old self, in C. D. Rowley’s The Destruction of Aboriginal Society (1970) in which she found accounts of the “intentional” violence directed at Queensland Aboriginal populations for more than sixty years. The tragedy was massive, with many deaths, and the decimation of Badtjala populations.

When Fiona began her schooling, she found an excluding ethos:

My earliest interactions with “outsiders” were when I attended the local primary school at Urangan, Hervey Bay where I intuitively sensed there was a point of difference.

I found that difference coming from other school children and my classroom teacher, who I was fearful of. They were not  giviid like me. I was made to feel different from a very early age in an environment that was not my home. As I found out, being from the Aboriginal race meant also being scrutinised by others on a daily basis. As Frantz Fanon writes, “I was responsible not only for my body but also for my race and my ancestors”. (6) This scrutiny seemed to penetrate all aspects of life. It was a much larger societal embrace that I could not articulate at the time. (7)

Always being the “new kid” can’t have made it easier, as her family’s many moves saw Fiona attend at least six primary schools. By the time she reached high school, her family were in Sydney. Living in the northern suburb of Hornsby, she was sent off to the local Asquith Girl’s High, a public school with about one thousand students. Fiona said, “I was pretty middle of the row. My mother used to say I was a plodder; I would get there in the end. At some point I also realised that I was very determined. My mother insisted that we all did our Higher School Certificate. I passed psychology and I got an okay mark for art (for the practical side).” She gained entry to an art certificate course at East Sydney Technical College (now the National Art School). Her first year involved three hours of travel every day, from Hornsby to Randwick and back.

I was still living with Mum and Dad. In the first year, I got three Cs and a B, and my mother said to me, “If you don’t pick up your grades, you are going to be a primary school teacher”. I thought, “No way José!” So I picked up my grades and, in second year, at East Sydney Tech, the course was run out of the old jail in Darlinghurst, up near Oxford Street. The trip was a bit less in distance. And it was a great environment: I had two really good lecturers, Bruce McCalmont in sculpture and Geoff de Groen in drawing. I majored in printmaking and sculpture and then, when I finished my two-year certificate, I thought, “I’ll do my BA”. I applied for two schools and I got into both. I kicked off at Sydney College of the Arts. The first year was the foundation year and years two and three we could major. You only had to do one major, but I like to push the limits. I did a double major, once again, printmaking and sculpture. I thought, “I won’t go into painting, because there are a lot of Aboriginal painters”. I wanted to be a bit different.

Aboriginal protocol gives rights to particular stories to families, groups and lineages, a lesson Fiona internalised at art school. In 1983— during her second-year at East Sydney Technical College—“I was making an etching, and copied a drawing by another Aboriginal artist, a bark painter. I remember birds and water lilies. As I peeled back the paper of the etching plate I felt this falsehood.”

She was aware of a difficulty: she wanted to represent her Aboriginal heritage visually but was without symbols. Given the disruption to Badtjala culture, traditional skills and iconography had been lost. Her parents told her: “You have to be true to your culture.” And she had a  realisation: “I started to understand that I have remnants of a traditional culture—some of which is in museum collections. That was my traditional culture and I could draw upon it. It felt like a huge jigsaw puzzle.” And she found herself with company on this journey: “At that time, artists on the east coast were creating a new visual language. I became part of that.”

Shirley discovered three shell necklaces from K’gari, held in the South Australian Museum. When Fiona visited the museum, she noted their beautiful shapes, one a moon crescent, the second squarish and the third elliptical. She interpreted them as Pearl Shell Necklaces (2000), a triptych on canvas in which the shiny opacity of the pearl shell is rendered over a golden background, contemporary paintings of exquisite traditional objects from her Badtjala heritage. “At a deeper level I understood I had to talk about my history. It was  a lesson from my mother about cultural authenticity, being true to your culture, not feeling you have to copy another Aboriginal culture to represent yourself.” 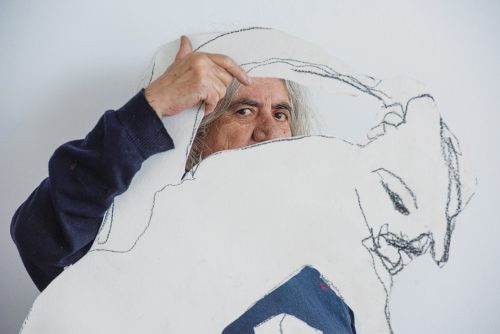 “As an Armenian, the concept of exile and genocide is not unfamiliar.” 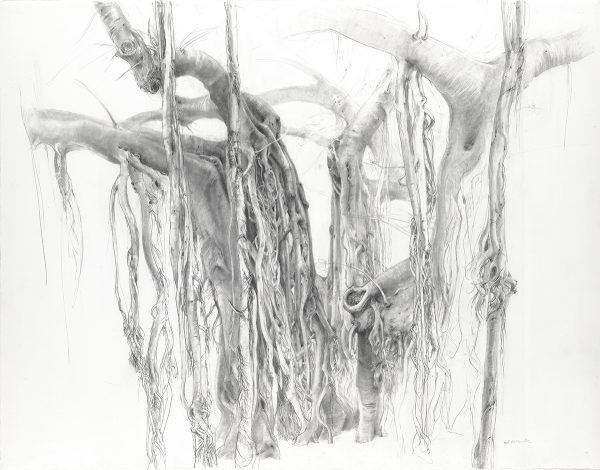 Melbourne-based curator and art historian Elizabeth Cross is less known for her own work as an artist, but this identification is shifting with the opening of her exhibition, Arborescent, at the Australian National University’s Drill Hall Gallery.