She saw what could still be done; that was her great achievement. She understood WB Yeats’s phrase ‘the delighted eye’ and she gave it an intense and active meaning. There is a bravery and sweep in her gestures as a painter, and a sort of fearlessness. She was not afraid, for example, to repeat herself, to make the same type of marks and see then what surprise the moment of making would bring. She was not afraid either to change what she was doing, to find a whole new set of tones and textures. And she was not afraid of beauty, of finding a set of gorgeous colours and seeing where they would take her. Neither had she any fear of working with a more muted palette, using the colour black, for example, with a magisterial confidence.

Paul Klee spoke of a drawing as ‘a line going for a walk’. For Kngwarreye, a painting was a way of taking a whole vision, a vast store of knowledge – historical, visual, spiritual – for a walk.

The paintings are part of their context, whether we like it or not. Kngwarreye, an Indigenous Australian artist from the Utopia community in the Northern Territory, was born in 1910 and died in 1996. She painted on canvas for less than a decade at the end of her life. There are others who know about the tradition she came from and what her paintings meant to her own community, how they relate to the time when they were done and the timelessness that must also have mattered to her.

I look at them with an Irish eye; the context fades, overcome by the weight and density of the dream that is worked on and invoked in these paintings.

There is somewhere at the root of her talent a sort of wildness, an immediacy, a pressing need to get the mark made, but also at the centre of her imaginative realm is the urge to create balance and work with system and structure. Kngwarreye may have been a great colourist, but her genius lay in how she saw the limits of the canvas, how she imagined the architecture and arrangement that might hit the viewer’s nervous system. She was a great cerebral painter as much as she was someone who worked from instinct. She was unusual among painters in letting both impulse and restraint do nourishing and fruitful battle with each other as she set out to work.

While she used her mind when she painted, the result is neither cold nor manufactured. Rather, Kngwarreye created the illusion of what was organic, working with process and growth and bloom; sometimes the paintings suggest an overwhelming kind of warmth, an elated painterly sensibility at play.

There is an element of magic, of pure alchemy, in what she did. She trusted the paint, her marks are glistening and fresh, the dots and tracks and lines and brushstrokes fully alive, also patterned, configured, controlled.

It is perhaps too easy to say that Kngwarreye was all brightness and adventurous line. Goethe’s definition of colour as ‘troubled light’ might help us to see the range of what she did more clearly. Some of the paintings are stark statements. It was as though the world’s plenitude pleased her, but Kngwarreye was alert also to what is hidden within light, to what is strange and beyond our understanding. She was the painter of what lies underneath, elements that must be registered subtly and mysteriously, of the in-between things giving way to the full look of how the world was.

Many of her paintings come in the guise of abstract statements, using swirl and heroic gesture, evidence of the captured moment, inspired versions of what the poet Gerard Manley Hopkins called ‘inscape’. Her colour and lines are filled with immediacy and energy. This, however, only partly explains the power of her work. There are other ways that her legacy as a painter can be read.

It might make more sense, or help us to see her work better, if we imagine her working as a cartographer of a landscape fully known – physically, viscerally known – and inhabited in ways that are spiritual and pure, as well as exact and precise.

If we assert that for her, as for many artists, the shapes in nature had a sanctity, a hidden power, a deep suggestiveness, then we might learn how to look properly at these paintings. It was her task to summon up the underlying power of things as a seer might, as a visionary could. But what she saw was not ethereal or other-worldly or vague. The shapes she worked with were the shapes that she witnessed rather than dreamed about. While the span of her art is grand, its details are focused; the colours and contours in her work coming from knowledge, from a fierce watchfulness, from close study.

The paintings resist interpretation. Sometimes there seems to be a pathway or a pattern, a set of marks that connect, that suggest something that is dynamic and not random, that suggest growth, competing and yielding forces in nature. Sometimes also the colour is stunning; the paintings have an impact that stops you thinking or trying to understand or interpret and forces you instead to look, just look.

In their stark force, their compelling immediacy and their complex emotional power, the paintings of Kngwarreye propose a way of being in the world. In this, they are not made to delight us as much as to transform us. They stop us feeling that we can control nature, understand light and pattern or come to easy terms with the energy all around us.

In Kngwarreye’s country, as in mine, people, often outsiders newly arrived, made maps and began to put up fences; they bought and sold land as ways of limiting or taming the land’s very complexity. In defiance of this, Kngwarreye’s paintings insist on the act of seeing and the act of knowing and the act of possession as grand imaginative acts, alert to the notion that we are, as Robert Lowell wrote, merely ‘poor passing facts’. We have no rights; we cast shadow rather than light. It is the land around us that lives in history; we merely fade in time.

Thus, the paintings work with the idea of an abiding spirit in place, a spirit that is confined because the pictorial space itself is confined. In the intricacies of some of her patterns, Kngwarreye suggests the sheer breadth of the world that she depicted, but the paintings themselves have a melancholy edge as they acknowledge that our ability to live fully on the earth is finite. In her work she invoked abundance and, through an elaborate set of marks and lines and patterns, she distilled it, pushing it towards essence. If we can look with enough care and innocence, this is as much as we will need to know about the places that have made us, that our eye has taken in.

Edward Said has written on ‘late style’, about what happens to a composer or a writer or a painter at the very end, a time when it all has been said and a new abandon or a stark simplicity or an intense freedom can emerge. This happens with startling force in the work of, say, WB Yeats and Beethoven. Kngwarreye, as she came to the end of life, worked with the full freedom of a discoverer, of someone for whom this way of seeing and working was new and fresh. The style was infused with unabashed excitement. But there is also the sense in her work of someone who has no need to take easy routes, to confine her inspiration or narrow it. She opened her canvas up to beauty with a wonderful recklessness. While she could calculate, she could also forget all calculation to let the image soar. Her art has all the buzz and tumult of an artist starting out and all the sombre, late knowledge that she must, since time is short, risk everything to get it right. 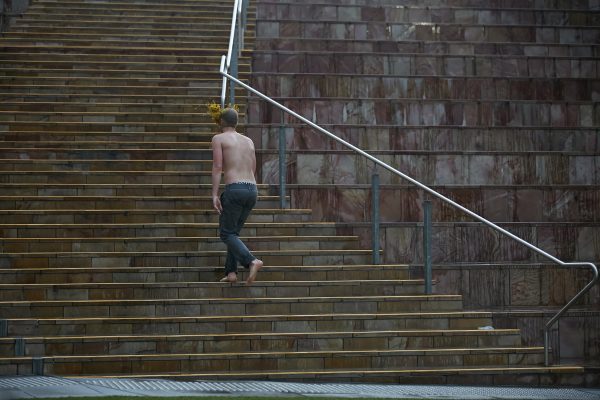 Invasion is Michael Cook’s most ambitious photographic series to date. Louise Martin-Chew talked to Cook about his need to extend himself, to ask questions, and show people the many colours between black and white.