That unwieldy and shapeshifting beast, the artist-run initiative, comes in myriad forms and structures, all lumped into one handy pen for the ease of grant panels. Arising out of perceived necessity, artists become curators, producers, designers, administrators, cleaners, caterers, bartenders, bookkeepers, install crew and tech support for the projects they run. Often two or three people rotate through all of these roles on a voluntary basis.

An Act of Showing invited 22 artist-run initiatives (ARIs) and Aboriginal art centres to consider what it is they do, framed as a “material conversation” around place, geography and “radical localism”. As a survey exhibition, it also functions as a snapshot of the ARI landscape across Australia and South-East Asia in 2017. The show draws on extensive research by Maria Miranda, whose ongoing project An ARI Experience has seen her travel to just about every artist-run initiative in Australia, collecting oral histories and tracking spaces as they morph.

The exhibition is held at Testing Grounds, which seems appropriate: while it’s not an ARI but a city-funded institution, Testing Grounds is exactly the kind of deliberately ad hoc, flexible, inside-outside, make-do space that exemplifies the artist-run initiative.

Surprisingly, given the ambitious number of participants, An Act of Showing is nearly all contained within one modest gallery space.While there’s something interesting about condensing 22 geographic locations into a single small room, the exhibition does feel claustrophobic at times.

The contributions themselves are varied in form and scope. Laundry Art Space’s video shows three directors earnestly engaging in the mundane tasks of running a gallery: changing light bulbs and taping down electrical cords in a humorously staged performance. Yogyakarta-based Ruang MES 56 documents their moves between buildings through text and photography. FELTspace’s Luke Wilcox has superimposed a line drawing of the Adelaide gallery’s facade, mirrored, onto the outside of the Testing Grounds gallery, the two spaces hinged at the door.

While confined to minimal square metreage, many of the works consciously reach outside the Testing Grounds space. One Place After Another produced stacks of business cards printed with a QR code, which links to artist commissions on an online platform. Many others ask viewers to visit their websites for more context, or in order to experience the work proper.

An interactive work by C3 Contemporary Art Space (Melbourne) forges a direct link to the ARI it represents. A red button and unlit LED light on the wall are apparently twinned in the foyer of C3. I am instructed to push the button, which will briefly activate the red light in C3. If anyone sees this, they may communicate with me by pushing their button, lighting up my LED in turn. For two visitors separated by suburbs, the content of a communication via flashing light remains ambiguous, akin to shouting into the void. When I press the button, there’s no answering light.

Trocadero’s #whoisspitman, by Georgia Banks, is a performance and text piece responding to a mysterious person who spits regularly on the gallery door. Funny and insightful, it touches lightly on the geographic location (gobs of spit are commonplace in multicultural Footscray), the possibility of a local with a grudge (art galleries as the first sign of gentrification), and the loose organisational structure of the ARI.

In many cases, though, the responses fall short of furthering a conversation about place, and can feel somewhat reductive.

Unfamiliar with several of the ARIs, I would have appreciated the additional context of geography – but only those locations outside Australia are systematically listed in the room sheet. This feels like a strange omission: is it possible to engage in a discussion of place without knowing whether an ARI is located in regional NSW, the Melbourne CBD, suburban Brisbane, Alice Springs or Tasmania? Without an understanding of the political alignments, socio-economic realities or identities of its community?

Rather than a discussion, An Act of Showing reads more like 22 separate statements, prepared in 22 isolated geo-political-artistic bubbles. The stage is set for a conversation to occur, but I’m not convinced that it’s happened yet: perhaps a standalone exhibition isn’t enough to convey the richness of dialogue that I think the curators intended. That said, this exhibition provides some valuable, humorous and intriguing responses to the questions posed; and it’s wonderful to see so many diverse spaces represented. I hope this is the beginning of a deep, robust conversation, drawing together the disparate pockets of practice that characterise the Australian art world.

An Act of Showing, by Anabelle LaCroix and Maria Miranda, was at Testing Grounds, Melbourne from 17 May to 27 May, 2017. 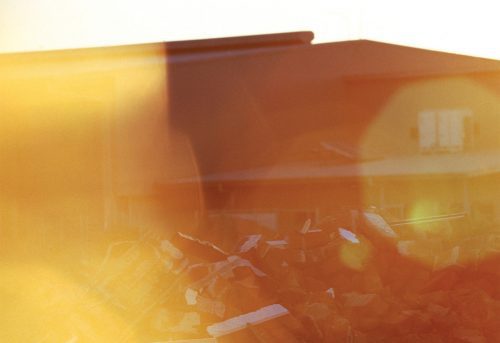 Jacob Raupach has directed his gaze at the rail corridor between two places he has lived – Wagga Wagga and Albury/Wodonga – both en route between Melbourne and Sydney. 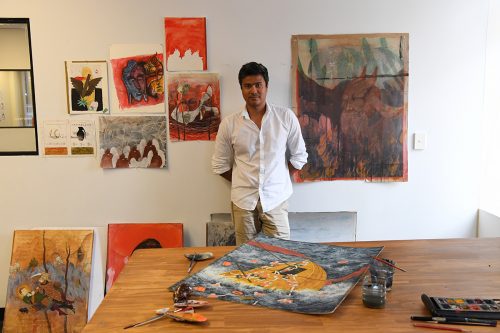 If poets are the ‘unacknowledged legislators of the world,’ Khadim Ali’s lyrical paintings are odes to the downtrodden.