“It’s a really excruciating video,” says curator Stella Rosa McDonald about Roslyn Helper’s new work in the group exhibition After Technology. Across three screens, Helper and a woman she dated restage their relationship by reading out their texts and Tinder messages to each other.

McDonald, who co-curated After Technology with Eleanor Zeichner, says Helper’s video 36,000 Words Under a Gemini Moon, 2019, explores the way we can now “revisit ourselves in time” through our message archives. “That really does shape our intimacy and the way we remember ourselves,” she says.

What happens after technologies emerge, after the devices have been built, and we’ve altered the conditions we live in? This question connects the diverse works in After Technology.  “We really wanted to look at the ethical and cultural dimensions of technology,” McDonald explains. It’s a provocative line to take, especially at a gallery based inside the University of Technology in Sydney.

Key older works include Patricia Piccinini’s Sacrifice, 1996, and Julie Rrap’s iconicOverstepping, 2001. “We don’t return to works enough,” says McDonald. “They don’t finish being important or meaningful, if they’re good.” There is also a video work by the collective VNS Matrix that deals explicitly with obsolescence, re-presenting two of their cyber-feminist video games that can no longer be played.

Some of the artists, like Helper and Brian Fuata, are interested in the way we form relationships. Others consider how we have physically changed, such as Yhonnie Scarce who, in her installation Strontium-90 (Fallout Babies), 2016, confronts the legacy of nuclear testing on Indigenous people.

Akil Ahamat’s video installation Muscular Dreams, 2016, leaps sideways from a Nike Air Jordan sneaker to an impossibly stretched arm, waving on a screen, to an audio narration of Michael Jordan’s final scene in the basketball movie Space Jam. The hyper-textuality of the work suggests that what has really changed is the way Ahamat thinks and interprets the world.

Other works move beyond the body to consider the networks we inhabit. Tega Brain’s installation Being Radiotropic, 2016, includes three wi-fi networks that are controlled by the cycle of the moon, the heat of a candle, and a peace lily. “She’s encouraging our awareness of the environmental systems around us, whether they be natural or digital,” McDonald says.

Grant Stevens also considers nature in The Mountain, 2018, a computer-generated vision of a mountain affected by algorithmically determined weather patterns.

McDonald describes it as an impossible object, a kind of digital sublime.

But perhaps it is (re)scribing language, 2018, by Robert Andrews that offers the most powerful critique. Andrews, an artist with Yawuru heritage, has installed a vast, wall-mounted machine blending contemporary and ancient technology. As it moves, the machine drags materials like burnt branches, ochre and oxide across the wall. Andrews has programmed these movements by inputting a Yawuru word, buru. “Buru variously means country, ground, soil, time and space. What he’s really saying is that the English language can’t contain the meaning of his own language, which is embodied in landscape and changed by conditions in nature,” McDonald says. “Using natural elements, he has retranslated the word back to country.” 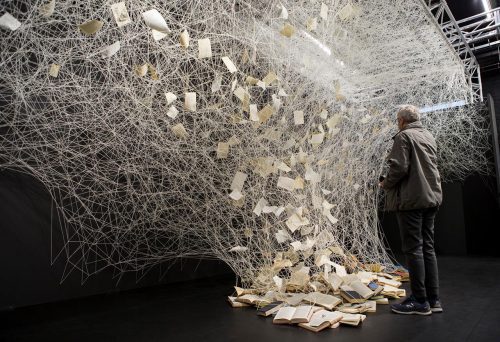