A lumen is a unit of measurement used to describe the relative brightness of light, and Lumen at White Rabbit Gallery does indeed feature a wide range of light-emitting artworks by Chinese artists: photographs on lightboxes, video projections, and immersive installations delineated by green laser beams or strings of coloured LEDs. Although, as curator David Williams points out, Lumen not only showcases light as a medium, it also focuses on the conceptual potential of illumination.

Williams highlights Zhang Peili’s 2012 Portraits as a major work in Lumen that uses light as both a material and an idea. Peili’s video installation (which was acquired for White Rabbit in 2020 and has not been on show before) is massive and intense. Projected at 5 x 3 metres in a darkened space, it subjects both the audience and the 14 people filmed to excruciatingly bright white light. Watching the video, Williams says, makes for uncomfortable viewing as everyone involved—both on and off screen—is forced to squint. “We react in the same way as the person being videoed,” Williams explains. “The artist is saying that the people aren’t necessarily the real message behind the work.” 2012 Portraits can be read as a physical manifestation of the psychological pain involved in facing the harsh glare of reality.

Alongside this piece, Williams has selected more than 30 diverse works for Lumen from the White Rabbit collection. Some, like Peili’s video, shine metaphorical light into hidden recesses, while others invite luminous play. But viewed as a whole, Williams says he hopes the exhibition will be an “opportunity to shed light on, or encourage people to take a closer look at, things that might be taken for granted otherwise.” 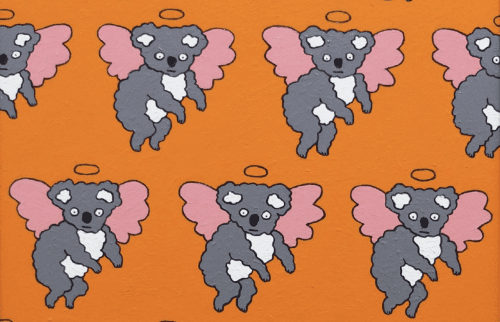 From cute to uncanny, absurd to naughty, Matthew Harris talks about camp aesthetics, growing up in a country town, and his latest show The Simple Life at Galerie pompom.