Wood smoke floats gently over the harbour from a far corner of Cockatoo Island. Under an open-sided shelter, fire is contained in steel drums. Perched above them on a metal lattice are ceramic cups of varying size, their sides licked brown and black by the flames. Most are filled with milky water, slowly evaporating to reveal mounds of sea salt. At a nearby table, visitors take balls of clay from a bucket and pinch them into small cups, rough with finger marks. Dry vessels are salt-fired in an adjacent kiln, using the salt harvested on-site.

This slow, shared process is both extractive – of resources and of labour – and generative. A temporary community of makers is assembled, and they contribute to a larger project. There is a closed loop whereby local salt is harvested and used to glaze vessels, which are in turn used to gather more salt.

This collaborative, functioning studio is part of Drowned River Valley by Yasmin Smith, commissioned for the 21st Biennale of Sydney. Smith and her assistants work here five days a week for the first month of the exhibition, gathering and processing materials to investigate ecosystems of nature and labour.

An evolving installation unfolds at the highest point of the island in the old timber drying store, a tall, open, slatted wooden structure.

A series of steel lattices is laid out on the spaced timber floor. Fired vessels are placed intermittently along these grids, echoing the salt farm below. There are neat teacups, tiny thimbles and thick-lipped bowls. Their glazes range in tone from warm, fleshy peaches to stony greys flecked with brown or green, notes of iron in the salt glaze.

This is not the first time Smith has worked on a complex, site-specific project, collecting and analysing data in a process that borders on the scientific. Smith, born in 1984 in Sydney, where she is based when not working on location, has developed a ceramic and installation practice that crosses over into science, geology and archaeology. After graduating from Sydney College of the Arts in 2010, she participated in an archaeological excavation in northern Spain. In 2014, Smith developed a site-specific body of work in Hermannsburg, Central Australia, making ceramic slip-casts of local tree branches, before burning those branches to use their ash as a glaze. Drowned River Valley takes a similar approach, but with an increased level of complexity.

Amid the smoke and chatter of her temporary, plein air studio, Smith explains the layers of research that are folded into her process and materials.

Feeding the fire of the salt farm is a combination of locally sourced timbers: turpentine from a long-derelict Cockatoo Island wharf, and mangrove uprooted by a local council to encourage the return of a natural salt marsh. Smith has slip-cast ceramic recreations of the mangrove branches and turpentine planks, using the ash from each timber as a glaze. The colours of these ceramic replicas tell a narrative of chemistry and process, drawing out ecological and industrial histories: the brown of the turpentine ash glaze, for example, is chromium oxide reacting with zinc. The latter is present in high quantities, Smith has deduced from conversations with former wharfies, due to anti-corrosive boat paint.

The ceramic casts are laid out in a cordoned-off section of the old timber drying store: ghosts of the building’s prior function. Neatly arranged and out of reach, they could be scientific samples or the results of an archaeological dig: and in a sense they are. The island and surrounding waterways comprise the dig site, and Smith’s studio is the lab. She collects, extracts, distils and transforms material in order to study its composition and glean geological, biological and historical information. Drowned River Valley encompasses the process, the objects and the stories embedded in them. 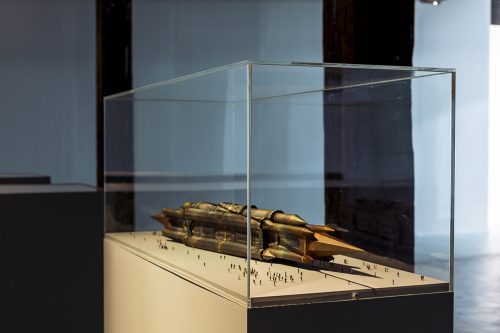 For the 21st Biennale of Sydney, a full wing of Artspace is dedicated to the videos, sculptures, notes and paintings of Belgian artist Michaël Borremans. The darkened space is punctuated with screens, low-lit plinths and glass-topped cases.