Writer Robert Dessaix once said that he knew he wasn’t dwelling on death so much when, years after his HIV diagnosis, he found himself running for trams again. No one likes waiting for public transport.

In fact, no one is keen on waiting full stop. Not for love or inspiration or late friends. Waiting is about holding on and staying put. It’s about filling in time.

Some people – say, doctors – have whole rooms devoted to the act. Magazines, televisions and increasingly phone chargers help distract patients from this forced group pause – and from each other, because waiting, even en masse, tends to be solitary.

The Waiting Room is the name of the next exhibition at Sydney’s Artbank, and although the title conjures up thoughts of waiting in agitation (for diagnoses, prognoses, way-running-late health-care professionals), curator Daniel Mudie Cunningham says the show will also address waiting in anticipation.

“It’s like when I was a kid, waiting for Christmas morning,” he says. “The waiting is part of it. Warhol once said, ‘The idea of waiting for something makes it more exciting’, and I am interested in the idea of time generally and how we occupy it.”

Cunningham, who is Artbank’s assistant director and head curator, says the idea for the exhibition came about partly because the institution, established by the Fraser Government in 1980 to buy artworks by living Australian artists and rent them out, routinely has its work hired for waiting rooms. But he also liked the way the theme of waiting opens up more poetic questions of how we fill time.

“I have a very busy mind find, I find it hard to be still in my life,” he says. “I am the kind of person who has a lot of windows open all the time.”

Though referring to his computer screen, Cunningham says this is a good metaphor for the way he lives. “I find it really hard to find moments of quiet where you let your brain have a rest and in that rest find a way to refresh. It’s a symptom of contemporary life.”

But the Artbank exhibition won’t only be concerned with how we wait in the age of Facebook updating and email downloading. With Artbank’s oldest works dating from the late 1970s, The Waiting Room will include a pre-internet 1978 tapestry by Pru La Motte, one of Australia’s leading art-weavers of the time, with a knack for spinning and dying her own fibres. In The Artist’s Wife, 1978, La Motte depicts a woman dressed in black high heels and yellow dishwashing gloves holding up a man and the text “ordinary thoughts”.  Cunningham likes the way this work, with its humorous and feminist the-personal-is-political thread, touches on everyday domesticity.

Fast forward more than three decades and we get a very different sort of everyday depicted by Sydney artist Emma White. White, who reproduces mass-produced objects in polymer clay and then photographs them, will be represented with her 2011 animation Thief of time, which records the rotation of a lumpy Mac colour wheel. Many of us watch a version of this spinning circular rainbow most mornings without even noticing. That’s because, on the scale of impact on your life, waiting for your computer to reboot must rate pretty low. But it adds up.

Even moreso with the wait for Aboriginal reconciliation. Some waits last a lifetime. Julie Dowling, the Western Australian painter who manages to combine the personal plight of her own family with a broad-sweep Indigenous take on Australian history, will be included with her 1999 paintingThe Ungrateful.  In this work, Dowling depicts an Aboriginal family solemnly, quietly, stoically waiting for what’s owed to them.

There’s a change of pace again in the photograph Sydney artist Cherine Fahd took in Paris during an extreme heat wave. It is part of a series dating from the early 2000s in which Fahd documented people cooling off under sprinklers. Alone, bathed in light and glistening with moisture, these sprinkler-plungers look like they are experiencing a form of religious redemption.

Cunningham says the “slightly rapturous imagery” represents “a moment of repose or pause in a public space”. Removed from the context of a hot 2003 summer, you hone in on the classical art poses and the unselfconscious pleasure to be found in this happenstance respite.

Then there is Katthy Cavaliere’s video, filmed at the beach not long before she died in 2012 at the age of 39. In Cunnigham’s Sydney Morning Herald obituary for the artist he described how, in making the picture, Cavaliere took her late mother’s clothes to a rock on a beach where they had often talked.

“Then she formed the clothes into a nest and sat naked facing the ocean with her back to the viewer, her mother’s stockings on her head flapping in the breeze like an absurd windsock.”

In the context of The Waiting Room, Cunningham says the piece has a meditative quality that feels right.

By contrast, he says, Nell’s Sound is Vibration, Colour is Light, Friends are Everything, also key to the show, documents the pause (in this instance, a cross-legged, meditating woman) as a “really busy steam of consciousness”. Sensations pulse from every pore.

This theme of “waiting” is hard to pin down. It can be a short spell or a lifetime’s endurance. Sometimes it is poetic; at other times it is frustrating, political or humdrum. When it comes to an art exhibition, “waiting” is an almost open brief.

All up there will be about 30 different works and, this being Artbank with its collection of 10,000 works-for-rent, if you wait long enough the exhibition could very well change over its duration.

Cunningham says that over the course of Artbank’s inaugural exhibition at its Sydney headquarters in 2014 he replaced a piece by Paul Yore with a piece by Patrick Pound with a piece by Richard Bell. When art is for hire, he says, “You have to have backup dancers.”

Because time waits for no show, not even one called The Waiting Room.

Clarification: Julie Dowling’s painting, The Ungrateful depicts a white woman collecting First Nation children in the 1950’s and not as the writer interpreted, ‘an Aboriginal family solemnly, quietly, stoically waiting for what’s owed to them.’ 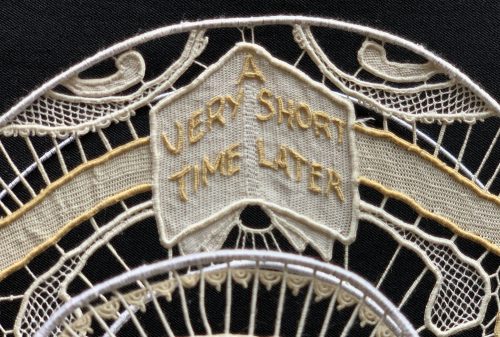