Indeed, 20 per cent of artists chosen for The National at the Art Gallery of NSW, Carriageworks and the Museum of Contemporary Art Australia – with more surveys planned for 2019 and 2021 – are Indigenous.

However, there was no specific number of Aboriginal and Torres Strait Islander artists sought, says Carriageworks curator Nina Miall: “Everyone’s very conscious these days about having a balance, whether it’s gender or cultural diversity, but we certainly didn’t look at what percentage of the population is Indigenous and plan accordingly; we arrived at [the number] quite naturally.”

Nonetheless, 2017 is an important year in indigenous identity and politics, being the 50th anniversary of the 1967 referendum, which voted to amend Commonwealth laws, including counting Aboriginal and Torres Strait Islanders in the census for the first time. Debate over constitutional recognition continues, although almost no national discussion is occurring around a treaty with Indigenous Australians.

Karla Dickens was born in 1967. “If there’s anything positive about [the referendum anniversary], it’s a clear block of time for us to go, “My god, we are just so resilient, and we are survivors,” she tells Art Guide from her home in Lismore, northern NSW.

Dickens has friends around her age, 50, who were members of the Stolen Generations. “If I’m with a group of blackfellas or protestors, then I can look at how tragic it is – how little we’ve gone ahead, what’s still not in the constitution, and whether that’s a good thing or not. I’m really sketchy about [recognition].”

Art has been Dicken’s salvation, helping her to find a way to belong. Raised by loving grandparents, she was swept up in Sydney’s rock scene before substance abuse left her “wandering the streets and mad”. She regained focus, enrolling in the National Art School, where collage became her medium because she couldn’t afford paint.

Two series of Dickens’s work feature in The National this year. The first, Bound, is a series of customised straitjackets, with embellishments such as cow’s teeth and fake flowers, representing the reasons women stay with abusive partners.

“Domestic violence has been a part of my life and a part of a lot of people’s lives,” she says. “People say, ‘You should just leave’, but those works tell a story of why women do stay. It’s not so simple.”

Her other body of work, Fight Club, is a series of used metal dustbin lids, on which her poems ranging from melancholic to acerbic are inscribed. In Black Dog, she writes: “At 15 the doctors gave me my first label. The journey since has taken many forms: inside and out. You are either a cat-person or a dog-person. No holds barred, I’m with the dogs.”

Is catharsis part of her work? “Oh, definitely. And healing. Some people go into therapy; I go into my studio. With contemporary Indigenous artists, art is a good way to look at social and political issues in a safe way.”

Dicken’s fellow exhibitor at The National, Archie Moore was born in Toowoomba in 1970 and grew up in Tara, country Queensland. Of constitutional recognition, he asks Art Guide: “I seem to remember that the state of Palestine is recognised by most of the world – what does it mean for them? Nothing.

“I think it is largely symbolic and am very suspicious of the Recognise agenda when you see the government behind it with big corporations and [will be] voted on by the 95 per cent of the Australian population who are not Indigenous people, who may not understand what it is about, nor care.”

Moore’s work, across various media, is often concerned with misinformation in intercultural knowledge, and has included 10 Missions from God, with little replicas of the Cherbourg mission church popping up from tiny Bibles.

Moses endorsed colonisation and an avowal to avoid a treaty, says Moore: “The passage I used is from Deuteronomy and talks of God endorsing invasion of other nations, killing all the men but saving the women and children for themselves, taking all the resources and no treaty shall be entered into.”

In his new work commissioned for The National at Carriageworks, Moore has created 28 flags based on an Australian map produced by a white, lay anthropologist, R. H. Mathews, around the time of Federation, which claimed to identify all Aboriginal nations.

Mathews had a biblical idea of what constituted a nation, says Moore, that “God had people demarcated along national lines rather than racial ones. Of course, in his mind and others on the frontier there were two larger categories: civilised and uncivilised nations”.

Moore’s bold and graphic “false flags” measure up to 3.8 by 1.6 metres, though some are square, and feature fauna, dendro, petroglyph, body paint and shield designs.

The artist’s own cultural identity is “unverified and in a kind of limbo space or perhaps an ever-shifting identity. My ancestral history has been largely lost”, he says. At the same time, reverence for patriotic symbols such as the Australian flag with its Union Jack symbol of colonial power is becoming “over the top”.

“I do feel there’s more legitimacy to Aboriginal symbols like body paint as it’s directly connected to the land we’re standing on”, concludes Moore. 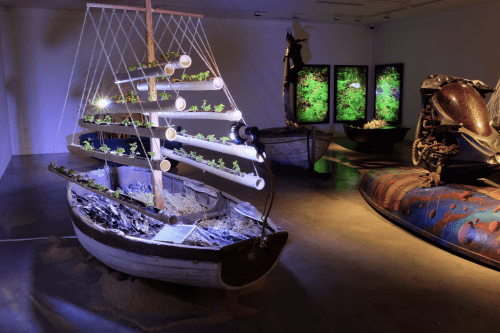 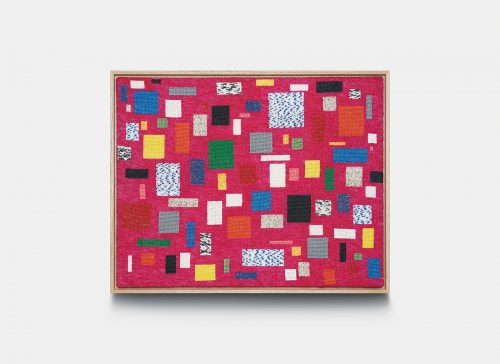