In the group show Nuclear, 50 diverse artists are linked by their atomic experiences. Artists include members of the Yalata Anangu community from the west coast of South Australia, nuclear veterans from the Balaklava community, and Japanese artists who respond to the atomic bomb and more recent nuclear events. These film makers, digital artists, painters, sculptors and writers are brought together by the Sydney-based community arts production company, Alphaville, to continue the tradition of artists responding to nuclear legacies. The responses collected in Nuclear create powerful narratives of ongoing loss, grief, activism and survival.

Between 1952 and 1963 the British Government, with the support of the Australian Government, carried out a series of nuclear tests at three sites in Australia: the Monte Bello Islands off the Western Australian coast, and Emu Field and Maralinga in the remote south west of South Australia.

The forced removal of Anangu people from their traditional lands caused social disruption and health impacts that are ongoing. While full control of the area was finally handed back to the community in 2014, a sign there reads: kuka palya, ngura wiya (you can hunt but you can’t make a home). A deep yearning for home pervades all of the works in this exhibition.

Directly opposite the entry to the exhibition is a wall of paintings by three generations of women from the Yalata community who sit together to paint and tell stories of forced migration away from Maralinga. While the bomb is never explicitly depicted, reflecting the secrecy surrounding the testing and its aftermath, the ominous mushroom cloud is a strong repetitive motif marking trauma. Mima Smart’s Life Lifted into the Sky, 2016, is a small but powerful painting of the deadly cloud. Other paintings in the group depict the roads, trucks and railways that so potently symbolise incursion and migration, and paintings of bush camps tell complex stories of belonging and alienation.

Alongside the Yalata paintings, the bronze Tree of Life: Gift of Peace, 2016, represents the links between the Yalata Anangu community and the survivors of the atomic bombings in Japan. An identical sculpture was given to the Nagasaki Peace Park on the 70-year commemoration of the Japanese bombings.

The Japanese term for a survivor of the atomic explosions at Hiroshima and Nagasaki is hibakusha. Japanese artist Yukiyo Kawano is a third generation hibakusha. Her work, Fat Man, 2016, a life-sized replica of the A Bomb dropped on Nagasaki in 1945, dominates the centre of the gallery. This soft bomb, made of kimono and other fabrics dating from the time of the bombings, sewn together using strands of Kawano’s own hair, holds the atomic fallout in its DNA. The fabric hangs like skin, describing a fat and flaccid object. Like the bomb itself, this work elicits both repulsion and awe. It is the only direct representation of the atomic bomb in the exhibition, and silence opens up around it.

Photographic exhibits from past campaigns against nuclear waste repositories and for the rights of nuclear veterans, and ceramic works by Yalata’s Warren (Ebay) Paul explore what Alphaville’s creative producer, Paul Brown, calls the “slow emergency” that is the nuclear legacy. Two immersive digital projections, 10 Minutes to Midnight, and Ngurini (Searching), 2014-2016, also explore the past, the present and possible futures. The audience, seated within the cylindrical projection screen, experiences something of the slow and shocking unfolding of the atomic testing disaster. Ngurini speaks of forced dislocation, and of searching for a path that finally leads home.

With the South Australian State Government currently conducting reviews and community consultations into possible nuclear futures in this state, Nuclear at Tandanya should be compulsory viewing. 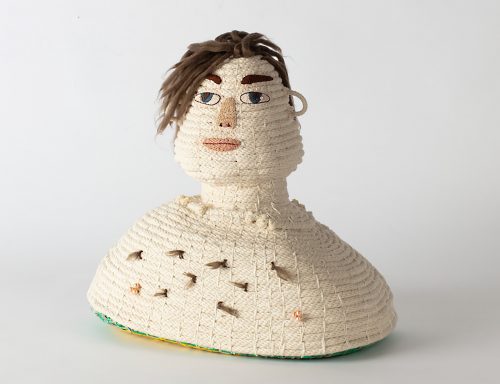