My journey to meet Lynda Roberts and Ceri Hann, of the creative studio Public Assembly, is not without incident. With daylight receding quickly, the bus ploughed through peak-hour traffic skirting Port Phillip Bay for a stretch. I sent Roberts a text to let her know I was on my way, and within minutes there was a soft thud close to where I sat. It was Roberts – she had tapped the bus with her bike while overtaking it at a red light. I could see her and Hann through the glass, mere centimetres away. How odd then to climb into their studio – Daisy – a repurposed ice-cream truck now parked on a small bridge over an inner-city canal and experience the same sort of inside/outside street view. It didn’t feel quite dangerous as it did transgressive; to sidestep the constraints of space that come with high property prices and work in the street. It is perfectly legal to park a van in the street, and last year, Roberts worked on her PhD parked here outside the couple’s home and across the city.

While a caravan was perhaps a more obvious choice for a mobile studio, it was rejected on the basis of not only its holiday associations but also as a site that is inhabited. With an ice-cream van, says Roberts, “it playfully intervenes into the urban fabric – it very much has this suburban nostalgia.” Added bonuses include a PA system and the public’s fluency in approaching an icecream truck. Though for all its positives, Roberts admits the van is not without its dilemmas, “this being a white British ice-cream van, it’s still somehow linked with colonisation.” Daisy is version two of this mobile space from where Public Assembly has launched projects and interventions. “It’s a really slow project – it is a project, but it is also a space; it works as both. It’s the platform from where we become public.”

Studio practices and visual art practices in general tend to be solitary pursuits. While Roberts and Hann do have separate practices that are very much object-based, there is always a public-facing and discursive aspect to what they do. Hann explains, “I think it’s very important, in any area of art making, to kind of reinvent what that is and can be, and to communicate or share the tools that we develop with other people – to continue to make life interesting.” He tells me this while Roberts chats to a curious neighbour, who, upon seeing us in the van, wanted to know what we were doing and if this was a food truck. Hann shared our paprika-dusted popcorn with her.

A project that predates Daisy by a few years is Public Assembly’s incursion into Camberwell Markets, which began in 2007. Setting up shopping trolleys among the trash and treasure stalls, the couple sourced objects from around them, modifying their finds into jewellery. Having Daisy at the markets now has altered the dynamic, Roberts explains. “We’re in a closed in space, it changes the way we operate.” The outside of the van is magnetised, and the jewellery is attached to its surfaces, luring the public in. The ideas of creating in situ was in spired by Roberts’ architecture teacher, Richard Leplastrier, at Sydney University who suggested his students camp on site, dwelling on it for 12 months before they make a mark on the land. The objects are a vehicle for “uncontrollable and delightful moments to happen” says Hann. They are then given away at a price decided by the buyer. “People get very confronted about that in terms of what’s the value of the hours that we’ve spent making these objects, which is what we’re playing with,” says Roberts. The weekly Sunday market is a bargain-hunter’s paradise, 50 cents might change hands for these one-off objects. But while the project is self-funded, the duo refuses to take their practice into a craft market environment. Roberts was employed for four years as the Public Art Program manager at the City of Melbourne, and during that time, “giving [the jewellery] away became symbolic of having a practice,” she explains. Hann adds, “It was a way of maintaining a latitude within a rigid system.”

Hann, who works in the School of Art at RMIT University, completed a PhD, an undertaking that involved the creation of improbable objects – such as a seven-sided dice that were gifted, precipitating conversations. “The objects enabled a kind of real world and hyperlink to remember space, place and connection,” says Hann. Roberts meanwhile calls her recent 12-month PhD a charrette – a word that stems from the French for cart or carriage. “Charrette is a methodology that designers use for working very intensely – this space became the carriage where the ideas were developed.” Collaboration is a key aspect of a charrette – Roberts invited her creative network developed at the City of Melbourne to workshop strategies for producing public art. The result of the workshop was a deck of cards “for when you get stuck – the idea was that it was an oracle for public art predicaments, ‘what is your issue? Let’s see what the cards offer.’ People would play a hand of cards, selecting one as a provocation to overcome their problem.” She picks one up, “Build and nurture a coalition of the willing.”

The most recent project from Public Assembly is Out of Viewfinder, running until mid-September at ArtSpace at Realm in Melbourne’s east. Using found and modified optical devices such as cameras and various lenses as props, the duo has set up a green-screen in the gallery where the audience is welcome to observe and be observed within various locations like the shopping centre and town square in Ringwood, holding these apparatuses. “We’re always exploring different ways in enmeshing participation,” Roberts says. “While there’s a playful aspect to this, the exhibition had its genesis in encroaching surveillance technology, particularly the recent news that [two] Australian universities are sites for the development of surveillance technology for China.”

“In New South Wales they’re saying that they are going to move away from the tap card on public transport – it will all be facial recognition as you walk through the station.” Ironically, sitting here in a white van at night, the three of us look like we are surveilling the neighbourhood.

Out of Viewfinder
ArtSpace at Realm
1 August—15 September 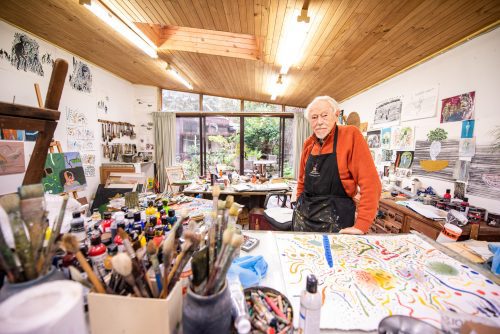 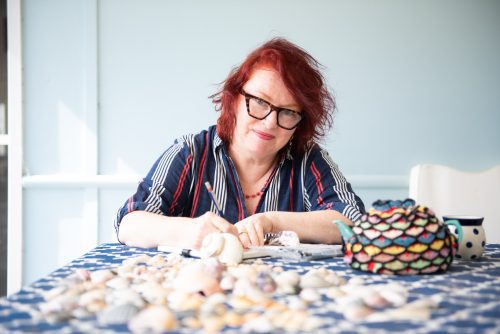 “What I think of as my real work happens outside the studio and in exchange with other humans.”