“There’s a reason there’s a resurgence in a kind of contemporary gothic because we haven’t addressed a lot of the ideas around landscape, and the identity of the culture in which we live in. We do live in cultural denial at times.” – Mark Shorter

Where one would expect to hear a set of industrious clangs, the metal studio at the Victorian College of the Arts is devoid of the din of school term activity. On a January day, Mark Shorter, lecturer, artist and Sydney ex-pat, is working solo in the well-equipped space.

Although he is also a studio artist at Gertrude Contemporary where some capacity to do casting exists, it is hard to pass up the opportunity to use the grinders and linishers or have unrestricted access to the vast space. Shorter is casting 22 candleholders from pewter, a metal alloy popular in the production of decorative objects in the Middle Ages. The forms are both a functional and sculptural object, forged atop a low-tech electric hotplate in the workshop. Shorter is refining some of the pieces that he has cast: “You cast them. Then you cut them. Then you slowly hone them down so that they’re square and flush.” The stems of the candleholders look unassuming when unattached to their bases, more like a tool. The candleholder’s design however is lifted from the Mérode Altarpiece which depicts the Annunciation – the moment that the Virgin Mary learns from an archangel that she will bear Christ – painted by Robert Campin in 1428. “I selected the work,” says Shorter, “because of its gothic feel.”

During The National – a survey of new Australian art across three venues – he had intended for visitors to enter his installation, a darkened chamber at the Carriageworks site, holding one of these objects. A few days after vising Shorter, the candle idea is scuppered due to fire restrictions in the gallery space.

Shorter is quite pragmatic about losing this element from the installation. He tells me later over the phone that his “work has been slowly evolving.” Instead of lighting the way with candles, he now talks about experiencing the darkened chamber in a dual mode: in pitch darkness and briefly illuminated by flood lights. One thing stands: “there’ll always be something haunting you as you go through.”

The haunting is provided by one of Shorter’s alter-egos (he’s got three so far). Schleimgurgeln, German for mucus gargler (“he’s so named because he is non-verbal”) is a time-travelling landscape critic who has inhabited earlier works of Shorter’s and whose occupation it is to reflect on the Antipodean space. He’s been at it for two millennia – since Aristotle reasoned that in order for the earth to be balanced, the northern mass must have a southern counterpart. Schleimgurgeln “moves through a continuum of space and time” where Europeans project their uncertainties and desires of the South onto the landscape.

In Waterwalker, (2017), Schleimgurgeln was caught emerging naked from water, an apparition on glass negatives made from 19th-century photographs of the Nepean River. In 2012, the bespectacled “eggeyed” figure, whose naked body is covered in tufts of down, provided a 12-minute lecture titled ‘Terra Australis 750BC to 2012’ at the Museum of Contemporary Art in Sydney. His talk consisted of howls, groans and roars that accompanied a slideshow of altered landscape paintings by colonial and modern artists. The audience is heard cackling and squealing with delight at the oddity at the lectern, as well as at the doctored images such as a Fred Williams painting collaged over with a multiplicity of Don Burke’s head.

At The National the extant critic is tasked with critiquing a copy of von Guérard’s North-east view from the northern top of Mount Kosciusko which will be confronted in the “unstable space” of the dark chamber.

Von Guérard’s painting was displayed at the Vienna Exhibition in 1873 and now rests at National Gallery of Australia, and while it does have topographic correlation with the real landscape, it is coloured with ideas of the sublime – the awe-inspiring greatness of nature. “Landscape is not just a construction of what we see,” elaborates Shorter, “it’s a construction of what we are.” It’s this unresolved view, hampered by viewing it in both darkness and in light, of a European vision of Australia’s landscape that will be encountered in the installation. The creature Schleimgurgeln, meanwhile, is the European ‘other’; an echo from the past that reverberates to our time.

“I think an idea of kind of a gothic sensibility for me is that, if we think about it in terms of the darkness, it’s going to make something around the idea that we don’t, I guess, truly know the dark recesses of our souls.”

At his studio at Gertrude Contemporary, Shorter continues his dissection of the themes of his work: “On a broader level, it’s concerned with ideas such as landscape, power, myth. The idea of exploring the edges, the unstable qualities of constructions that we make for ourselves, in terms of how we understand our world.”

While the working space at VCA is opportunistic and Shorter’s candelabra and their silicon moulds could be gathered at a moment’s notice, his Gertrude studio space is peppered with the artefacts of past shows and other alter-egos: the vaudeville cowboy Renny Kodgers and the deluded voyager Tino La Bamba. “This is a place where I can leave things and allow for that accrual of ideas and forms to happen.”

Boxes of matches cover a table – Shorter is fashioning large matchsticks for his upcoming show which Schleimgurgeln will strike against the von Guérard painting, marking it. Likewise, the creature will be illuminated by the sudden flash of light in the chamber and leave a ghostly mark on the viewer’s sight. 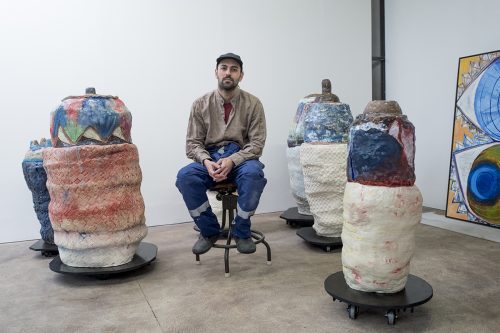 “I wanted to sort of feel limitless and not be governed by any idea of scale – to make things I wasn’t sure how to transport. I didn’t want to think about it, I just wanted to go for it. And you get to a point with a certain scale that you just become comfortable and it’s not as exciting. Maybe also, I was past that point. I needed to feel almost threatened.” – Brendan Huntley 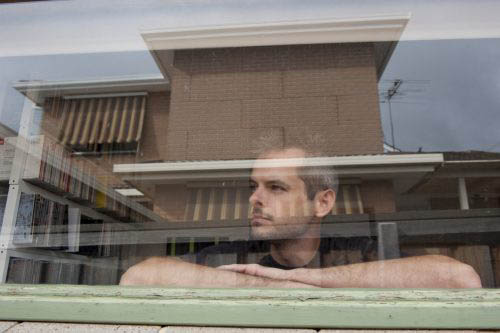 “I have an odd sort of studio, a tiny room in the middle of my house. There are only one or two square metres of space I can actually walk in, the rest is taken up by shelves, desks and equipment.”