Halinka Orszulok is known for her paintings of night hour landscapes that have a deeply entrenched psychological aspect to them. There is a feeling of longing and estrangement in her carefully rendered suburban clinker brick homes, lit unevenly by streetlights. Viewers, by transference, also find themselves as outsiders, out in the dark, a place Orzsulok has named ‘unhomely.’

Born in Poland, Orzsulok immigrated to Australia with her family as a child and is now based in Jamberoo, on the south coast of New South Wales. This year she won the prestigious landscape award, the Glover Prize, with Ponies – a painting of the children’s playground in Cataract Gorge in Launceston, after nightfall. A Sydney College of the Arts alumna, Orszulok has been exhibiting for almost 20 years.

Varia Karipoff: Tell me about Poland, what do you remember about your country of birth?

Halinka Orszulok: I was three when we left Poland. We left at a time of unrest, along with many other Poles. I wish I understood more of this time. I know that the country was a complete shambles, for instance, you couldn’t buy anything in the shops. People queued for days with ration cards. Everything was done on the black market. There was a fear of the secret police so my parents’ decision to leave was made quickly and in secret. We travelled to Austria with a backpack each and US$200 where we applied to be re-settled.

The bits I actually remember are snippets, almost singular scenes like a few frames of a whole film. I remember sitting on my grandmother’s lap in Poland, being fed baked apple with jam inside. Looking up at a strange sky out the window of our moving car while driving slowly in queues of traffic, passing through immense amounts of snow banked up either side of the road.

VK: In your transition to a new country—what were your biggest anxieties or difficulties?

HO: Not being able to speak the language and having to start school was tough. You exist in your own world when you can’t communicate and for some time home was the only place where I was understood. By primary school, kids are very astute at picking up difference so I became very aware of the ways that I didn’t fit in. Making friends as an outsider is difficult.

My parents divorced when I was seven and our home lost its sense of comfort and security. There’s a reason people call it a ‘broken home’. It stops working, totally empties out of meaning. To a kid, that is terrifying. The first year in particular was incredibly bleak.

VK: When did you know that you wanted to be an artist? Were your parents encouraging?

HO: My parents were both encouraging but my mother in particular.

Initially I was really torn between studying drama and art, but my mum (who is, incidentally, a psychiatrist) had a talk to me about the pressures of acting on the psyche. She suggested that art might be a healthier option. When I was accepted at Sydney College of the Arts she raised new concerns, about art school being a hotbed of sex and drugs. I rolled my eyes and promised that I would not succumb to any peer pressure. It was not nearly as exciting as my mum had made it out to be.

I did, however, early on, meet a lecturer in the Sculpture, Performance and Installation department, who performed for his new intake of students by wrapping himself in cling film and having cold meats laid out on his body as a welcome buffet. Apparently it was a gesture of giving and the sharing of knowledge – I’m not sure what she would have made of that.

VK: Did you major in painting at art school? What was a crucial lesson you learnt?

HO: I did major in painting, though I did think about studying film and photography and I think that shows. An important thing I learnt was not to worry so much about not being educated in everything. Background knowledge is great, but what is crucial is that you focus on feeding your particular interests.

VK: Before painting a work, you initially take photographs of outdoor scenes at night. What do you look for in a photograph? Is there a particular atmosphere or mood that you seek to capture?

HO: I am really guided by my instincts when taking photos for my work. I will have a vague idea of the area I want to explore; generally artificial light needs to be present, though I have worked under a full moon. I don’t know exactly what I’m looking for at the time, but I do absolutely know when I’ve found it.

Each painting is a big commitment of time so I need it to sustain me through that laborious process. The mood I seek is one of being an onlooker, an outsider, of danger, solitude, and maybe excitement. Generally, it’s a feeling of ‘unhomeliness’. If you think of all the things one associates with the idea of home, it is everything that is the opposite of that.

VK: What does a photorealistic painting capture that the camera can’t?

HO: The image is fixed to the canvas, processed through the mind and the body of the artist. That kind of obsessive copying seems to bring the image to life in a way that photography does not. I think it helps the image become psychoactive in some way, more of an object, weightier, more bodily. Don’t get me wrong, I am a lover of good photography, but its signification is different.

VK: What were some of the considerations you made when choosing the scale of your works?

HO: Their relationship to the body when the viewer is looking at them. Sometimes I want the viewer to come in close, when looking at a smaller painting they need to use their mind to access the subject, almost like looking into a book. Sometimes I want the experience to be more physical and immersive, so I’ll increase the size. Also, the size of our station wagon, so many artists will tell you that.

VK: What are some of the technical difficulties of rendering scenes with artificial lights, deep contrast and shadow?

HO: I need to make sure I keep the contrast nice and strong, it’s easy for things to get muddy, picking out the colour and brightness in a dark image can be challenging. I hope I have developed a good sense for the many different tones of ‘black’. I’m forever gauging whether I need a blue black, a red black, etc. Any painter worth their salt will tell you that there is really no such thing as ‘black’, just really, really dark something or other. Light bursts are really tricky to paint but I am getting better at them. In the centre you have white with rays permeating the darkness. Getting that transition and the effects of the light on the surrounding landscape takes dedication.

VK: Your paintings of strangers’ homes are not so much voyeuristic as they are melancholic, searching and tense. Are these paintings a way of grappling with the particular emotive state that renders a house a home?

HO: Yes. Absolutely. It is after all, a state of mind and not a place. I’m interested in how a thing can have a flip side, become a signifier of the exact opposite meaning it is generally assigned.

VK: Night breaks down the border to civility, and, as you wrote, to the “traditional binary division between nature and culture, the wild and the tamed, the known and the unknown, the rational and the irrational”. Night affects every living organism on earth in some way – on physiology and behaviour, yet it is largely a background detail in our lives. Where do you want to go next with the idea?

HO: I see night-time not so much as the subject of my paintings but like a filter I apply that helps me access that space of subconscious mirroring. A dark mirror, to ourselves, but also more broadly our society. In the future I am really interested in finding ways of engaging with other people’s experiences.

This article first appeared in the July/August 2018 print edition of Art Guide Australia. 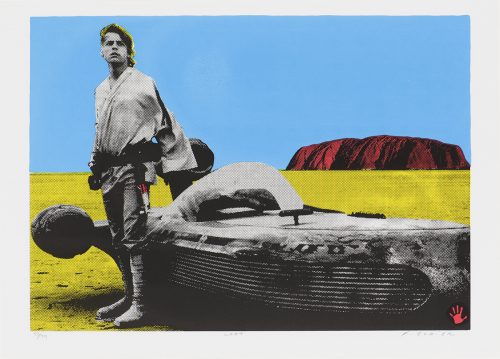 Darwin-based Franck Gohier’s retrospective at the Museum and Art Gallery of the Northern Territory, A Thousand Miles from Everywhere, showcases the past two decades of his practice. 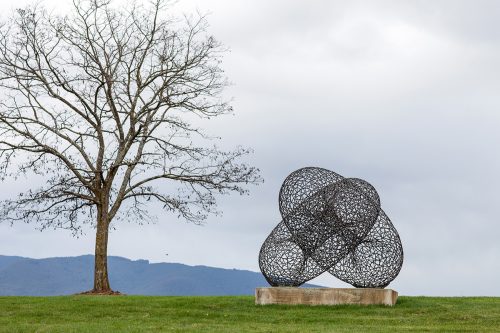