It was Pat Hoffie’s Countdown to Midnight Series (2020) shown at Fireworks Gallery in Brisbane (February/March 2021) that drew my attention to notions of time being a constant thematic in many an artist’s practice. Seven works, reminiscent of travel posters with banner headlines, proclaim TOMORROW in dominating white text that has not quite registered. Each ‘countdown’ variously addresses a contemporaneous sense of unbridled economic growth based on the exploitation of human and environmental resources, and the consequences: degradation, destruction, disaster, death and ultimately extinction. Countdown to Midnight is a series of bleak expressionistic water colour and gouache paintings printed, ironically, on glossy paper that intensifies the saccharine colours used to convey a sense of questionable commercial design for the promotion of a dubious destination. The ‘queasy’ pastels of a pre-teen bedroom clash to assault their audience with an apocalyptic vision of the future that is quite simply a legacy of its past. Hoffie’s TOMORROW, is today. Alongside this sequence were paintings from the Clusterfkk series incuding, I am scared. I stand up(2020) with its title borrowed from Colin McCahon’s pronouncement of existential anxiety followed by a decisive declaration of fortitude and faith, Scared (1976). Clusterfkk responds to the idea of the epic, a form that since Breughel and perhaps before, used the events of the time to spotlight the folly of humanity with an occasional glimmer of hope.

In conversation with Alex Asch, we talked nostalgically about a series of TIME/LIFE books on photography he had discovered, worn, damaged and discarded. From 1936 Time Inc. dominated global publishing for sixty-five years covering politics, science, environment, technology, and entertainment. Humanist values were sometimes expressed through iconic photographs that situated photojournalism and portraiture at the forefront of a communications revolution that would inundate the global masses (albeit) with a distinctly American brand of humanitarian philosophy. Asch notes, “Although I was five years old in 1970, I always think of myself as a child of the 60s. I remember this time in black and white: the outstretched arms pointing over the balcony after King’s assassination; the Vietnamese girl running crying, covered in napalm burns; the dead student bleeding at Kent State. These searing images that showed America’s descent into madness were always in black and white. This dystopian kaleidoscope seemed to point towards our future.” Drawing upon a personal romance with the past Asch’s ‘assemblages’ are sourced from Time Life Annuals of the 1960s and 70s, re-presented as fragments of images that reflect upon how we arrived at today. The juxtapositions are variously disturbing, mundane, stylish, mysterious and powerful, reflecting the eclectic layouts of variety magazines. Celebrating the seminal socio-political role of photography during the 1970s, as well as its craft and quality, Asch’s reconstructed black and white worlds discharge a volley of recent history into our present. Like Hoffie’s prints they represent some perplexing views of times past, present and future. 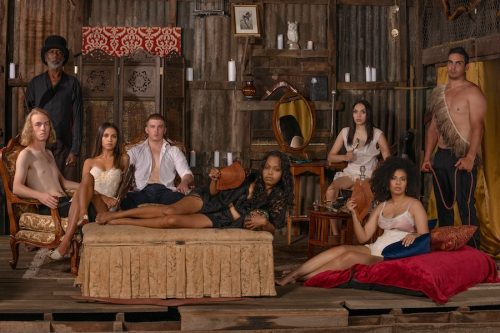