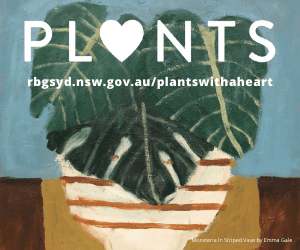 Bundanoon-based artist Clara Adolphs is becoming somewhat of a fixture in the art prize and award circuit. An Archibald finalist in 2016 and 2019, and collecting the 2017 Eva Breuer Travelling Art Scholarship, the artist mines an archive of castoff vintage photographs to make works that contemplate the passing of time and the universality of small moments.

To capture her anonymous, enigmatic subjects, Adolphs turns to a palette knife and brush, working quickly with thick impasto paint in a kind of performance that reimagines and replays the lost moment within the photograph’s frame.

VK—Can you tell us a little about where you grew up? What was your favourite pastime as a child?

CA—I had a fairly suburban upbringing in Sydney’s north. I was the third in line of three girls, so a lot of the time I was left to my own devices and enjoyed creating worlds of my own. I drew a lot, pages and pages of people with particular personalities and characters. Nothing’s changed really.

VK—What was the biggest lesson you learnt at art school?

CA—Fat medium over lean medium. And the fact that you can have a career in painting.

VK—From what I gather, you’re a fan of David Hockney. When do you first recall encountering his work?

CA—I think the first time must have been in high school. I saw Hockney’s double portrait Mr and Mrs Clark and Percy, 1970-71, in a book. I loved his double portrait series and the pencil drawings of friends and family. His work gave me a lot of direction early on. I also loved visiting A Bigger Grand Canyon, 1998, at the National Gallery of Australia. I’ve always found the scope and range of his work inspiring, as well as its simplicity.

VK—Your paintings are often based on sourced photographs. Is there something cryptic and restrained in them that has gradually eroded as we have been inundated with images (and as we produce so many of our own)?

CA—Absolutely. The photographs, their owners and subjects are anonymous to me. That in itself creates a restraint. I purposefully seek out these types of images; I like the mystery. There is always mystery in a photograph – what came before and after it was taken.

Even as we are inundated with images, there is always a human behind them.

I get overwhelmed by the number of reference images I have. I can’t imagine ever getting through them all.

VK—In many instances, older photographs were created with often a less public but a more formal intention, and due to their analogue nature they would have only been shared in person or through print. How do you navigate the complexity where these ‘lost’ photographs are recreated in a painting?

CA—I find these photographs in bulk online or from deceased estates, usually discarded – I think that’s because people are unwilling to destroy them. I like the idea that these moments in time, that are long-forgotten, receive a new life in front of an audience. There is something familiar in these images. They have a universal quality, as though these people are known to me.

VK—Do you think time and transience, which are the main preoccupations of your practice, are becoming more obsolete ideas when every passing thought can be recorded for future posterity?

CA—Sometimes I think my work has a performative aspect, as it has to work in the instance that I am creating it. I work quickly, wet on wet. I can create, say, 10 works and only one will leave the studio. I am creating a new moment in time from a past one. I am trying to discover what that means – I like to think that the moment the photograph recorded still exists. Photography is like the ‘ink’ in time, but there can be so many interpretations of that record. And I suppose my painting is one interpretation and then the audience has another. Time changes many things, but it doesn’t change human nature.

VK—How do you approach making a body of work – what connects works in a series for you; is there a narrative or compositional approach?

CA—I have an archive of images that I am constantly adding to. To start out, I go to the studio with whatever image moves me that day without trying to overthink it. As work builds up, I begin to curate an exhibition and start to get an idea of the narrative. I then create new works in that direction, or the opposite direction, to create the balance I am trying to achieve.

VK—When it comes to your colour palette, there’s quite an emphasis on greyed teals, mustard, beige and pastel colours that are associated with mid-century design. Is there an emotional component to your use of colour?

CA—My colour palette has been informed by my use of black and white photography early on. I’ve had to imagine the colours for myself. As with old colour photographs, the colours are simplified. This is something that I am certainly drawn to.

I think the use of a limited palette puts a greater focus on the subject, as the distraction is limited. Colours can imbue a certain emotion, or in turn can be quite neutral. But again, this is very intuitive for me.

VK—What most surprised me about your work is the scale – what tension do you work with when paring down the detail in your paintings while working on large canvases?

CA—The project that I embarked on for my residency at the Cité des Arts in Paris last year was to simply make larger work. Previous to that I was making much smaller canvases.

I was aware that the scale of my work is relative to me. I had created a habituated practice relative to my body size and it was something I sought to extend. I wanted to create larger, more immersive scenes in painting.

This is something I’m still working on. The photographs I work with are mostly very small and in blowing them up, the figures and objects in the image become increasingly abstract, so I am required to create detail that isn’t there. But at the same time, it’s important not to get too tied down in detail.

VK—How did you spend your time at Cité des Arts, Paris last year?

CA—It was a rich environment to be immersed in. I pushed myself and my work in ways I couldn’t have done in my home studio. I felt as if I started a new chapter in my practice. The scholarship I received also allowed me to travel around Europe to places such as Vienna and London to see specific exhibitions that I was interested in too. It was a wonderful time in my life.

VK—Did you come away from the residency with a new insight into your practice?

CA—Yes, my greatest insight was to not overthink things; to believe in my intuition and go with what moves me that day. My previous work and the abundance of my reference material can weigh heavily on my mind sometimes.

VK—How did it come about that you painted both artists Rosemary Laing and Geoff Kleem for your 2019 Archibald entry?

CA—I met Rosemary and Geoff in Paris. Geoff was also on a residency at the Cité des Arts at the time. My husband and I got to know Geoff over a few nights out in Paris.

I visited them back in Sydney and began the portrait from there. I wanted to paint them as a couple. It can be difficult to capture that dynamic, but it can create the unexpected. Then there is always the task of getting two faces right, as opposed to one. I painted 10 or more works in my studio – just like my usual practice, working quickly, building confidence, and eventually the successful painting emerged.

VK—How did you decide to present the two?

CA—It was a challenge and I did feel the pressure since they are artists I admire. They were very obliging, allowing me to photograph them all around their home and studio. I attempted painting them in a few different poses and scenes, but I always had in the back of my mind that I wanted them in their garden, away from the studios. To me it felt more intimate.

VK—What are you reading at the moment? 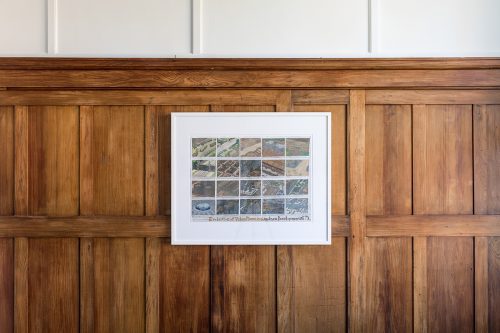 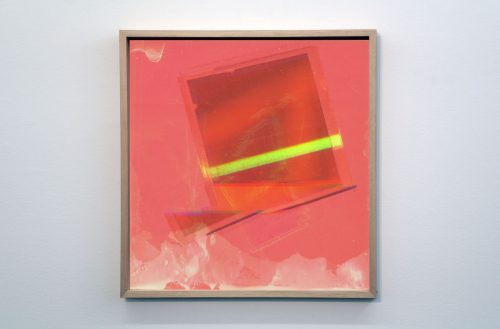 The work of James Geurts traverses a range of territories: fault lines in Bendigo, archaeological sites in Melbourne, Litchfield National Park in the Northern Territory, tectonic plates colliding in Italy and two different points on the meridian.