We’re standing in a suburban garage, the kind that immediately hits me with childhood reminiscences. Summer; lemon and fig trees; garden hoses and leaving wet handprints on a concrete driveway. I wonder if perhaps the garage holds a chest freezer full of Zooper Doopers. I shake off the sneaking nostalgia and look around at the cluttered workspace with the metal garage door propped open to let light in. “It’s pretty rudimentary,” Bryan Spier says of his garage studio. “I never shut that door, it feels too claustrophobic. I just rug up [in winter], I wear like 20 jumpers,” he half jokes. In summer, the studio is hot and dusty, and it’s not the most generous of spaces – “I have to constantly be rearranging the space and shifting things around. I was working on the big ones flat,” he points to some carefully wrapped paintings, standing well over headheight, “and had to put them up against the wall. I couldn’t really work on more than one at a time.” But for all of that, Spier is “going to make it work somehow,” he says, and that’s for the enjoyment of the process, for the small snatches of time he steals in here between caring for his young son and teaching interior design at the Royal Melbourne Institute of Technology (RMIT).

“I’m kind of at the point right now where I’ve just had a show and I’m starting again,” says the softly spoken artist. “Part of the process is to kind of rip everything out and refine, look at stuff that I’ve done before, look at books, try to find some inspiration and clean up the studio.” We’re at ground zero or the point of regeneration: the floor of the studio, with its paintsplattered carpet, is covered in trials, drawings on paper and old works. Tying the jumble together is colour and his distinguishable style; part Kandinsky eye-candy, part candy raver, it reverberates with musicality and movement. As we speak, electronic music plays unobtrusively on a laptop.

“One of the primary interests is in setting up a scheme where I can orchestrate colours in a way they have an immediate impact, but they also move.” Colour is crucial; a painting may look finished, colour covering the entire surface,but the wrong tone will mean a bung note. “Then I just have to go back into it and change all of the colours. And if you change one colour here, it changes all the other relationships,” says Spier. He pulls out a few used palettes, the ones that look like large ice cube trays with a dozen or so colours in each one. “I’ll make a sequence of colours, sometimes several of these palettes long. So, I’ve got it all mapped out.” Spier will often go back to these colours for the next painting, tweaking them, darkening, or perhaps he’ll “add a tertiary colour to knock back the saturation.” “I’ve got kind of a mental system,” he says. It might not always be totally logical, he continues, “but it’s a really important part of it.”

Spier works from the couch sometimes, making small sketches, trying out concepts and fine-tuning the combination of colours. For the artist, these initial outlines are a way “to test the viability” of a thought before committing to a painting, not as a maquette or a strict draft. “I don’t design the paintings, I’ll work out the basic principle. I don’t know really where they are going to go.” This idea seems to contradict the very defined colour fields, the logical progressions of colours and the clear lines that dominate Spier’s paintings. His practice exists at the fulcrum of order and chaos, or at least of logic and intuition. He has a bunch of tricks to keep a balance.

“When I started the last show at Sarah Scout [Presents], when I started working on it in earnest, I just thought, ‘I can’t do it’.” Spier works best when the deadline “starts really looming.” It is then, he says, that “my ideas start to concentrate to the point where I can get out here and tackle a large canvas.” In contrast, once the ball is rolling, a more methodical streak takes over: “I had a calendar with all the time blocked out. I kind of worked it out by the days and hours.” Overestimating how long it will take is a ploy to give him ample time. “It’s a fair bit of work involved, especially in the big paintings. I was thinking the other day that the big paintings are like rock climbing – it’s really intimidating and kind of stressful while you’re in the middle of it. But once you’ve done it, it’s a great achievement and you can kind of step back and see it.” 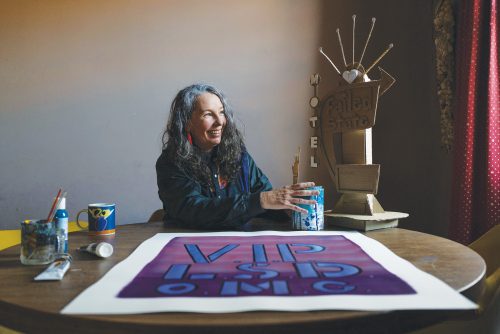 “How good can we get something to look, that’s got no value, really?” says artist Natalie Thomas. “I use $2 shop paint generally. I just look around at what I’ve got access to and use it, see how good I can get it.”