Writing in the Expanded Field

Writing in the Expanded Field

Writing in the Expanded Field is a digital publication  featuring contributions by 14 emerging writers who participated in a workshop of the same name, held at the Australian Centre for Contemporary Art (ACCA) in conjunction with their 2018 exhibition, Eva Rothschild: Kosmos.

Art Guide Australia participated in the project as one of three media partners.

In their essay ‘Intentions,’ which is reproduced with permission below, editors Anabelle Lacroix and Lucinda Strahan introduce the aims of Writing in the Expanded Field.

Kosmos refers to the large sculpture in the exhibition, but also inclusivity: the cosmos, the world, the universe, and the idea of something expanding. Which is very much how I view practice, as something that should always be expanding. —Eva Rothschild

What does a writer do if released from the obligation to explain the work of art? What do they do with work that has no interest in being interpreted into language? Or, in fact, deliberately obfuscates our habit of doing so in the age of communicative abundance? ‘I don’t understand people’s desire to have everything explained to them’, Eva Rothschild said while in Melbourne for the opening of Kosmos at ACCA, ‘get confused’, she implored, ‘stay confused… being with objects is perhaps more important than the desire to ‘get them’ or read them because they aren’t always legible.’(1) Rothschild’s invitation—her provocation to encounter and experience her work outside language, made Kosmos an ideal, and wildly challenging setting for an exploration of new positions from which to write about art.

There is evidently a movement toward a diversification of form and approach in contemporary critical writing, involving literary and hybrid ‘critical-creative’ modes. The growing popularity of ekphrastic poetry is evidence of this as is the emergence of ‘nonfiction poetry’(2) and a renewed interest in the Montaignean and Barthesian essay tradition. Work done in the academy on methods for writing the intersectional, embodied and located subject position of the critic into the critical encounter is also relevant here.(3) Moves off the page into performed and dimensional essaying, and digital textuality broadens horizons even further.

In various ways, the new approaches to writing art that have been discussed and explored in this program, address the various binds writers in the gallery often find themselves in. ‘Is it just me?’ they might ask, ‘or am I only here to lubricate the movement of artists and shows through the sharp turns of art world economies?’, ‘What even is criticism?’ another might also say ‘Now that the flaws and exclusions inherent in the voice of theory have been revealed? Why should I—how can I—assume a voice that denies my own subjectivity? The diversification of writing approaches is evidence of the need and desire to move beyond humanist, instrumental and commodified modes of arts writing.

So, what does the notion of the expanded field bring to these questions? Expansion has a kind of common-sense interpretation of almost limitless exploration. For us, it is the opposite of an ‘anything goes’ concept. The expanded field that we refer to was mapped by American Art Historian Rosalind Krauss in her essay Sculpture in the Expanded Field published in the journal October in 1979(4) as a framework to define a shift in sculpture at the time—a sort of un-monumental, non-architectural practice. Krauss’s original essay was born from a need to more precisely locate these emergent sculptural forms within art discourse. In a roundtable discussion at Princeton in 2007, Kraus(5) remembers her landmark essay coming out of a ‘fit of pique, a kind of tirade against pluralism’ that had become the go-to term for sculptural work emerging post-68 in the North American art scene. ‘A lot of my coeditors had begun resorting to this term when something new popped up. They thought, well, this is just another thing on the horizon. There was this kind of shish kebab of things that seemed to be available.’

Krauss’s essay proposed an expanded field based around the key binary notions of landscape/architecture. The expanded field of sculpture ‘both mirror[ed] the original opposition and at the same time open[ed] it’, providing for both ‘an expanded but finite set of related positions'(6) around which to locate the new works and practices. Krauss’s expanded field is not a floating outward on the vapours of imploded tenets, but a way to critically account for an apparent diversification of form that includes its foundational conventions in a definite field. This is the almost exquisite paradox at its heart: a concern with location and precision amid broadening diversity and possibility.

Krauss herself pointed to the transferability of this method of expansion for other forms in her original essay, but at the Princeton symposium reiterated the importance of a foundational opposition. ‘When you do something like these fields, the fundamental binary has to be right or the whole thing is just gibberish.'(7) The fundamental binary expanded in the field proposed here is the Aristotelian opposition between poetry and history that separates, fiction from fact, imagination from rationality, and literature from criticism (where literature is largely defined by the novel). By expanding this binary we open space for a written responses to art that includes poetic and imaginative rhetorical modes, disruptive techniques for unsettling systems of meaning-making, and a broader palette (if we may use this term) for describing the situated and embodied experience of the writer immersed in the difficult work of making-sense of art, that may include feelings of frustration, or mirth or surprise, humour, or discomfort or anger. These permissions opened to the writer exist within a field that also recognises the importance of art historical conventions, and that the diversification of writing practice should not fan out into a pluralist flatland.

The program Writing in the Expanded Field took place in October/November 2018. It was both a provocation from, and a response to Eva Rothschild’s Kosmos (2018), as well as to the current state of arts writing. The exhibition provided a thematic springboard and a subject for this enquiry, and one that necessarily required exploration through embodied affect, location, relationality, and materiality as the key concerns of Rothschild’s work. As writers sat with the show, sat in it, and moved in relation to it, they were encouraged reach into the possibilities enabled by the expanded field in order to follow whatever writerly itching emerged. Their responses documented in this publication are not a definitive collection, but rather a mapping of the field that emerged between the writing program, the exhibition, and the writers themselves.

The program was conceived as collective exploration of new methodologies for writing art and criticism, collaboratively devised between ACCA, RMIT’s non/fictionLab and participant writers. It adopted an inclusive, workshop-based model which encouraged discussion, collaboration and professional development through three key components: (1) a writing workshop led by Lucinda Strahan, (2) a curatorial working group led by Anabelle Lacroix to produce (3) a participant-led public forum. Writing in the Expanded Field: A Public Forum took place on Monday 12 November as meeting of the program and its public. This forum was a key moment in the unfolding of our collective work and thinking, and this publication can be seen as a score of this event, a notation of the program’s key ideas, concerns and activities.

This publication is non-linear and demands that each writer’s position be considered in relation to others. On the main page to the right, the spatial position each writer took in the gallery during the public forum is mapped. Through these positions readers can access each writer’s texts. The forum opened with a statement from each writer on their writing position: what Kosmos triggered for them and the writing approach they were exploring in response. This statement is available to listen to on each of the writers’ pages along with their text written during the program in response to the show. It was always interesting during the program to see how the writers’ responses evoked common themes and concerns, and we hope that readers will discover further resonances of their own.

Lastly, we would like to thank all of the writers for their dedication and work in the program. Their pieces are surprising and diverse and offer a fresh perspective on writing and contemporary art.

Writing in the Expanded Field is a free ACCA digital publication and can be found online. 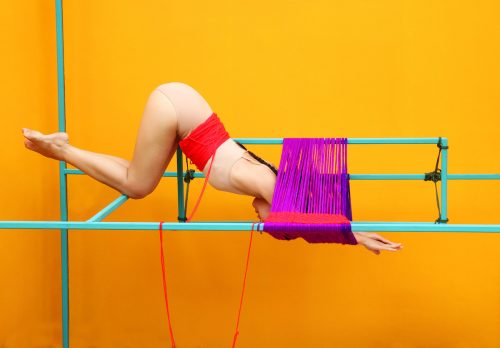 Thai-Australian artist Kawita Vatanajyankur has long been interested in female labour and its relationship to textiles. Most recently she has explored this in video works in which she uses her own body to transform into various tools, such as a weaving shuttle or a spinning wheel.