On the trail of art in northern New South Wales

On the trail of art in northern New South Wales

Local resident Sharne Wolff proves that there is more to northern NSW than sun, surf and scenery. She hits the area’s art hot-spots before cooling off with a swim.

As it often does, our day in Byron Bay starts early with a ritual walk around Cape Byron followed by a dip in the sparkly green ocean. So far the sea is calm, but today it won’t be long before it’s whipped up by the spring northerly. Bobbing about near The Pass, I spy the crooked peak of Wollumbin (or Mt Warning) in the distance. Situated just outside the NSW town of Murwillumbah, it marks the northern-most point of today’s planned art trail. So far, I’ve spent much of the year looking at and writing about art in Sydney and other capital cities. Today provides the chance to rediscover art in my own backyard. My daughter Gee is home on uni holidays and agrees to be my passenger for the day.

We head south out of town and, after a quick pit stop for coffee, drive through lime green hills punctuated with giant stands of bamboo. Our 10-minute shortcut up the Bangalow Road takes in high views of the Bay in the distance. Arriving in Bangalow we run into a couple of artist friends in the village’s cute arts precinct. Chatting on the verandah I get caught up in conversation, while Gee wanders off and orders a juice which arrives dressed with a striped paper straw and a spray of tiny flowers. A glance at my watch and it’s now just after 10am, perfect timing for the opening of Barebones Art Space in Bangalow’s main street.

Run for many years by Ruth and Karen Ryan, Barebones is a local institution although we haven’t dropped in for a while. Today there’s a group show in two rooms, dominated by a careful selection of paintings by Charly Wrencher, Jan Rae and Hilary Herrmann, all of whom live locally but exhibit their work widely. In the third, Ruth is busy organising the gallery’s latest drop of prints which includes examples by John Olsen, Adam Cullen, Frank Hodgkinson and Wendy Sharpe that would rival many city displays. Wandering up the main street, we also pop briefly into Windhorse Gallery, a real must if horses are your thing.

While we could have occupied ourselves all day here, our mission calls and we’re soon heading north on the old highway. More terrific views of the coast and the mountains await at the top of Coolamon Scenic Drive. Although it’s not on our official program, we decide on a side trip to Mullumbimby where the main road into town is dotted with bungalows, like the ones Robyn Sweaney paints, and flame-coloured poincianas in bloom.

It’s the weekend after the music festival and there’s a real buzz in the air. Even the rainbow-clad girl holding the ‘Remember to Breathe’ sign by the side of the road a week earlier has taken a break. In the palm-lined main street we find a car park near the pub and head around to Byron School of Art (BSA) in Dalley Street. Established in the wake of government cuts to TAFE, BSA courses are given by artists Chris Willcocks, Michael Cusack, James Guppy, Emma Walker and others. Occupying a converted mechanics garage, the BSA has its own exhibition space: BSA Project Space. The rear section of the gallery doubles as Cusack’s studio where we grab the opportunity to see some work in progress.

The revolving program at BSA Project Space operates much like an artist run initiative, providing an exhibition space for students, graduate shows, visiting artists and experimental productions. While a class of students work on their art, we chat with Willcocks and Cusack before viewing Fervour and Forfeiture, an exhibition of earthy landscape and figurative paintings by current student Kim Bennett. Using a range of materials including acrylic paint, sand, ink and charcoal, Bennett’s expressive mark-making shows plenty of potential.

Back in the main street, at Art Piece Gallery, a group exhibition of local artists awaits and we discover a well-executed landscape drawing by Wynne Prize finalist Celia Morgan propped on the floor. Displayed around the walls are several large paintings and drawings evocative of the local landscape including those by Charly Wrencher and Jarrah Johnson as well as Julie Corbet’s dreamy abstract in shades of coastal blue. Catering for the growing popularity of ceramics on the north coast, an array of pieces by local ceramicists is also on display. Most prominent is an intricately decorated vessel by Avital Sheffer, an artist whose work has been collected by the National Gallery of Australia (NGA) and Powerhouse Museum among other public institutions.

Fifteen minutes later, we’re finally headed to Tweed Regional Gallery (TRG) in Murwillumbah. The back-road winds its way under railway bridges and into the quirky ‘motorbike-friendly’ town of Mooball. If we didn’t already know that, “There’s no udder place like it”, there’s a sign here to remind us. Further on, we spot Wollumbin catching clouds from the car window, a sure sign that TRG is around the next bend.

Housing both the TRG and the Margaret Olley Arts Centre, the gallery’s large utilitarian building is modelled on a packing shed and shows off panoramic vistas of the Tweed River valley and the nearby mountain range from every room. No matter how many times you’ve been here it’s still easy to be distracted by the exterior landscape. Eventually leaving the verandah, we catch exhibitions by recent resident artist Michael Cook, local printmakers, and Resolution: contemporary Indigenous photo-media alongside some of the TRG’s large collection in A – Z: the alphabet in art.

Joining the ranks of other resident artists who have so far included Alex Seton and Monica Rohan, Cook’s Mother series of 13 large, white-framed photographs are squeezed into the two small, dark-painted rooms of the Friends Gallery. While at first the rooms seem to be overloaded with images, after a couple of minutes I have to concede that the unconventional hang complements Cook’s sensitive meditations on his personal identity. In the adjacent Temporary Exhibitions Gallery, Resolution, on tour from the NGA, includes numerous works I’ve not previously seen, including the visually arresting Way of the Ngangkari new media series from Warwick Thornton. Linking contemporary Aboriginal art and popular culture, the work is a product of Thornton’s dual roles of visual artist and film-maker.

After a very brief visit to the Margaret Olley Art Gallery, which never ceases to amaze with its detailed re-creation of the late artist’s Sydney studio complete with thousands of objects, it’s past lunchtime. Discovering that the Gallery café is full, we decide to head home and stop in at Brunswick Heads to eat.

Thirty minutes later we’re driving into Bruns as Bob Dylan comes on the radio with “The times they are a changing”. Gee and I agree we’re glad those changes haven’t so far hit this town. She chooses one of our favourite haunts for a salad, and we eat it watching the local kids jump from the wooden bridge into the river nearby. Back in Byron around 3pm, we drop into the community-run Lone Goat Gallery where an entire show of Lloyd Rees lithographs (the collection of local printmaker, Fred Genis) takes us by surprise. While we’re still wondering how this exhibition has breezed into Byron, Fred wanders in eager to chat with us (and anyone else who’ll listen) about his printmaking collaboration with Rees.

After a long day of viewing, it’s clear we don’t have to board a plane to see good art. It’s also time to obey Byron’s welcome sign: slow down and chill out. We head off for a late swim and a drink! 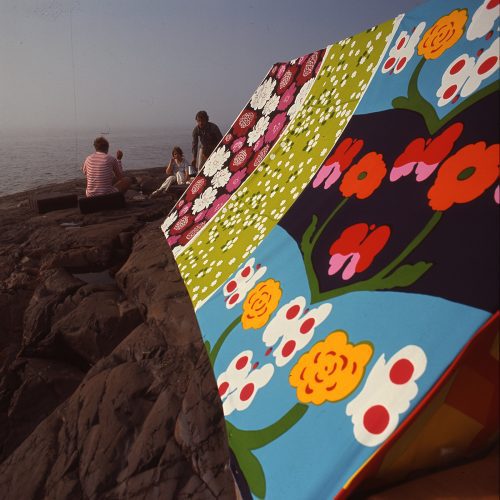 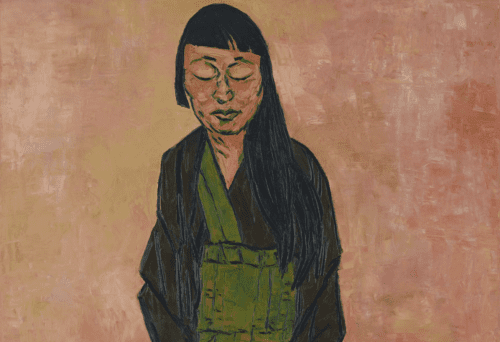 This year, Tony Costa won the Archibald Prize for his portrait of Lindy Lee. The Sulman prize was won by McLean Edwards with The first girl that knocked on his door and Sylvia Ken was awarded the Wynne for Seven Sisters.