Using old letters and photographs, artist Anne Zahalka stitched together the journey her grandmother took in her efforts to survive the Holocaust. She then transformed this personal history into an interactive online documentary, Nobody Loves You More Than Me: Finding Margarete. Writer Briony Downes discusses with Zahalka the emotional impact of her research, and reflects on the symbolic importance of needlework in stories of cultural endurance.

The ties that bind
by Briony Downes

We would not be who we are, without those who have come before us. Growing up as the daughter of a Holocaust survivor, Australian photo-media artist Anne Zahalka knew little about her extended family. Anne’s mother Hedy had arrived in Australia soon after the end of WWII with only a small number of belongings. As a result, very few of Hedy’s possessions connected to her life prior to settling in Australia, a time she also found very difficult to speak about. It wasn’t until after Hedy’s death in 2016 that Anne uncovered a missing link to untold family history, tucked away in a cardboard box.

In the process of packing up her mother’s belongings, Anne unexpectedly discovered a collection of letters addressed to Hedy dating from 1938 – 1941.

She had never seen them before nor heard her mother speak of their existence. Postmarked from Europe, the letters were written in an elegant, long hand script Anne recognised from her mother’s childhood book of recipes. Hedy had carried the recipe book with her as she departed Europe via the Kindertransport in the late 1930s, destined for England. The letters were from her mother, Margarete – Anne’s grandmother.

For Anne, the discovery of Margarete’s letters presented a way to stitch together absent chapters of her history, at a time when her mother’s passing signified an unravelling of sorts. “Finding the letters among my mother’s possessions after her death felt like a gift and I wanted to bring them to light,” she says. “These letters survived the bombing in London, the post-war period in Europe, the fleeing from communism, and their final passage to this shore.” Despite their distance, Hedy had written to her mother every second day over a period of two years. Margarete wrote back daily.

These letters form the basis of the online documentary, Nobody Loves You More Than Me: Finding Margarete. Part of the Untold Australia series produced by SBS, Finding Margarete is an interactive website allowing users to move through a series of letters stitched together by red embroidery thread.

When ‘pulled’ these virtual threads reveal photographs and small collections of archival objects related to the letters.

Writer Charlotte Wood was enlisted to work from translations of Margarete’s correspondence to retell her story for an online platform. “Every project we create is bespoke, we aim to create a new format and a new storytelling method for each work we produce,” SBS Australia commissioning editor Kylie Boltin explains. “Building emotion online is hard but very rewarding. Charlotte was able to take on the difficult task of crafting a contained story from 50 letters and through this she identified a time frame and key locations.”

Once translated, the letters revealed Margarete’s intense heartache at being separated from her teenage daughters. Margarete was desperate to join Hedy and Lore in England, where they had been assigned jobs in domestic service following their arrival on the Kindertransport. Left behind in Europe, Margarete moved from place to place, at first staying with relatives in regional Czechoslovakia, then moving alone to Prague where she was eventually deported to Poland’s Lodz Ghetto, surviving there for three years until her transportation to Auschwitz in 1944. It is believed Margarete died at Auschwitz just months before its liberation.

Like Margarete, Henryk was a resident of Lodz Ghetto and was tasked with taking identity photographs and images for Nazi promotional material from within the ghetto confines. Secretly salvaging film, Henryk captured thousands of images documenting life inside Lodz. Shortly before the end of the war, Henryk buried his photographs and negatives in a box on the Lodz grounds. In 1945 he was able to retrieve over 6000 of them and in Finding Margarete, Henryk’s images of Lodz provide a harrowing real-life context for Margarete’s letters.

Red embroidery thread features throughout the design and layout of Finding Margarete. Handsewn by Maricor/Maricar, a Sydney-based design duo who view their needlework as “painting with thread,” embroidered chapter headings and design motifs direct the course of interaction and also reference the symbolism of thread as a link between people across time. Boltin elaborates, “The idea of using thread to ‘unravel’ the politics of the story enabled us to intersect the personal and political. It gave us a vehicle to introduce the wider story of the period – the Holocaust, the Nazi invasion and the Henryk Ross images – without losing the deeply intimate story between Anne and her grandmother.”

Connecting to the symbolism of Maricor/Maricar’s embroidery, knitting and sewing were activities regularly engaged in by Margarete and her letters speak of jumpers and cardigans she sent to her daughters to keep them warm in England.

This makes me think of my own small collection of Latvian needlecrafts decorated with cross-stitched solar emblems of Saule and the star of Auseklis. My Latvian grandparents and their friends, most of whom arrived in Australia as Eastern European displaced persons in the 1950s, would display these handstitched motifs across domestic furnishings. In every Latvian home we would visit, they were proudly sewn onto pillows, embroidered sashes and blankets as an emblematic link to cultural and familial identity.

The embroidered design of Finding Margarete also highlights the importance of needlework as a mindful activity in times of trauma and how it must have provided a way to feel connected to culture and family, particularly during wartime periods when individuals were often stripped of their personal history. Anne discovered this was true for Margarete as she describes her grandmother as “a great knitter who used to occupy herself with knitting during times of loneliness and anxiety.” She continues, “I have some linen and lace saved by relatives and later sent to my mother and aunt that has now been handed down to me. Knowing that my grandmother held these in her hands and now they are in mine, brings me great joy and pride.”

While Anne has been a practicing photographer since the early 1980s, very few of her own images are included in Finding Margarete.

The visuals focus instead on the work of Henryk Ross and Maricor/Maricar. Anne describes undertaking research for Finding Margarete as “an emotional and painful process,” inevitably requiring her to step away from her camera to turn the focus inward. She goes on to say, “Learning of the love Margarete bestows on her daughters, the loss she feels after their separation and that her fear and concern for them is palpable, even while her own life was being reduced immeasurably: knowing more about the horrendous conditions of the ghetto and that she survived such punishing conditions was a testament of her strength. It is unimaginable to think she was never able to receive or send another letter to her girls during this time.”

As difficult as the research process for Finding Margarete was, at its conclusion Anne found a measure of comfort. “Being able to share her story and have so many others be moved and touched by it has been somehow healing,” she says. As time passes, the memory of Margarete and Hedy lives on within a new generation as Anne’s own daughter continues the traditions of her heritage. “My daughter shares multicultural stories at school and wears an embroidered Czech folk costume while preparing her favourite matzah dumpling soup from a recipe my mother taught her,” says Anne. “These heirlooms are a tangible way of remembering and honouring those loved and lost.”

Anne Zahalka’s Nobody Loves You More Than Me: Finding Margarete can be found online at SBS, and her work will also feature in the two-person show, The Fate of Things – Memory Objects and Art, at the Sydney Jewish Museum.

Please note: A correction was made on 10 October 2018 to correct a factual error in stating that Margarete survived the Holocaust, sadly it is believed Margarete died at Auschwitz.

Nobody Loves You More Than Me: Finding Margarete
Anne Zahalka and Charlotte Wood
https://www.sbs.com.au/margarete/ 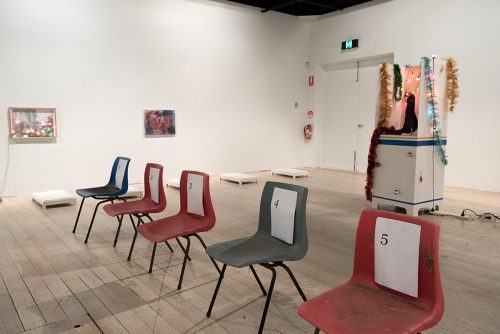 “Years later I was walking down the street and I was hit by a wave of that pungent smell that explodes out the back of the garbage truck as it compacts the trash. As aromas of dogshit and grass clippings filtered through me I felt incredibly warm and got goosebumps.” 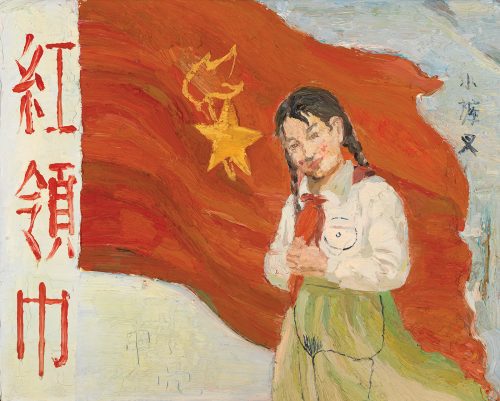 White Rabbit Gallery has pulled off a neat trick. As the Sydney-based institution celebrates its 10th anniversary, it manages to feel both venerable and fresh.