From nifty showbags and long queues to poignant existential gloom, artist and writer Tai Snaith reports on the highs and lows of the Venice Biennale.

It has taken me a while, but this year I finally made the pilgrimage to Venice to see La Biennale di Venezia, the 57th International Art Exhibition, or as us brutes in Oz fondly refer to it, ‘The Bee-en-arr-lay.’

I refer to it as a pilgrimage perhaps because my mind is influenced by all the faith-based frescos I have processed over the past week, as we continued on from Venice to visit Rome, where the power of religion is hard to ignore.

Actually, it is also relevant to my thoughts on the Venice Biennale. The new dominant religion, or maybe I should say ‘cult of art tourism’ (or capitalism), was almost impossible to avoid. Photo-bombing my thoughts from every angle was a series of enormous billboards for the new Damien Hirst piggyback extravaganza of Treasures from the Wreck of the Unbelievable, or “giant trinkets for very rich people” (as my partner dubbed it) on at Palazzo Grassi. With grander signage than the Biennale itself, any unsuspecting tourist may have thought that it was the main art event in town. Don’t ask me what it was like, because I ran out of time to see it (or subconsciously chose not to pay the richest artist in the world 20 Euro to form an opinion). Then again, I guess Venice has always been about trade, so maybe this is just the logical conclusion in this day and age.

Instead, I joined the dedicated throngs of art lovers, celebrities, princes, princesses, journalists and assorted over-dressed, über rich people from around the world to see what the Biennale offered us in terms of enlightenment. This year the theme was Viva Arte Viva which supposedly meant something along the lines of ‘Long Live Art.’ Or as the director and curator of the Biennale Christine Macel said herself, “Viva Arte Viva is an exclamation, a passionate outcry for art and the state of the artist. Viva Arte Viva is a Biennale designed with artists, by artists and for artists.” It sounded a bit to me like a kind of salute, hail to a leader or dare I say it, propaganda slogan. I’m told by regulars that none of the national pavilions pay any attention to the theme anyway.

We got through the initial queues to enter the Giardini just in time to squeeze in to a crowd (mainly Aussies) gathered at the Australian Pavilion to launch Tracey Moffatt’s My Horizon, curated by Natalie King (and assistant curator Hannah Presley) and commissioned by Naomi Milgrom. I spotted a few familiar faces in the mainly black-clad crowd: arts workers Anna and Morrie Schwartz, Max Delaney, Mark Feary, Robert Buckingham and a handful of artists including Sally Smart, Kate Daw, Salote Tawale, Anna McMahon and Emile Zile. Even soprano Deborah Cheetham was there to ease us in the doors with her sweet serenade. Luckily there was a spot for a big video screen on the outside of the new(ish) black box designed by Denton Corker Marshall, because otherwise we could have been entering Darth Vader’s money box for all I knew.

It was kind of nice to be part of ‘The Press,’ because firstly, they give you a showbag and the tote bags this year were pretty cool. They were black and one side read “INDIGENOUS RIGHTS” in yellow caps and the other side “REFUGEE RIGHTS” in red. But strangely enough, they were all turned inside-out when they were first handed out, showing only black. Not sure whether this was a mistake or a provocation or both.

My Horizon was dark inside too. Moodily low-lit, the highlight for me was a new two-minute long video work called Vigil, exhibited on a screen set in to the wall, with rounded edges like an old TV set. When asked about this work and its relation to her exhibition title, Moffatt stated, “People set out to go beyond the horizon, to make journeys. On our horizon we also see what is coming in. We either react or we don’t react.” I found most of what she said intriguingly vague and non-committal to any political position.

The piece itself is a montage of found footage, in her ironic style (almost comedic as one German journalist noted). It switches and cuts from familiar Hollywood faces such as Elizabeth Taylor, Kathleen Turner, Julie Christie, Donald Sutherland, who are all shown to be looking out of windows and then expressing faces of horror, surprise, even disgust. These faces are interspersed with a familiar news image of a boat full of refugees arriving, altered to make it look blurry and flattened. When asked why she made it look this way Moffatt responded, “I had to change the images around a little bit to make them look like they weren’t off the Internet. Honestly, I am probably going to get sued by Fairfax.” I do love this about Tracey Moffatt, she’s a rebel.

After days of drinking Spritz, eating pasta and pondering the power hierarchies in art, I have to say that I agree with the Golden Lion jury. The German pavilion represented by young dancer-turned-‘painter’ Anne Imhof was by far the stand-out experience for me too.

After hearing from my German curator friend Leonie Pfennig that the queues might be bad, we arrived well before the gates opened and still queued for over an hour to get in. The whole time we were queuing we were looking at these two Doberman dogs that had been installed behind a huge security fence surrounding the whole pavilion as part of the work. They prowled up and back and barked at anyone who tried to hold their phones up to the wire to photograph them.

The psychology of the piece (and the queue) had gotten to us even before we entered. As we ascended the temporary metal steps (as if going in to some kind of club) we were greeted by pale, dude-like youths wearing caps and ironically cool leisure wear and knee-pads with slightly greasy hair, eyes trained diligently on their phone screens rather than us, giving off an a overall air of ‘sporty doom.’

When we finally entered in a gush of other flustered art-faithfuls, we realised we were all walking on a glass floor.

The new floor was installed about 1.5 metres above the actual pavilion floor, throughout the whole space, giving an inescapable feeling of unease and fragility.

Then we realised there were more of the doomed folk down there, literally underneath us.

They mainly just lounged around looking depressed and despondent, like they had nothing to live for except being trapped in a hot young artist’s installation. But every now and then there would be a flurry of activity and those below would scatter on their hands and knees, almost like apes, and crawl into another room where they would once again loll and look depressed, sometimes interacting with one of the obtuse props scattered around the minimalist interior. The crowd would diligently follow above the glass, as if magnetised, with their phones out so as not to miss the action. Sometimes the performers made eye contact with a person/phone in the audience and communicated a kind of look that said, “Don’t you have something better to be looking at?”

The work was undeniably about power. About the hierarchy and structures that surround ‘High Art’ and culture. It made me think about the unspoken hierarchy and chain of command and the intrinsic problems associated with being an artist/viewer/collector or a person in a position of control. The work made a powerful comment on the way that we enslave ourselves and our bodies to a system (and essentially to capitalism itself) through social media. And often, by doing so we propel and accelerate the hype around art as kind of high-end lifestyle (which in truth it is anything but).

The work is not beautiful in a traditional sense. You can’t buy it and hang it on your wall. But good art is often hard to look at, in my opinion, and important art is very much a reflection of its time. I couldn’t help but liken the performers to animals in a zoo and draw parallels between the way we see artists as a kind of rare beast to be worshipped before they fade away, from depression or starvation or both, their work photographed while they are never paid properly themselves. I left the pavilion feeling slightly sick to my stomach and my partner and I agreed, “That was what we came for.” 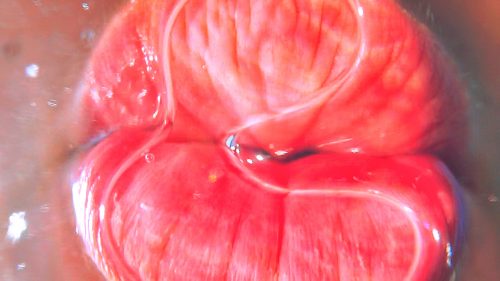 Pipilotti Rist sets a surreal scene for Australian audiences in Sip my Ocean. 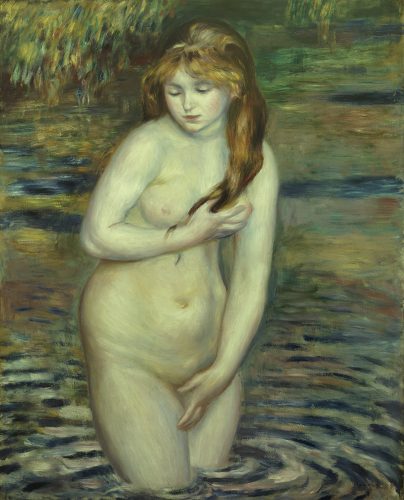 On the Origin of Art