Public Art Melbourne’s Biennial Lab has commissioned eight artists (Hiromi Tango; Kiron Robinson; Steven Rhall; Sanné Mestrom and Jamie Hall from The Mechanic’s Institute; Isobel Knowles and Van Sowerwine; Jason Maling and Martyn Coutts from Field Theory; Will Foster and Gabrielle de Vietri from A Centre for Everything; and Timothy Moore from SIBLING) in the development of new work that connects deeply with the site, history, and the future of the Queen Victoria Market.

Last week, artists Van Sowerwine and Isobel Knowles gave us an insight into their initial preparations, research and planning in the development of their work for the Lab.  This week, they discuss the making of Out in the Open.

Van Sowerwine and Isobel Knowles: For the past six weeks, as part of Public Art Melbourne’s Biennial Lab, we’ve been model making, set building and filming animation in a studio at the Queen Victoria Market. It’s been wonderful working so close to our subject matter and getting to know some of the people who make the market such a special and unique place. The conversations that we have each day trickle into our story as we film it; changing it, cementing it and growing our connection to the site every day.

We began our working process with conversations about the story, taking turns writing and editing the script, both separately and together. As soon as we had a basic story we began the model making. Usually we would ensure the script and storyboard would be completely locked down before any other work begins, to make sure no work is done unnecessarily. The tight timeline for this project meant that we had to work simultaneously on the creation of the puppets, props and models as soon as they were securely in the story.

We began by sculpting George, our main character. We were able to use an existing puppet from a previous animation and sculpted a new head and hands for him.

Fiona Edwards, a specialist caster and molder, fabricated our puppet character. She took our sculpted hands and head and cast them from silicon. First she created tiny armatures, twisting fine wire for movable fingers, laying them into molds, before pouring their silicon skin on top of them. As it can be difficult to avoid bubbles and tricky to get the wire to sit exactly right, she had to make many pairs of hands to get two pairs of good ones. (We always need spares in case the fine finger wire snaps!)

To make the miniature fruit boxes we took photos of real fruit boxes, printed them in a tiny format and glued them to thin cardboard. The model fruit in the boxes is made from polymer clay. 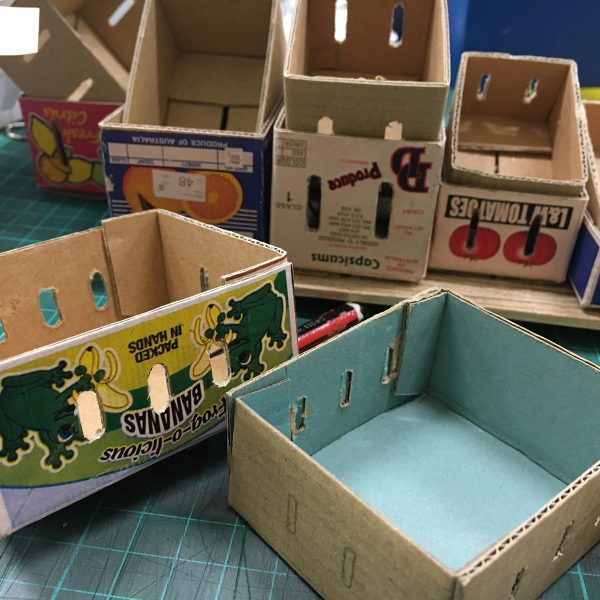 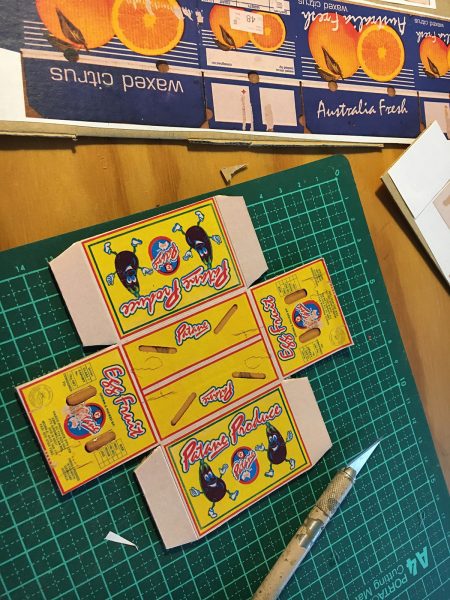 Madeleine Griffith, a model maker, built the market set and cemetery wall for us. She used some great model making tricks to make the market look realistic. For example, sand, paint and glue make great asphalt. The wall is carved from polystyrene, painted to match the cemetery wall in F shed. The concrete bases are made from plaster and the posts and trusses are all made from Tasmanian oak rods. The ceiling is silver card with grey lines ruled onto it and we used a Posca chalk pen to outline the lines of the carpark.

The set itself sits upon a custom workbench made for us by Wade Lovich. It’s very large – approximately 1/7th in scale so it measures about 2.4 x 1.2 metres in total. This makes getting into the centre of it a challenge. It has removable panels so we can sit inside it to animate the character. We were lucky to be able to use the biennial lab space at the market for our shoot, a space that’s big enough to put the set inside, with enough room around the outside for camera and lights. We use giant rolls of paper to block out the real room in the background.

To animate, we use a digital still camera plugged into a computer that takes photos as we move the character, allowing us to watch it back on a large screen as we go. On a good day we can shoot between 10-15 seconds of animation. As we’re making a seven minute film for the Biennial Lab, with only 4 weeks to shoot, our timeline is tight.

When we’ve finished animating we’ll need to edit the film and hand it over to our sound design team to create an immersive soundtrack. The film will be shown in A shed at the Queen Victoria Market, inside an installation made from silver boxes. Byron Scullin and Camilla Hannan, the sound designers, will use transducer speakers to bring the boxes to life. We’re very excited to see it all come together and to present the film at the market.

The Public Art Melbourne Biennial Lab will run from 17 – 23 October.

Below is the preview trailer of Out in the Open by Isobel Knowles and Van Sowerwine.
Knowles and Sowerwine will be running two interactive programs in conjunction with The Public Art Melbourne Biennial Lab, a walking tour on Thursday 20 October 12.30 – 1.30pm and a model-making workshop on 23 October 11 – 12pm. 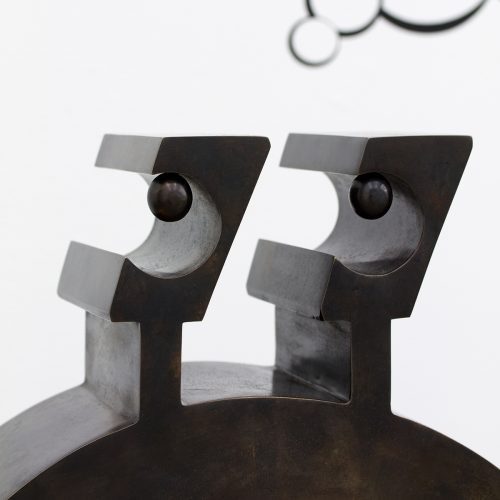 Floyd translates politics and philosophy through a cast of anthropomorphic sculptures.

“After being butchered, a body can never have its wholeness back,” recites Mombaça from “The Enciphered Letters to Castiel Vitorino Brasileiro”, a tribute to a young Brazilian black trans artist whose work Mombaça finds powerful.