Public art in Melbourne is about to get a bit of a shake up with the launch of the inaugural Biennial Lab. Titled What happens now? this pertinent question is lifted from one of US artist Jenny Holzer’s Inflammatory Essays, a series of posters pasted up around New York City in 1979, remaining as relevant today as ever.

Public Art Melbourne’s Biennial Lab has commissioned eight artists (Hiromi Tango; Kiron Robinson; Steven Rhall; Sanné Mestrom and Jamie Hall from The Mechanic’s Institute; Isobel Knowles and Van Sowerwine; Jason Maling and Martyn Coutts from Field Theory; Will Foster and Gabrielle de Vietri from A Centre for Everything; and Timothy Moore from SIBLING) in the development of new work that connects deeply with site, history, and with the future. Chiefly curated by Natalie King—curator for the next Australian Pavilion at the Venice Biennale—artists were chosen for their capacity to rethink a site, to engage with and beyond its complex histories. The site itself, the Queen Victoria Market, connects people not only through trade, but also through custom, relationships, and through shared, diverse, and often contested histories. It’s a loaded site which has been a gathering place for the clans of the Kulin Nation, then post-settlement, as a place of mourning, and from 1878, as a conglomeration of Melbourne’s market traders.

In June this year, the artists came together to participate in an on-site program led by Claire Doherty (the founder of Bristol-based arts organization Situations —an organisation that puts particular weight on the complexities of place when engaging with artists), Deakin’s Professor David Cross, whose background lays in the presentation of innovative and often temporary, public art, and chief curator, Natalie King. Throughout the lab process, artists focused on different topics relating to both art in public space and to the Queen Victoria Market. They re-evaluated their practice and proposed works by learning the pre-colonial history, concepts around psycho-geography (an approach to geography that emphasizes playfulness and discovering urban environments), performativity, temporality and exchange. The artists also met with a different market trader on each day of the lab so as to really dig deep into its heartbeat. It was this process that was seen as the utmost importance to the project, in encouraging a sincere connection with site, with Melbourne history and the people that inhabit the space.

The projects themselves may be temporary, but it’s hoped the encounter will last. The Lab process has encouraged artists to make an impact and that’s not to say that things will be sensationalist. In fact, many of the Melbourne Principles: New Rules for Public Art (a set of principles developed by the artists involved) have a subtext that reads that they’re not there to sensationalise at all. Rather, that they’re there to form relationships with the public, and allow people to similarly dream new possibilities.

For public art to truly engage with the public, it needs the public to want to engage with it. Biennial Lab is aiming to build these relationships, while recognising the respect that it must make for other people and for the histories of our public (or not-so public) spaces. Most importantly, it’s shown courage in entrusting artists with a capacity to build and foster communities beyond the white cube, and hopefully, those communities will continue to engage with both art and public space in more meaningful ways.

Behind the scenes: Artists Isobel Knowles and Van Sowerwine talk about their involvement with the Biennial Lab.

We had many moving encounters at the Queen Victoria market as part of the Public Art Melbourne Biennial Lab and two of these encounters in particular resonated with us.

On the first day of the lab we were introduced to Danny who runs a box hire company for traders to store their wares in when the market isn’t open. These silver boxes are unique to the Queen Victoria Market. They’re customised for every trader and are constantly moving around the market as the traders are required to relocate every day of the week. We were drawn to these boxes and immediately started searching for ways we could work with them. Our first thoughts were to animate objects.  While much of our recent work has involved animating paper characters, the market inspired us to return to making miniature objects and we began looking at the idea of animating miniature produce from the market.

Our initial tests looked beautiful but the work didn’t quite feel resolved. Several weeks later we met with another trader, Peter, who uses a silver box to store the kitchen wares he sells. We bought a mortar and pestle from Peter, who has been working at the market since 1958, and he began to talk to us about his experiences. Like so many of the traders we talked to, he loves the market, and is worried about its future.

Conversations with Peter inspired us to write a screenplay based around being a trader at the market. We researched further and talked to other traders about their experiences at the market, most of who have been there for twenty years or more. What brought them here? What keeps them coming back? What do they love, and what are the challenges of working at the market?

From these stories we began developing a fictional script based around a single character. Our plan is that it will be animated using puppets and installed at the market. Out In The Open will premiere in October at the Queen Victoria Market alongside other works as part of the Public Art Melbourne Biennial Lab. 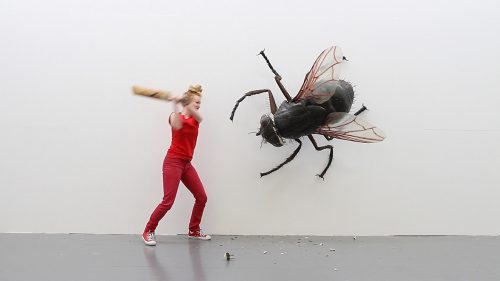 Tracey Clement chatted to Nell about AC/DC, spirituality and death while the artist was installing her major survey show at the Shepparton Art Museum (SAM). 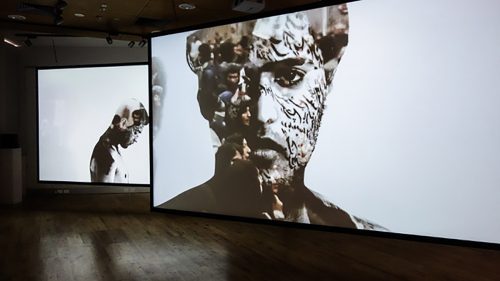