Musician and performance artist Rainbow Chan sends a postcard from Beijing where she spent a month in the Chinese autumn of 2018 as one of four Australian artists selected by 4A Centre for Contemporary Asian Art.

It was in the early hours of the morning when we arrived in Huairou, a sleepy town located in northern Beijing, some 50 kilometres from the city centre, famous for its chestnuts. Unfurling our disoriented bodies from a metallic blue van, we shuffled towards an impressive concrete building, which looked like it had been plucked out of an Escher drawing. I spotted the porthole windows which have become emblematic of the 4A Beijing Studio Program, a month-long residency launched by 4A Centre for Contemporary Asian Art, hosted by Chinese-Australian artist Shen Shaomin. This year’s residents were Dean Cross, Andrew Liversidge, JD Reforma and myself.

A friendly golden retriever named 蛋黄 Dànhuáng or “egg yolk” led us into the house and trotted about as we stared in awe at Shen’s personal art collection. Large drooping oil paintings of Chairman Mao, hyper-realistic nude sculptures, animal bones reconstructed into fantastic beasts. The studio was a dramatic space, perfectly catered for thinking, creating and entertaining. 4A’s wonderful assistant curator Micheal Do soon introduced us to Mr. Shen—a cryptic but warm man who often sported tracksuits, leather jackets and John Lennon sunglasses. After settling us in, Shen explained that the residency was not about making work, but about living. Art and life are two sides of the same coin. The aim was to spend the month truly understanding the local surroundings and only after we leave, Shen suggested, would the most meaningful works emerge.

With that in mind, the four of us navigated the magical chaos of Beijing with its syrupy accent, congested roads and sporadic opening hours. I spent my time juggling the residency, a few club gigs, a solo exhibition, Gloss, at I: project space (a non-commercial gallery hidden in a hutong neighbourhood), and trying to live “like a local.”

The latter has always been complicated for me as I am a Hong Kong-born, Sydney-raised person, with varying degrees of emotional attachment to my Chinese ancestry. Like many migrant children, I feel an expectation to prove my authenticity in the “motherland.” This was, however, my third time in China and I had become accustomed to being asked “Where are you from?” With some Mandarin under my belt, I turned those conversations into productive ones. In fact, most of my interlocutors were also not Beijing natives, which makes sense, considering the city is home to millions of migrant workers. Under persistent grey skies that mysteriously cleared up during public holidays, it became impossible not to think about factories, labour and the socio-economic entanglements that lie behind every “Made in China” label.

While life continued as per usual outside China’s great firewall, life inside the residency was vibrant. Three times a day, we gathered to share a north-eastern homestyle meal, prepared by Shen’s brother-in-law, Mr. Wong, who not only drove us everywhere, but kept us up-to-date with the trendiest (and scariest) WeChat viral videos, ranging from fluffy animals to car crashes. Most of this footage had been caught on the ubiquitous street cameras, affectionately referred to as “men’s underwear” because of their trunk-like shape. Around the dining table, we’d discuss anything from China’s social credit system to the best beauty filter on Meitu, China’s favourite selfie app. We toasted to health and happiness with numerous shots of 白酒 báijiǔ, an extremely alcoholic spirit that tastes like fire and water at once. Poets, musicians, curators, artists and family members flowed in and out of the studio, most of whose names I’ve forgotten but live on as QR codes in my phone.

We participated in artist forums where we presented our practices to local Chinese artists. I learned about a Jiangsu-born artist named Dong Jinling, who shared with us personal stories which revolved around death and trauma. Her videos powerfully critiqued the violence that exists at every level of the social system, be it the patriarchy or overt political oppression. The forums were always followed by Mr. Wong’s home cooked feasts and more báijiǔ. One evening, someone read out an update from Fan Bingbing’s Weibo account. Bingbing, China’s top actress, had disappeared several months before, only to re-emerge from her luxurious house arrest with an official apology for tax evasion. While Bingbing remained fairly unscathed with a fine of 883 million yuan, I thought about the pile of drying corn husks next door, parched by the sun.

Apart from being fed extremely well, we were taken to several landmarks including the Great Wall, Tiananmen Square, and Beijing’s largest art district, Songzhuang Art Colony, home to more than 5000 artists. If there was one thing that China excelled at, it was scale. I was blown away by the quantity of works, all crammed into newly constructed pavilions like seafood in restaurant fish tanks. My favourite area was 798 Art Zone, an old decommissioned military factory complex. Although on the commercial side of things, I found their curatorship to be strongest. Ullens Centre for Contemporary Art hosted an incredible Xu Bing retrospective, whilst the Faurschou Foundation showed emerging voices such as Asian Dope Boys, a club collective whose performances have been described as “freak opera,” and Sun Xun, an artist known for his experimental ink animations. Xun invited us to his studio where he and his assistants toiled away on new commissions. Clearly an avid collector of objects, Xun talked about his fascination with military artefacts and made sure our tea cups were never dry.

On our way out, I noticed several bottles of pencil stub ends to commemorate the effort which goes into those 24 frames per second.

The highlight of the residency for me was our Saturday trips to Shunyi markets, accompanied by Shen’s daughter Veronica and our translator, Mengmeng. The markets sold everything under the sun including the best fried chicken imaginable, antiques, medicinal goods, plastic gadgets, cheap electronics, and knock-off designer brands. Never have I seen so many variations of New Balance: New Barlun, New Philbelenca, New Bunren, NEW BOOM.

I was in counterfeit heaven! For the last two years, I’ve studied the phenomenon of 山寨 shānzhài, China’s copycat culture. While I’ve mostly looked at circulated images of counterfeits, the real things—in all their fake glory—lay tangibly before me. I bought a bejewelled Chanel dress adorned with interlocking circles instead of C’s, rip-off Air Jordans called Qiaodan (a transliteration of Jordan in Mandarin), and some fake Balenciaga sneakers labelled Falbnoiaga. When I paid in cash, a stallholder commented on how long it had been since she had seen physical notes. Even the old grannies around me were paying for spring onions in WeChat dollars on their smartphones.

At that moment, I thought about the data that floated invisibly around us, more readily available than clean air.

On our final day, we sat around the dining table in a daze. It was as if we’d been living in a parallel time. Shen was right. I was feeling the inertia of my month of information overload, but glad to have spent my time living. As a parting gift to Shen, we each added to his ongoing project, I am the result of myself. On his death, Shen will donate his corneas to a visually-impaired person, who is contracted to repeat this process, thus carrying on Shen’s vision indefinitely. In addition, Shen has been collecting artists’ proposals over the last few years which detail ways to utilise the rest of his body. I wrote on my piece of paper: “Mr. Shen, when you die, someone will string your bones together to make a windchime so when the earth breathes, it will sing your name.” As we said our goodbyes, the autumn wind began to usher in change. 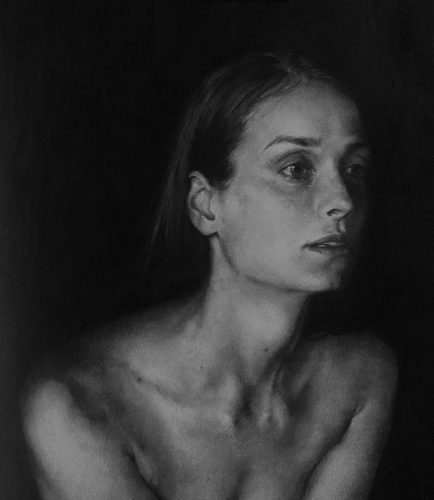 NSW-based artist and theatre designer Antoinette Barbouttis has won the Black Swan Prize for Portraiture with a large charcoal drawing. 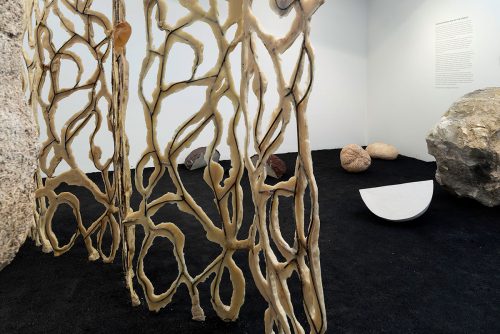 In Gaia not the Goddess, an installation of sculptural objects packed tightly into the project space at Heide Museum, Isadora Vaughan continues her exploration of materials creating a speculative environment.