Lawyer and art historian Adam Bushby discusses the challenges an artist faces when painting judges and lawyers; a niche in the portraiture genre subject to multiple constraints.

Facing the law
by Adam Bushby

Tall poppy syndrome is said to be an essential characteristic of Australian culture. We are wary of elitism and excessive displays of individualism because we wish to maintain an egalitarian society. And yet we remain enthralled by a cult of the individual, namely the everyday person who does extraordinary things: the sporting hero, the underdog, the battler. Lawyers, on the other hand, occupy an ambivalent position at best.

Although most people find occasion to call upon lawyers for representation and help, lawyers are frequently regarded with suspicion.

While lawyers generally enjoy high social status they are often stigmatised through perceptions of dishonesty or avarice. This poses a dilemma for artists depicting a lawyer in visual form, and for the ongoing reception of these images. Is it possible to portray a lawyer with gravitas while at the same time encouraging a more sympathetic viewer? Or should an artist be less concerned with a sitter’s professional identity than with their individual character?

I work as a lawyer, but I also assist the Victorian Bar with its collection of portrait paintings. While the collection has only been displayed publicly for a few years, many other collections of respected or otherwise important individuals (mostly men) can be found across the country in parliament buildings, libraries and boardrooms. As these collections continue to grow through the accretion of new commissions and acquisitions, it is worth considering the role of such portraits today and, in particular, how legal portraiture effects, if not constructs, legal identity.

Most portraits of lawyers depict the subject either in traditional legal dress, such as that worn by barristers and judges, or in non-traditional civilian dress.

This distinction, perhaps more than anything else, informs our interpretation of legal portraits. In Jiawei Shen’s portrait of Tom Hughes QC, for example, the artist pays careful attention to the formal dress of a barrister, consisting of a wig, robe, bar jacket and jabot. (As an aside, some say the experience of counsel can be gauged by the state of their wig; the older and more tattered the wig, the better the barrister.) Against an indeterminate background, Hughes seems to speak and gesture to an unseen courtroom, perhaps taking point with an interlocutor or ‘learned friend’.

Whereas the likeness of a subject, conveyed mainly through facial features and expression, is not necessarily dependent on clothing or accessories, the representation of identity most certainly is. To be depicted in the formal dress of a profession is to declare a person’s membership of, and participation in, that profession, and to potentially subsume that person’s identity into the profession itself. Despite his steadfast countenance and beautifully textured hands, Hughes remains ‘cloaked’ in the symbols of the legal profession.

Successful barristers typically become judges, meaning there is a close relationship between the Bar and the ‘Bench.’ Archibald Colquhoun’s grand portrait of barrister turned Chief Justice of the High Court of Australia Owen Dixon is nothing short of arresting. Dixon wears the now superseded ceremonial dress of the jurisdiction, characterised by a full-bottomed wig. He also stands in a private setting, probably his chambers, alluding to the thoughtfulness and contemplation required of a judge. Colquhoun’s composition is quite ambitious. Full-length portraits are typically reserved for highly significant people, while the chinoiserie vase in the corner could be an attempt to emulate the great portrait painter John Singer Sargent. The artist also shows flashes of bravura brushwork that loosen the strict tonalism preached by his teacher Max Meldrum.

The art historian Shearer West writes in her 2004 book Portraiture, that “portraits can be placed on a continuum between the specificity of likeness and the generality of type, showing specific and distinctive aspects of the sitter, as well as the more generic qualities valued in the sitter’s social milieu.” The traditional legal dress depicted in the Hughes and Dixon portraits means that the general impression of each image is less concerned with specific likeness than with general type. Portraits of lawyers in traditional legal dress are, however, becoming less common. One simple reason is that wigs and gowns are gradually disappearing from Australian courtrooms, the general trend being towards reserving formal dress for serious criminal matters only.

How then might a legal portrait be interpreted where the subject is depicted without any obvious symbols of the legal profession?

A portrait of barrister turned judge Charles Lowe by the often brilliant Judy Cassab is instructive. At first glance, artist and sitter appear well-suited; dark colours and strong brush strokes suggest an intellectual, perhaps introspective personality deep in thought, possibly regarding the artist with suspicion. In addition to these expressionistic elements, the artist cleverly uses bookshelves in the background, not just to point to scholarly themes, but to incorporate elements of visual abstraction. For the Lowe portrait, likeness is more concerned with depicting the internal world of the sitter’s character, the kaleidoscopic colours perhaps representing his thoughts.

Lowe is also seated, like so many other legal portraits. This entrenched pictorial convention is a distinct pose or gesture. It is largely practical, but a seated pose may also be interpreted as an expression of authority. Rulers have often been depicted as enthroned. It is for this reason that religious images of the Virgin Mary called ‘majesty’ or maesta depict her seated, often elevated and sometimes larger than surrounding figures. Yvonne East’s imposing portrait of current Chief Justice of the High Court Susan Kiefel, a worthy finalist in the 2018 Archibald Prize, speaks directly to this tradition. Despite the sitter’s kind expression, this portrait is an expression of authority. There is, I think, a curious pluralism in a judge being seated for the purposes of a portrait. Sitting is comfortable, yes, but in doing so the judge necessarily adopts the pose of their office, being seated in order to carry out judgement.

Former barrister and judge of the Supreme Court of Victoria, Betty King QC, has sat for a portrait four times. Two portraits depict her in the role of a judge, while the other two as a ‘celebrity’ who gained notoriety by presiding over Melbourne’s gangland trials. King greatly enjoyed working with each artist, but believes the portrait by Raelene Sharp “shows a bit of the steel required to be a Judge and also some of the individuality that was me.” In other words, a deft combination or confluence of type and individual.

Despite King’s openness to sit for portraits, a challenge for both artists and the legal profession must surely be the understandable reluctance of lawyers to be depicted in non-traditional modes. I can assure you that lawyers are, on the whole, conservative. The Doug Moran National Portrait Prize held in Sydney and the BP Portrait Award in London are just two examples which demonstrate the sheer breadth of contemporary practice: portraiture often merges with genre and other forms of figurative painting. It is this adaptation that keeps portraiture contemporary and interesting.

Many members of the legal profession make a significant contribution to public life in Australia. The profession is also changing, and this should continue to be promoted and shared with the general public. The phasing out of wigs and robes is a clear sign of change. It also provides the perfect opportunity for legal identity to be redefined by lawyers as well as the artists commissioned to portray them. 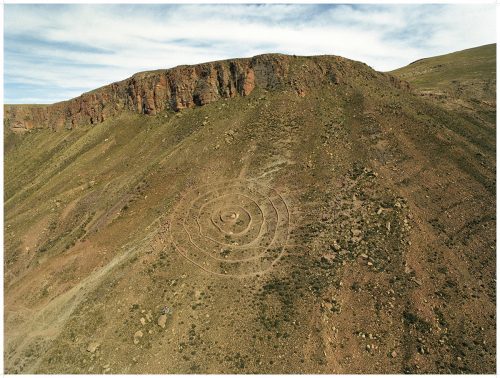 Unbeknownst to many, Australian artist Andrew Rogers is leaving an immense mark across the world.

Sounds of Pacing places early-career artists in lively conversation with each other.