There is more to food than gourmet dining and celebrity chefs. Rebecca Shanahan examines the dark side of our attitudes to food and looks at artists who take on the meaty topic of food security.

There’s something late-Roman Empire about our current obsession with food and cooking as a hobby. People compete on TV to create the most decadent dish. Oscar Wilde called fox hunting by the English upper classes “The unspeakable in pursuit of the inedible.” But this quote seems irresistibly apt in this context too. A celebrity chef-cum-extreme-diet-crusader dispenses nutritional advice to the public with a distinct surfeit of heavy criticism, because…clicks. Flagging sales in whatever? Flog a cookbook. Go to a restaurant and it’s ok to stand on your chair and take a picture of your meal. In fact, they want you to. Seriously.

Meanwhile, a generation of homesick uni students who never learned to cook are eating themselves into a super-sized early grave, thanks partly to the beckoning shelves of hyper-palatable packaged snacks and instant noodles that are simultaneously energy-dense and nutritionally barren. (Quite a feat, that.)

But out beyond our cities things are even more serious. We’ve got a real growing problem: food security. Food security means having reliable access to a sufficient quantity of affordable, nutritious food. While concern about food security is nothing new and the causes of food insecurity are many, from natural disasters to lack of market regulation, climate change is now affecting food security in two ways. We are recognising that our default use of jet fuel to transport food far from where it is grown to feed people is unsustainable, and climate change is demanding a profound reassessment of what we can grow where.

Some of the best soils in Australia are under real threat from the ‘Coal is Good’ ostrich-folk. The remaining arable parts of the Sydney basin are fast becoming suburban housing instead of lush market gardens growing in soil enriched by generations of compost. We can no longer be sure of feeding ourselves in the future. And our surreal disconnect between the supply of food and its consumption (we no longer grow our own stuff or even know where our food comes from) isn’t helping.

Despite this, mass media in developed countries seems to think that food is about pleasure and entertainment. A lifestyle choice. But for some artists, food is both a cultural and a political issue. I explore these issues in my own work, and food security also appears implicitly and explicitly in works by Australian artists Diego Bonetto, Jonathan Jones, Emily Kame Kngwarreye and Julia and Ken Yonetani.

Emily Kame Kngwarreye (1910-1996) knew all about the importance of food. The artist was from Alhalkere in the Western Desert, and many of her great works, painted at the end of her life, are related to her principle Dreaming, the anwerlarr or pencil yam. Still an important bush tucker source, pencil yam has a reputation for not being especially easy to locate. Kngwarreye’s tacit knowledge of this plant and its central importance to her identity, culture and place help to imbue her yam paintings with extraordinary metaphoric richness and depth.

Some of these, such as Anwerlarr Angerr (Big Yam) from 1996 and Anwerlarr Anganenty (Big Yam Dreaming) from 1995, use a single, meandering line. These lines seem simultaneously to map the artist’s country and represent the growth patterns of the plant and the cracks in the earth it creates when ready to eat. These continuous single marks occupying the entire field of the canvas operate also as a poetic assertion of life, an endlessly varied mark-making device that pulsates with the artist’s bold late-career energy and her holistic sense of land and self. The works are a self-portrait (Kngwarreye’s middle name Kam or Kame means ‘yam’ in her language) merged with a near-celestial depiction of the artist’s landscape and her cultural locus.

Julia and Ken Yonetani’s work also operates on a metaphoric level integrating landscape and culture. Their epic nine-metre long The Last Supper, 2014, is moulded from salt extracted from the Murray River. Last Supper clichés aside, in this neat inversion it’s an inedible feast made from an element that shouldn’t be there: soil salination threatens the production of food in the area.

By preserving food, salt has extended the life of harvests and meat from hunts, and shaped world histories along the way, yet this work pointedly lays out the profound impact it is having on our soil and the grim future repercussions of salination for all to see. Commissioned by Hazelhurst Regional Gallery and Arts Centre, The Last Supper is likely to have resonated as a very ill omen indeed in the communities of the regional galleries where it has been widely seen. The  sense of greed and excess (cupcakes are piled up next to platters of lobsters) can’t be ignored either. This is, after all, a final meal, after which there is no more. Overconsumption isn’t sustainable.

Sometimes artists lead the way in activism for positive change. Sydney-based artist and cultural worker Diego Bonetto grew up in northern Italy. His particular tacit knowledge from that cultural landscape, in which seasonal food is foraged as well as grown, has been transplanted and has flourished. Bonetto’s expertise in edible weeds and food foraging forms a major part of his practice.

He has created plant maps of Sydney and conducts foraging tours, talks and workshops (cue aforementioned celebrity chefs). With artist collective Branch Nebula, Bonetto led the one day Food Fight festival earlier this year, shining a local light on food security in partnership with Liverpool City Council and the Museum of Contemporary Art’s C3West program. While usually working with councils and arts organisations to draw attention to overlooked aspects of urban life and communities, Bonetto was also part of Futurelands2, a weekend of art, innovative agriculture and ecology at tiny Kandos in the central west, home of the Cementabiennial contemporary arts festival.

The landmark collaborative installation, barrangal dyara (skin and bones), 2016, by Jonathan Jones in the Sydney Royal Botanic Gardens, was imbued with merged senses of cultural loss and regeneration, mourning and retrieval, of tracing the past and sowing the future. At the literal centre the artwork was a field of kangaroo grass. This food plant was cultivated before the European invasion and is one of many Indigenous crops whose existence white history erased for the purpose of its terra nullius narrative: how much more easily the nomadic hunter-gatherer can be ignored than the agriculturalist.

This crop, and many others, was successfully cultivated over thousands of years in Australia, including a kind of rice that needs little water to grow. (Useful, much?) The first peoples of this continent were making bread at least 30,000 years ago. In the barrangal dyara (skin and bones) catalogue, the writer Bruce Pascoe points to eyewitness accounts by early European explorers of thriving Indigenous agriculture. We may be ignoring this expertise in arid-climate food production, with its trialling period that feels almost geological, at our peril.

My own 2015 work, We Are Still Alive, distributed locally-generated sourdough bread culture to gallery visitors. This project used the survival of the yeast culture through communal nurturing as a metaphor for cooperative labour outside the neoliberal economy. Sharing local food resources like this reminds us that the universal need for food, primarily for sustenance but also for cultural identity, is too important to leave to the market to regulate. (Nestlé’s ongoing theft of water from communities renders this point acutely.)

Artists like those discussed above key into the idea that our future may rely on locally-sourced food, often grown on a modest scale. There won’t be much point nailing Will-and-Steve-from-Sydney’s ‘Pigeon Salad with Caramelised Pear and Asparagus’ in the future unless we can rear the pigeon and grow a pear tree and an asparagus bed. Any produce grower will tell you that the latter two are both long-term commitments vulnerable to climate change. And, incidentally, they’re not in season together.

We love to celebrate food. (I dare, I just DARE you to search Instagram for #foodporn.) But our food future looks bleak without some bold conversations and actions. Harnessing the Indigenous expertise exemplified by Emily Kngwarreye and being brought to our awareness through projects like Jonathan Jones’s, recognising the tacit knowledge of Diego Bonetto, using art as activism in projects like my own, and presenting the heart-breaking material evidence of soil degradation as do Julia and Ken Yonetani is a start. 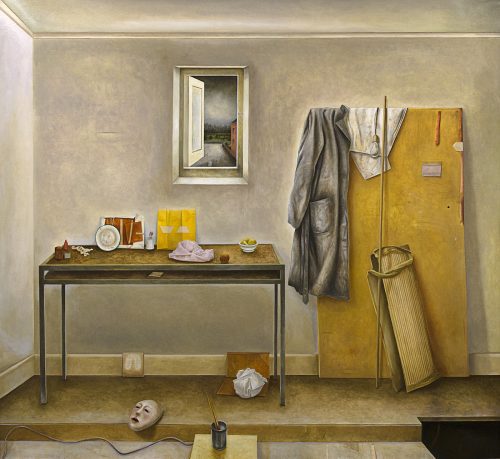 John Scurry’s small paintings are formless and atmospheric, evoking only a suggestion of landscape or the misty hues of dawn. 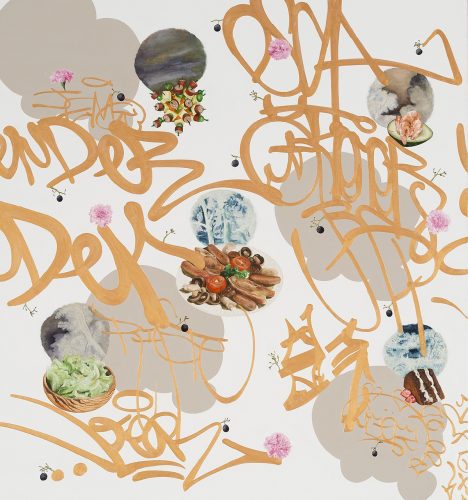 Stieg Persson’s practice has dealt with a multiplicity of themes over the decades. His survey show reveals this polyphony, steadied by art history.