The Brett Whiteley Travelling Art Scholarship turns 20 this year and Steve Dow took this opportunity to talk to three recipients, Tom Polo, Mitch Cairns and Sally Anderson, about travelling to Paris and the impact of the scholarship on their painting practices.

Western Sydney artist Tom Polo has been installing The Most Elaborate Disguise for The National exhibition at the Art Gallery of NSW. This suite of 40 paintings plays with notions of portraiture in psychological spaces. Polo created these works on paper in 2016, during his three-month residency at the Cité Internationale des Arts in Paris as a recipient of the Brett Whiteley Travelling Art Scholarship.

Polo stayed in Europe for six months. Paris was followed by a shorter professional development residency in London, where he made art in an Acme Studios space for six weeks, and he also travelled to Italy. Being awarded the Whiteley scholarship, which is celebrating its 20th anniversary in 2019, “was a nice opportunity to stop and reconsider what it meant to be practising, as someone who works largely in painting,” he says.

“I never questioned or had a doubt [about painting], but I thought, ‘What do I want to do with my work?’ The best thing about the scholarship is it gives you the time and space. It’s an incredible privilege to be focusing on what you’re interested in.”

While in Paris, Polo also researched a collection held by a foundation dedicated to French painter and sculptor Jean Dubuffet, whose influence can be seen across Polo’s work. Polo says he is interested in Dubuffet’s notion that the world is all there in the canvas. “In flat, undistinguishable space, the whole of the world is contained,” explains Polo.

Work by all 20 young Australian artists who have been awarded the Whiteley scholarship to date has gone on show at the S.H. Ervin Gallery in Sydney. The show also includes the four artworks that gained Whiteley the Italian Government Travelling Art Scholarship in 1959: Abstract Autumn, Dixon Street, July, and Around Bathurst, all painted when he was around 20 years old.

The Paris-based Whiteley scholarship was created in 1999 with an endowment from Brett Whiteley’s mother Beryl in recognition of how her son benefitted from studying the likes of Duccio and Piero della Francesca in Rome before heading to London, where the attention he gained at the landmark 1961 exhibition Recent Australian Painting at the Whitechapel Gallery launched his international career. The Tate Gallery purchased the young Whiteley’s work Untitled red painting, 1960, from this exhibition.

The scholarship created in Whiteley’s name also comes with funding (currently $40,000 AUD) to help an artist stay in Europe for an additional three months after the three-month Paris residency.

The scholarship is open to Australian painters aged 20 to 30 years old. Born in 1985, Polo just made the age cut-off when he was awarded in 2015, but that life experience had given him a set of methods. “I use conversations with somebody that I know or something that I’ve overheard as a departure point in the work,” he explains.

Did the Whiteley scholarship experience change anything about Polo’s artistic practice? “It just gives you a sense of confidence to trust what you’re interested in; this idea of looking and responding as an inherent act of who we are.”

Paris is still “an example of a city that matters” says Polo. But he adds, “Artists can and should still be looking as widely as possible.”

Mitch Cairns, born in 1984 in Camden, south-west of Sydney, was awarded the Whiteley scholarship in 2012. Judge Del Kathryn Barton praised the “sensitivity of surface, composition and of paint” in his winning body of work. Yet when he arrived at the Cité Internationale des Arts in Paris, Cairns says he didn’t want to paint.

“I knew that my studio practice wasn’t able to do much with a three-month painting window. So I drew a lot, and made lots of lino cuts, and wrote a suite of poems which, on returning to Sydney, I worked with a screen printer to exhibit.” Those printed poems are on display at the S. H. Ervin exhibition.

Is Paris still an important city for artists? “Obviously it depends on each artist,” says Cairns. “My principal memory is it was a bit of a beautiful, antique European city. Paris definitely is crucial to understanding modern art and pre-modern art, but I was confused as to whether it was pivotal in terms of contemporary practice… In terms of its importance today, I’m pretty sure that’s a question that will always be in flux.”

Cairns used Paris as an archive. “I was unsure what to do when I got to Paris; I forgot. There was a buffet of post-impressionist painting there, which I encountered during art school I had a strong affection for. That was mainly the thing I pursued, as well as the history of posters and printmaking. Paris was certainly fruitful as a specific site with access to collections, which would be impossible to do from afar.”

In addition to a side-trip to Berlin, Cairns rented a little cabin in the woods of Ireland’s west coast with his partner, artist Agatha Gothe-Snape, whom Cairns painted in his winning 2017 Archibald Prize entry. There, he drew and wrote.

Sally Anderson, born in Lismore in northern New South Wales in 1990, was awarded the Whiteley scholarship in 2017. She knows “for sure” her experience in Paris will impact her work. She made one of her three works on display at the S.H. Ervin, Sydney’s Banksia in Paris, 2018, while there. She started a lot of paintings there, but she was keen to absorb the city rather than be stuck in a studio.

Anderson’s partner, artist Guy Maestri, and their then four-month-old son August, accompanied her on the trip. Maestri also set up a Paris painting studio. The family of three later spent time in London while the Frieze art fair was on, and viewed a lot of contemporary art at commercial galleries. “In Paris, while they speak a lot of English, you’re still intimidated going into galleries. In London, it was great. I saw a huge show of Irish artist Sean Scully’s work, which I love.”

The trio also went to Italy, mostly Florence. “It was pretty full-on,” says Anderson of taking their newborn. “His sleep dictated how long we could spend in places, but it was great.”

A painting from the body of work that won Anderson the scholarship, Dilling’s Bromeliads with Gullfoss Falls, 2016, is on display at the S. H. Ervin. It carries a large flower detail beneath a postcard-type waterfall image. “A lot of my work talks about how landscape and objects can hold and trigger memory and experience,” says Anderson. “The bromeliad for me is symbolic of an emotional time I went through … but art allows other people to bring their experience to it.”

In Paris, Anderson saw originals of Monet’s water lilies for the first time. “I saw a lot of Picasso’s works and there were rooms devoted to studies of his works, and Matisse and Édouard Vuillard, an artist I’d never heard of. The Brancusi studio has informed my desire to make three-dimensional work, which hadn’t been on my radar before. You’re constantly surprised.”

For the young artists stepping into Whiteley’s shoes, Paris’s strength as a city will always be debated. Just like the ever-present question of whether painting is dead, the answer, of course, is that the City of Lights still matters – particularly as future scholars find a gateway to Europe and fresh inspiration and mediums for their art. 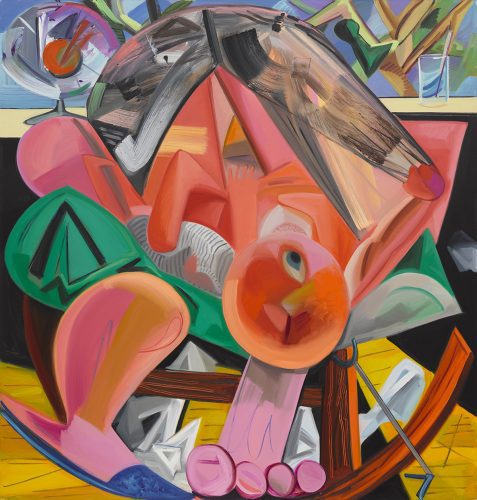 In this first series of Five on Five we’re asking five painters to speak about a painting that has influenced, inspired or resonated with them. In this episode Kylie Banyard reflects on Breastfeeding (2015) by American artist Dana Schutz.