In Australian Art Exhibitions: Opening Our Eyes Joanna Mendelssohn, Catherine De Lorenzo, Alison Inglis and Catherine Speck trace the history and impact of Australian art exhibitions, from the mid 20th century to the present day. In the extract from the Introduction reproduced with permission below they note that exhibitions are a mirror of contemporary culture.

When we began to write, we saw 21st century Australia as a lively yet self-questioning multicultural society, vastly changed from its 19th century self as a culturally cringing former colony whose proudest export was its departing intelligentsia. By the time the book was completed this was no longer the case. Poet and critic Alison Croggon’s assessment of Australia as ‘a nation in which poverties of every kind are being imposed from above’, rings true.(1) The self-confidence of only a few years before has retreated into a curious modern version of Australia’s ancient cultural cringe.(2)

Despite this retreat visual artists have joined with writers, musicians and performers to question the way in which our country, and the world, is moving. This study focuses specifically on the visual arts and how art exhibitions echoed the changes that were happening–in some cases prophesying them. In undertaking this project we have uncovered different histories hiding in plain sight. While many Australian art museums can track their origins to the 19th century, the kind of art exhibitions we now take for granted are much more recent.

Exhibitions are ‘part spectacle, part socio-historical event, and part structuring device’, but their role and function is to ‘establish and administer the cultural meanings of art’.(3) Those who enabled modern art museums to show exhibitions are the directors, curators, registrars, exhibition officers, educators and public programs staff. These are the magicians who have changed forever our cultural landscape. This book then is a history of a time when the act of viewing art came to matter to many Australians.

Exhibitions, which are almost always a collaborative exercise, are the events that both reveal the art of the past, and give an understanding of the present in ways that words rarely can.

Most accounts of the broad sweep of Australian art history, the ‘grand narratives’, have been written by art historians, an academic discipline governed by ideas in which theoretical and historical frameworks govern an unruly world. Bernard Smith’s Place, Taste and Tradition of 1946 set in place a conceptual time-based framework that survived many later iterations, including Smith’s later Australian Painting (with further additions by Terry Smith and Christopher Heathcote), which in turn served as a model for Robert Hughes and Christopher Allen.(4) Smith has also served as a stalking horse for later theoretical deconstructions and for over fifty years has continued to influence later art historical approaches.(5) This is evident even in Sasha Grishin’s recent encyclopaedic study, which adopts a thematic approach.(6)

Curators cannot forget the individual works of art, the way they relate to each other, and where they belong in any consideration of the artist’s total career. Andrew Sayers has written of the impact of his time as a young registrar working in the then subterranean storage of the Art Gallery of New South Wales (AGNSW) seeing Australian art as ‘much richer, more complex and more … rounded out (often with mediocrity, sometimes with failure) than the well-established orthodoxies’ he had been taught.(7) His experience of relating directly to works of art and selecting them for exhibitions helped shape his book Australian Art, and made it the most readily accessible introduction to the field of Australian art history.(8)

The term ‘curator’ is not without its complexities.

Daniel Thomas has drawn attention to the twin roles of collection curatorship and exhibition curatorship, or what Robert Storr has called ‘exhibition makers’, the latter often carried out by those not attached to collections.(9) Thomas himself observed that in the early 1970s as he was no longer a ‘curator of everything’, he began making exhibitions.(10) The ‘rise of the curator as creator’ was an international phenomenon of the late 1960s and the 1970s.(11)The idea of an activist curator, one ahead of the moment, is central to international events in the late 1960s in the landmark exhibitions such as When Attitude Becomes Form curated by Harold Szeemann in the Kunsthalle at Bern, in 1969. In Australia it was propelled by Donald Brook’s prescient ideas of linking the flight from the object to ‘the element of contemporaneity’.(12) Irit Rogoff has talked about curators framing exhibitions through ‘a series of principles and possibilities’.(13) More recently Nick Waterlow’s notes in A curator’s last will and testament capture that sense of presenting artwork that raises questions: ‘1. Passion; 2. An eye of discernment; 3. An empty vessel; 4. An ability to be uncertain; 5. Belief in the necessity of art and artists; 6. A medium –bringing a passionate and informed understanding of works of art to an audience in ways that will stimulate, inspire, question; 7.Making possible the altering of perception’.(14)

Curators are to a certain extent interpreters and, as such, their audience and reach is broad, their role is to manage and display collections of art held in institutions for public engagement and dialogue. They do this through wide-ranging exhibitions sometimes of their museum’s collection, sometimes borrowing works from many individual lenders. Their methods differ from those of the art historian – an exhibition is not a book on wall, rather it constructs a complex story spatially, and it can take many forms.(15)

An exhibition might start where written histories have stopped and explore the artists left out of earlier narratives as was the case with Ian North’s landmark exhibition of the work of Dorrit Black in 1975. They might challenge what is shown in art museums as did anthropologists Ronald and Catherine Berndt in 1957 and Charles Mountford in 1960, along with Tony Tuckson the same year, when they curated significant exhibitions of Aboriginal art. Exhibitions can also extend art historical knowledge and understanding such as Anne Gray’s 2009 exhibition McCubbin: Last Impressions 1907-17 which took his painting out of its neat Heidelberg box to show his late work as highly coloured, light-filled, loosely painterly – including urban subjects as well as bush landscape. Other exhibitions function as socially critical documents such as the confronting National Gallery of Australia (NGA) exhibition Don’t Leave Me This Way: Art in the Age of Aids, shown in 1994 as a public expression of grief.

Exhibitions function as the public face of art history, and they are now the medium through which most art becomes known.(16) They are also the principal way the public encounter and make meaning of our art and our artists, with Australian art museums continually developing exhibition programs for a growing public audience. According to the 2015 Arts Nation report on the Australian arts, 94% of Australians attend live events, visit art galleries and read literature, and 85% agree that the arts ‘make for a more rich and meaningful life’.(17) At a time when university art history departments appear to be shrinking, art museums work at expanding audiences. The National Gallery of Victoria (NGV)’s Howard Arkley 2006 exhibition Carnival in Suburbia which featured psychedelically coloured domestic interiors and exteriors of sedate suburban dwellings ‘with a lurid vitality which makes them like a crazy vision of heaven’, brought in an audience of the hip, chain wearing leather brigade sympathetic to the recently deceased artist’s drug habit which led to his accidental overdose. (18)

Australian Art Exhibitions: Opening Our Eyes is available from Thames and Hudson and all good bookstores.

7. A Sayers, ‘Curators and Australian art history: a personal view’, Journal of Art Historiography, No 4, 2011.

8. A Sayers, Australian Art, OUP, Melbourne, 2001. Although out of print, this is freely available via the NLA Open Library project.

15. A Wallach, Exhibiting Contradictions: Essays on the Art Museum in the United States, University of Massachusetts Press, Amherst, 1998, p. 121.

16. For an in depth discussion on the significance of exhibition spaces in shaping perception, see C Klonk, Spaces of Experience: Art gallery interiors from 1800 to 2000, Yale University Press, New Haven & London, 2011. For an analysis of these ideas within the Australian context, see C Speck & L Slade, ‘Art History and Exhibitions: Same or Different?’, Australian and New Zealand Journal of Art 14, no. 2 (2014), p.p. 141-50. 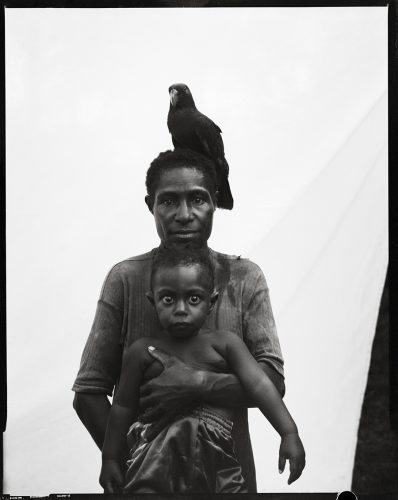 In Stephen Dupont’s The White Sheet Series it is the curious bystanders standing adrift that captivate. 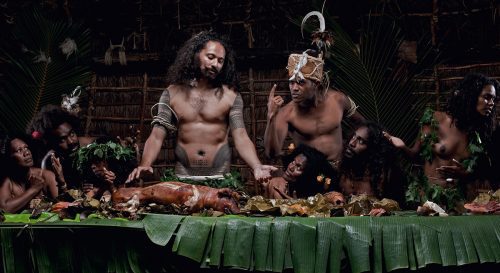 A complex photo installation and three-dimensional sculpture, including a backlit crypt made of wood, will be central to the exhibition.