Virtual reality has for a long time belonged to the future. Throughout much of the 20th century, VR was mentioned in the same breath as jet packs and flying cars, and in many ways it remains pinned to such fantasies. Today, however, if you look around the right art exhibition, you may just find that the future has already arrived.

VR has garnered significant attention in recent years, with the release of consumer headsets captivating the attention of the broader public. The most advanced of these, Oculus Rift and the HTC Vive, have been widely hailed as transformative, as they simulate entire virtual worlds for users to inhabit. Although VR was once almost exclusively the domain of specialists and gamers, these devices have made the technology accessible to the masses. While the current VR market is still relatively small, and is only valued at a paltry US$6.7 billion, financial analysts at TrendForce estimate that the industry will be worth US$70 billion by 2020.

In the face of this growing enthusiasm, it is somewhat surprising that many art institutions have been reluctant to adopt these new technologies.

Indeed, bar a few noteworthy exceptions, the potential of VR has largely been left unexplored by the major galleries.

Professor Sarah Kenderdine, an expert in the field of VR, understands the possibilities of the technology. Kenderdine has worked both domestically and internationally on some of the most significant VR shows to date, and she is the director of visualisation at UNSW’s interdisciplinary Expanded Perception and Interaction Centre.

Her work, Pure Land, was one of the main features in the Art Gallery of NSW exhibition Tang: Treasures from the Silk Road. In collaboration with the Dunhuang Academy, Kenderdine and Professor Jeffrey Shaw created Pure Land to virtually simulate the UNESCO World Heritage listed Mogao Grottoes. Holding an iPad in front of them, gallery visitors walked around a room in the AGNSW, while being virtually transported thousands of kilometres to the grottoes in Dunhuang, Western China.

Works such as Pure Land point to the fertile opportunities that exist for VR and art more broadly. But, according to Kenderdine, there remains an entrenched unwillingness to invite new technologies into a space that has traditionally been the domain of tangible objects. “There are still a lot of curators who are very threatened by these kinds of modalities of experience,” Kenderdine says. “It seems the closer you go to virtual reality, or their perception of virtual reality, the more anxious they become.”

Although some may worry that VR poses an existential threat to galleries (as our experiences of artworks are no longer tethered to their locality) Kenderdine sees it differently. For her, VR is something that marries into our current museums, rather than replaces them. And, with the ever expanding cost of contemporary art limiting the capacity of museums to acquire significant works, VR may come to be seen as a more viable option.

But even today, VR technology has the ability to greatly enhance a permanent collection. One of the perennial issues faced by most major museums is that only a fraction of their total collection is ever on display. “At the British Museum it is 0.4%, at the Smithsonian it is 2%, and at the Museum Victoria it is 0.8%,” Kenderdine says.

This means that, on any given day, a visitor to any one of these institutions is missing out on the overwhelming majority of their pieces.

Working with Timothy Hart, the director of public engagement at Museum Victoria, Kenderdine was able to pioneer a solution, in the form of an interface called mArchive. Drawing upon Museum Victoria’s already established records, mArchive allows visitors to view and navigate around some 80,000 pieces. Standing in the centre of a 360 degree three-dimensional exhibition screen, a user becomes completely immersed in the collection.

While projects such as mArchive demonstrate the utility of VR in enhancing a collection, Kenderdine is quick to emphasise their value as independent works. She believes that VR projects should not be distilled down to their ability to complement other works, but should instead be seen as “experiences in their own right.”

Nonetheless, reluctance to adopt VR persists. This may be due to the widely held fear of technology ageing, a concern which is entirely understandable. Even at the consumer level, a new iPhone model seems to be released every other year, rendering all others old, if not obsolete. Indeed, in a society that is obsessed with the new, it is fair to ask whether or not it is truly wise for a gallery to invest in a large-scale VR machine.

But the issue of ageing technology does not keep Kenderdine up late at night. Her confidence is built upon the knowledge that many of the so-called ‘old’ VR projects still impress audiences today. “If I show people work that was made in the 1990s in our lab and I ask them when it was made, they know it is trick question, and they go, ‘Oh, four years ago.’ But we’re talking 25 years ago,” she says.

Indeed, despite the perception of VR as a new phenomenon, the technology actually has a far longer history than most people realise. Kenderdine maintains that seemingly new innovations, such as the expanded cinema formats emerging in Hollywood and immersive 3D paintings that have captivated social media, are in fact treading well worn ground. And while she notes that all of these artistic expressions are valid, Kenderdine makes it clear that “the notion that VR is suddenly new is a completely false one.”

For Kenderdine, the real future of VR is in producing participatory experiences, which invigorate people and promote interaction. She doesn’t want the public to be “passively watching a 360 degree movie” or locked into a self-imposed isolation that comes in the form of a headset. Rather, she wants them to be directly engaged and part of the action. Kenderdine is adamant that “there is a massive appetite out there for this stuff.”

And her ambitions are not modest. “We hope it will change the nature of museum-going forever, should they ever get up the nerve to do it,” she says. As with all things, only time will tell. 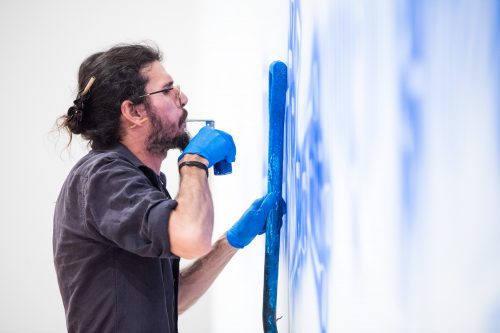 Dale Harding graduated from the Queensland College of Art in 2014, yet his opportunities and achievements since speak to a much longer practice, indeed a “cultural continuum” to which he is connected through country. 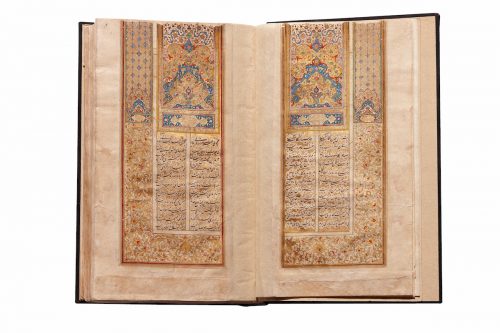 Love From Damascus: The art of devotion in Islam

Love takes many forms. In Love From Damascus: The art of devotion in Islam, love is expressed through prayer, spirituality, hospitality, friendship, and sex. It is woven into textiles and adorned with gold leaf; shaped into silverware and glazed into tiles and pots.